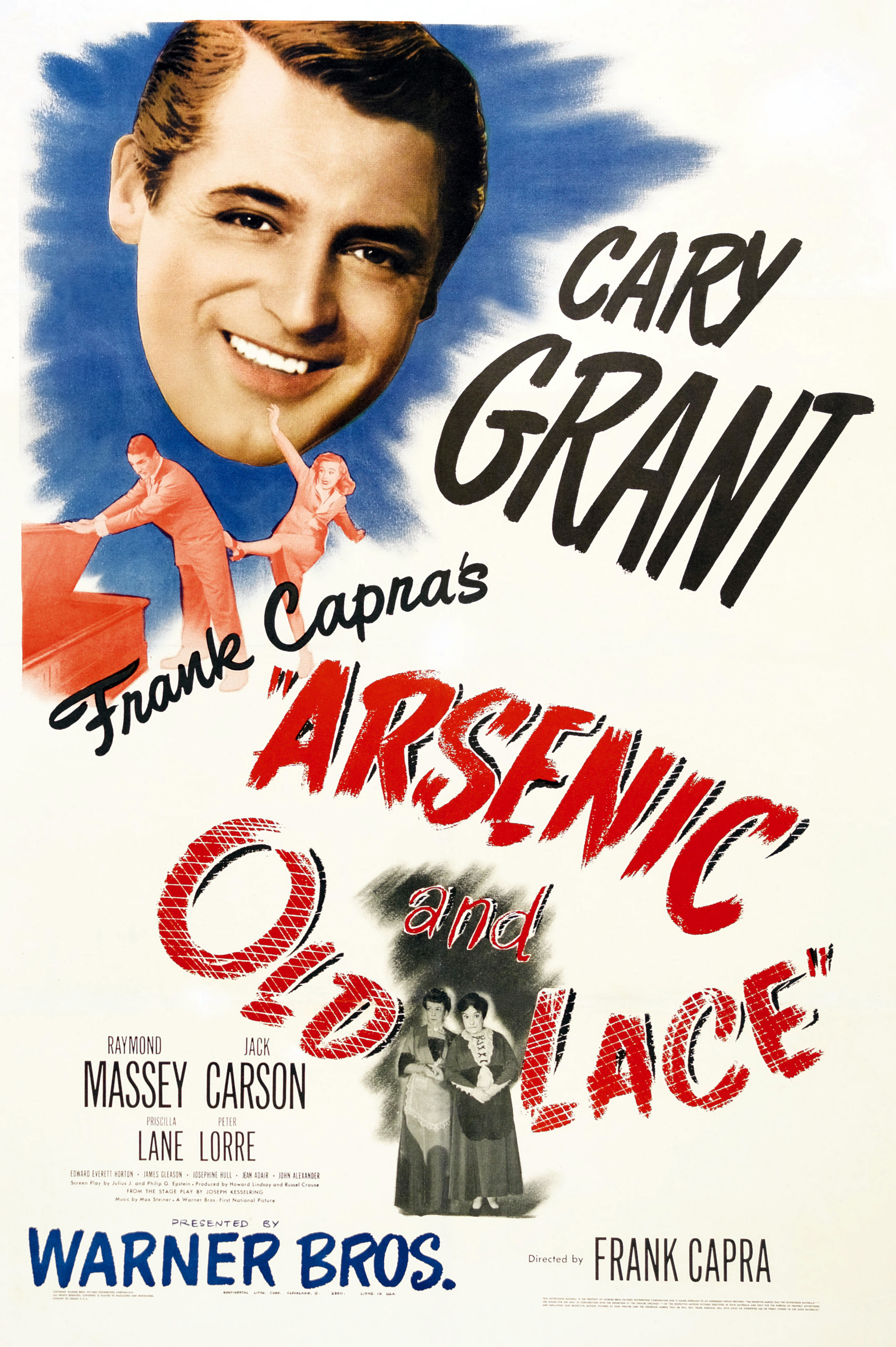 It’s time to look at a comedy/parody film from a while back. I’m always up for that combo that’s for sure. The plot is pretty out there but of course the unnerving part is that it may not have been all that difficult to pull off a scheme like this back in the day. With all of the characters acting rather insane here you’ll have to try to keep up and see who has the upper hand by the end of the film. The lead definitely changes a lot as things go on.

The movie starts with Mortimer and Elaine about to get married. He’s feeling pretty shamed about the whole thing because he was always a huge critic of marriage in general. He just changed his tune after meeting up with Elaine. After being married they’re ready to go to the Honeymoon but just have to go home for a few minutes to say their goodbyes and such. They live next door at least so they’re close to each other. Unfortunately, it turns out that Mortimer’s two aunts Abby and Martha have been going around murdering people. They have a sign that says room for rent and then any guy who walks through the door is promptly poisoned and buried. They have already bumped off 12 people. Mortimer decides to pin the blame on his brother Teddy who believes that he is actually the President of the United States Teddy Roosevelt. Complicating matters is the fact that Mortimer’s other brother Jonathan has escaped from jail and intends to make this his new home. Can Mortimer solve all of these problems in time to get back to Elaine and enjoy the honeymoon?

Mortimer’s character arc in the early part of the film is definitely the Hollywood dream. That while you may be a skeptic of falling in love and all you will eventually break once you meet the right person. Mortimer certainly didn’t last long after all since this was literally the first scene of the movie. I think being against marriage is definitely not the right play though. If you’re content to be single that’s one thing but if you still want romance without marriage then that’s a mistake. Being committed to one person for the longhaul is far better than deciding to stay free during the relationship. This doesn’t play almost any part in the movie though.

From all the plots, the one with him and Elaine gets the shaft. Basically any time she tries to enter the house Mortimer stops her or she gets involved with the murder conspiracy. Nobody’s really of any help to her when it counts aside from Mortimer so at least he helps out. He handles that situation rather poorly though. She has a point that they just married and he is already ignoring her and pushing off their events so that’s not a good start. Mortimer really doesn’t have any excuse for being like this either so that hurts him a bit as the main character. I think this plot almost should have been cut out or at least handled in a very different way.

The main plot is of course about how crazy the family is. It’s not every day you see old ladies like Abby and Martha just bumping everyone off like this. They were really on a roll with taking everyone out of the picture. I can’t say that I was a fan of them though. A more reasonable main character would have been able to win the verbal debates a little easier but Mortimer would keep on getting defeated at every turn. If anything Jonathan and Herman did better but that’s due to the fact that they’re total villains of course. Then you have Teddy who is pretty insane the whole time and never really ends up helping the heroes.

The cops show up a few times and I do like the younger one. He seems like a very earnest guy and just wants everyone to read his script. Nothing wrong with that although he does get quite distracted at times so he probably needs to show a little more restraint. Jonathan is certainly an intimidating presence here with the only character who is able to stand up to him being Mortimer. That’s one angle I would have liked to have seen more. Mortimer clearly doesn’t fear him the way the others do but they don’t get a lot of scenes together. Mortimer usually has to dash off to try and frame Teddy or something like that. The closest we get is when Mortimer is trying to blackmail Jonathan with the body in the chest.

Of course Herman is also a fun character. He certainly gets drunk a lot and constantly seems stressed out. He’s just as villainous as Jonathan despite being this timid though which is clear in how he still helps carry out these plans at the end of the day. Surely he would have put a stop to this if he had a moral compass. So there are quite a lot of characters running around here that’s for sure. The film is surprisingly long and that allows it to push all of these plots forward quite a bit.

It’s definitely a pretty fun film. In some respects I felt the writing could have been better but there’s enough funny moments to keep the pacing tight. You won’t get bored or lose focus during the movie, I can definitely say that. Surprisingly the poisoned drinks don’t actually get much of a focus after the first scene. That’s okay with me though because it makes for a solid red herring throughout the film. You just never know when the characters are going to bust it out. The best scene in the film to me is when Mortimer tries explaining to Herman how the main characters of the plays he critiques aren’t very smart at all. Did I mention that he was an art critic? Like I said, there’s a whole lot going on here.

Overall, This is a pretty solid murder parody. It’s definitely been tough for the town with everyone getting bumped off though. It’s a subtle reminder that you can’t just trust anyone even if they appear harmless. As long as you like a good blend of thriller and parody you’ll definitely enjoy this film. There’s a lot to like here and quite a lot going on. The constant suspense of hiding the bodies keeps the film interesting and of course you have to decide who to root for. The only reasonable option here is the cops since everyone else is either a murderer, accessory to murder, or trying to frame someone else for the murders. It’s pretty fortunate for Elaine that she wasn’t in the house or she would have also gotten mixed up in all of this.