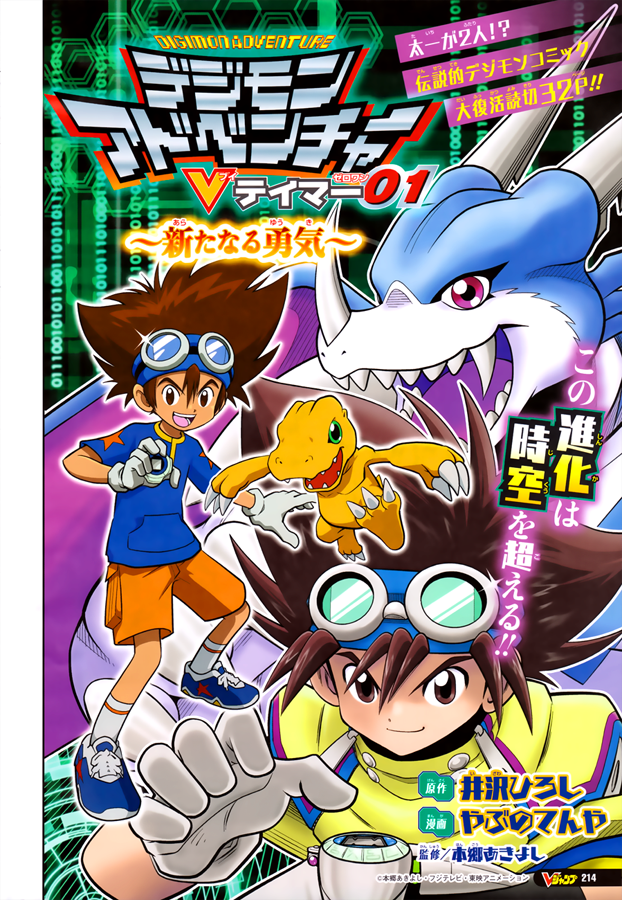 It’s time to look at a quick one shot that came out for Digimon a while back. It’s been ages since I read the original V-Tamer manga so I need to give that a re-read someday. Still, it’s nostalgic to see Tai and Zero once again. Those two definitely made for a good combo and the Veemon digievolution line is pretty fun. Since the Tai from the show is pretty early on his Agumon can’t quite compete but the story finds a way for them to be equals this time around.

The story starts with Tai (TV) suddenly falling into a parrallel world. He has entered the Digi World of the manga universe. Tai (Zero) quickly fills him in on what’s going on. After the world was saved, a new digimon has appeared. This Digimon is alive to an extent but effectively it’s a large portal that can spit out a bunch of other Digimon. Zero’s been holding them at bay but the Digimon appear to be endless. Also, an unfortunate side effect of saving the world is that Veemon can no longer access his Mega forms. As a result it’s an uphill battle. Agumon can only go to Greymon form so that doesn’t help either. Can these two really save the Digital Planet?

Since this is just a one shot at 30 pages they do have to find the answer to this pretty quick. It’s a solid team up though with both characters getting their respect. The Zero version is pretty serious as always and I still love the cape. He does a lot of the heavy lifting here. Meanwhile the TV version is very optimistic and ready for action. He’s able to compensate for being the weaker fighter here by showing his courage and allowing the Digimon to shatter their limits. We get a pretty solid final blow as well.

Most one shots have a fun enough story where I feel they could have been a whole series or at least a volume. This is one of them since they could have had a lot of cool interactions if it lasted longer. The writer did what he could with what he had to work with though and it works out well. It’d be nice if they ever licensed V-Tamer 01 in America someday. Then they could tack this on to the end of the volume or something.

The art is definitely solid. The artist does a good job of making the two Tais look a little different. Aside from the outfit, it’s worth noting that the manga version is a little older so he’s also drawn as being taller. This is done consistently during the chapter so the attention to detail is on point. This definitely isn’t a chapter that was just thrown together at the last second. It’s also a good way to tie in to the new show and raise a bit of hype. I can never turn down a crossover so that’s definitely a good thing.

Overall, A New Courage is an appropriate title as it ties in to what is going on here. Magna Angemon’s predictions ultimately ended up being right on the money. If you’re a Digimon fan or just like some good action then this is a good chapter to check out. It’s got that nostalgic beat to it which is always good and even without that it’s just a good story in general. Nothing to dislike here that’s for sure. Hopefully we get some more Digimon manga in the future. I feel like it’s definitely been way too long since we got another title.