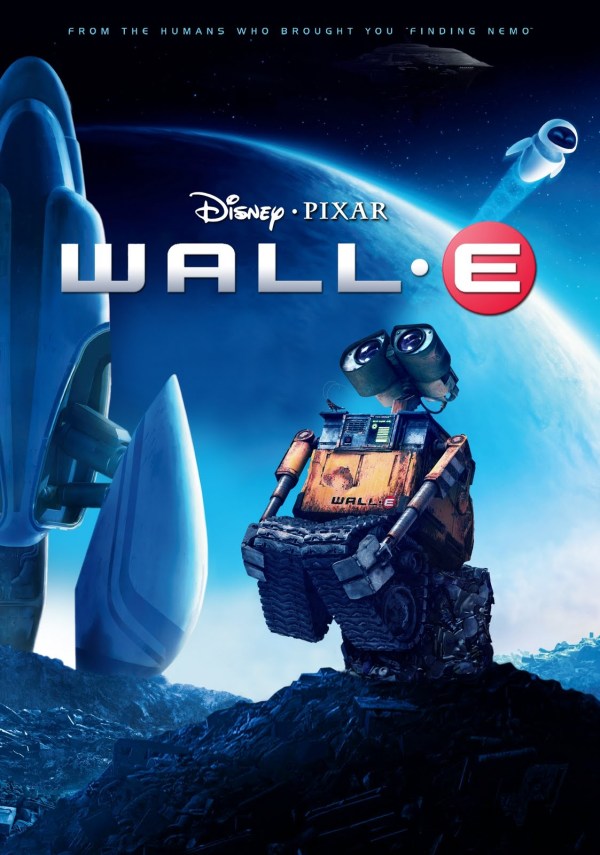 Wall E is a very well known film that I hadn’t gotten around to seeing yet. It always looked like a lot of fun and after seeing it I can certainly say that this is a quality film. Wall E has a good amount of drama and heartfelt moments. I also liked the little moments of danger we got near the end. Despite the apocalyptic backgrounds this isn’t an action film so don’t expect any big confrontations. This is more of a story about why you can’t get too dependent on technology or you are going to be in pretty big trouble.

The movie starts out by introducing us to a desolate Earth. Humans have already fled the planet so Wall E is really the only bot left. He goes around cleaning up the litter but it does get boring after a while. Fortunately another bot named Eve shows up one day which makes things more fun for Wall E. He finally has a friend even if she is deadly serious about her business. They stick together during the tough times when she has technical difficulties but their calm life can’t last forever. Eventually she has to go back to where the humans are to report that it’s safe to return to Earth again. The issue is….what if someone doesn’t want them to go back to Earth?

Now it’s hard to really tell where to end the plot summary as even what I have put there feels like it goes pretty deep into the film. Still, I feel like that’s a fair dropping off point since that’s where the first real conflict begins. It’s from that point where we can really get the characters in some danger. The first half of the film manages to get by without a lot of dialogue which is impressive since the backgrounds and aesthetic have to really speak for themselves here.

The animation is definitely solid though and it holds up well to this day. The opening backgrounds with the destroyed cities reminded me of Advent Children to an extent. Wall E’s design is also fun and looks a whole lot like ROB the Robot. The laser blasts from Eve are also on point. Then you have the soundtrack which is good. It may not be too extensive or anything like that but the tunes are memorable and work well. The film has a lot of energy throughout.

The pacing is also on point and the writing is good so you have all the fundamentals for a solid film. As a main character Wall E is also fun to follow on his journey for friendship. He may not be able to talk a lot but he’s a nice guy and always means well. Whenever he thinks Eve is in trouble, Wall E jumps in to help and save the day. Meanwhile Eve is a solid heroine. She is definitely packing heat with her energy blaster which really comes in handy. She has to be one of the strongest characters in the film although unfortunately her reaction times aren’t always on point so enemies get close enough to turn her off more than once. That’s definitely something she would have to work on for a sequel.

Then you have the antagonist who is pretty solid. I won’t say his name but when he steps in you know that things are about to get dangerous for the heroes. He’s a pretty fun villain who always seems to be able to get the upper hand. I liked the design and you can tell that he’s based off of a popular villain from another sci-fi film. Finally you have the Captain who does well in the end. He may not have made all of the right decisions for a while but ultimately he stepped up when he had too and that’s what counts. You know that the Earth will be safe under his command.

The movie definitely paints a dangerous picture of how the humans won’t be doing so well if they slack off. It’s pretty crazy to see that the humans have given up to the point where they can barely even move or survive on their own. Definitely not their best appearance. I like to think that at least somebody would have stayed strong and resisted the temptations everywhere but I suppose there were no heroes in this era. If anything it’s impressive that they’re still alive at all since most of them barely appear to be functioning anymore. The robots definitely had all of the power here.

Something tells me this film probably won’t get a sequel at this point but there’s definitely a lot you could do with a future storyline. Have an evil robot show up to conquer the planet or maybe half of the humans decide to revolt and try to go back to where they were. It’s fun to think about at least. There isn’t a whole lot more to talk about for this title due to the nature of the film. A lot of the film is really just about enjoying the landscapes and Wall E’s heartfelt journey. It’s all very effective and it’s a unique approach. It’s definitely a style that has to be handled carefully as with weaker writing it could just end up being rather dull and boring like 2001: A Space Odyssey. Fortunately Wall E was up to the task.

Overall, Wall E is a fun film. I wouldn’t say it ultimately rises up to be one of Pixar’s best movies, but it certainly does the job of being a quality watch. There’s a lot to enjoy here from the characters to the solid animation. Once the humans do get involved it’s nice to see them. They may not have stayed very alert but at least they’re all pretty nice people who are ready to help. It shows that this community managed to stay pretty well connected. If you haven’t see Wall E yet then I’d recommend it. It’s a pleasant film that really goes by in a flash.