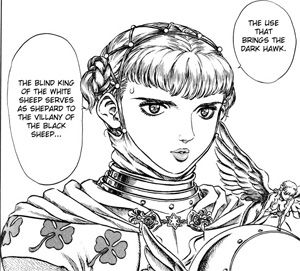 Suggested by iKnowledge Koga is a strong fighter with a good amount of speed and strength. He specializes in combat with his claws as he slices his opponents away. Farnese has some magical abilities such as elemental blasts but she isn’t really used to combat in the same way that Koga is. His experience and skills will be the deciding factor here. Koga (Inuyasha) wins.