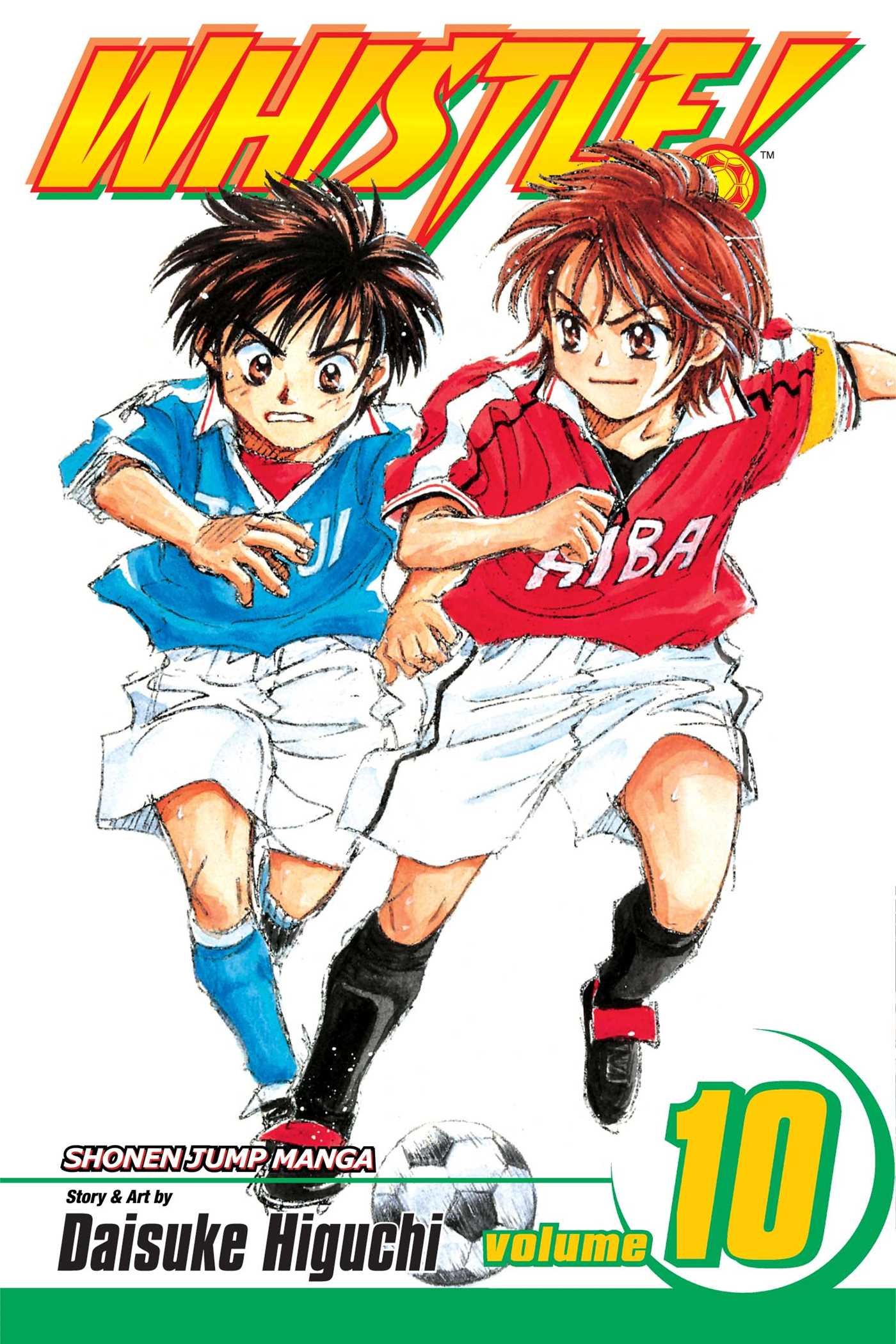 At this point it’s been around 10 years since I started Whistle but I’ve now reached the end of the series. It was certainly an emotional journey filled with a lot of great matches and character moments. I would not put it in the same league as the more intense sport titles like Prince of Tennis, Haikyu, or Kuroko but it’s definitely a solid title in its own right. We even get a physical fight at the end of the series.

The manga is about a kid named Sho who really wants to be a great soccer player. It’s his favorite sport in the world and the guy is always living and breathing soccer 24/7. Unfortunately he’s fairly small which makes it difficult to power his way through against the bigger kids and he’s just not super gifted at the sport. He’ll have to train and practice much harder than the other kids in order to catch up to them but he’s not afraid of the effort. Sho needs to first make it on the team and then he needs to earn his way into a starting position.

The opening volumes of the series really showcase how much distance Sho needs to cross in order to be one of the very best. He does train quite hard each day so it’s not like he’s slacking off but it’s just hard to keep up with the others. Just look at the range for example, they can kick the ball from double the length which is naturally a big advantage. Additionally, it’s harder to body slam someone who’s a lot bigger than you are and while you shouldn’t target players in Soccer, there is a lot of physical contact.

What Sho has for advantages is his speed and determination. It is a little easier for him to maneuver throughout the field and steal the ball if someone lowers their guard. Additionally his stamina is quite good and he’s usually the last player to go down. That works as a good morale boost to the other players when they are starting to weaken a bit. By the end of the series Sho is surprisingly still one of the weaker players. Whistle is definitely going for a higher level of realism than most of the other sport titles and while Sho kept training, so did the rest of the cast. So in the end he didn’t make nearly as much progress as you would have assumed otherwise relative to the others.

The best character in the series was Shigeki though. He’s one of Sho’s rivals and you could also call him the final boss of sorts. He’s one of the guys who helped get Sho into soccer and continued to inspire the lead. He ends up leaving the series for a few volumes but returns better than ever. He’s got a very confident demeanor to him which is important and the guy is an ace in soccer.

Additionally, he is able to fight physically. This comes in handy as he has to save someone from getting bullied. Even when he was outnumbered 8 to 1 the guy held his own. Shigeki never ran from a challenge and only continued to get better and better at the series went on. That’s why he was my favorite character, he left a real impact here.

Tatsuya is the other rival but he doesn’t hold his own quite as well as Shigeki. The main reason for that he that Tatsuya tends to lose sight of what’s really important a few times. He gets jealous of Sho and tries to show up Shigeki on a few occasions. Things never work out for him so he inevitably gets upset and starts playing rather sloppy. It’s not a trait that’s good for the rival since you can’t take him nearly as serious after that. It also happens to Tatsuya more than once which is always a bit worrisome.

I still liked him in the end but those scenes really did a number on the guy. Now that he’s more confident in his own abilities I expect he would look a lot better in the sequel. Then there’s Tsubasa who has a run rivalry with Daichi. Both of them are goalie/keepers for the team so naturally each one wants to be the starter. Interestingly even by the end of the series it’s hard to say who the better player is. I would give the edge to Tsubasa because I found him to be more consistent but it’s really close. 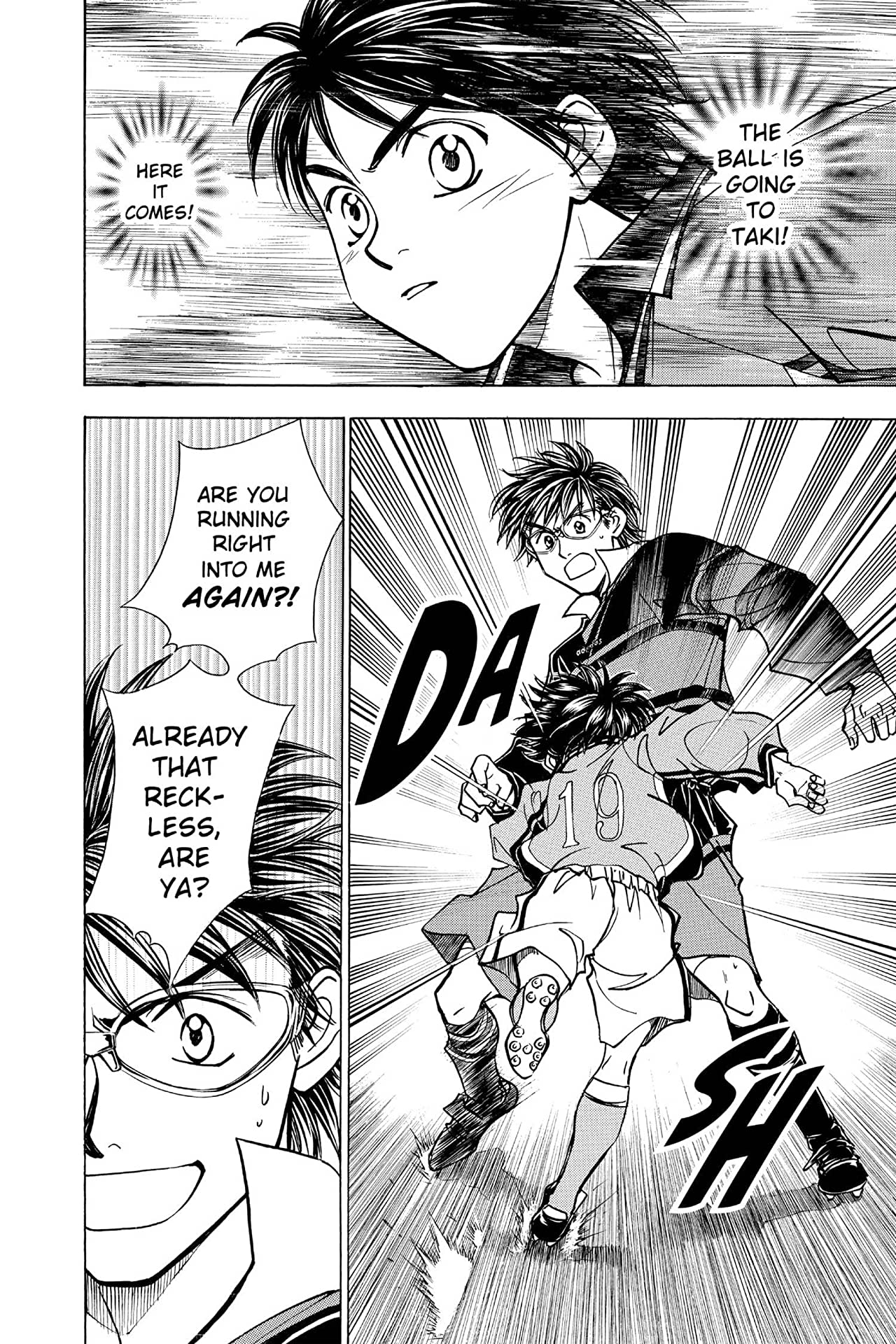 It’s not as decisive as you would expect and due to that both of them get big roles in the final match as they alternate. Tsubasa did start for more periods in the match though so take that as you will. Tsubasa is a very fiery character who is very loud and outspoken. Daichi is more of a quiet guy who tends to speak his mind rather than mincing words. So in their own ways they are both very confident in their abilities but go about showing it in different ways.

Technically Whistle’s cast is a fairly large one but it’s also large to the point where it’s hard to develop them all as much as in other titles. For example Haikyu is the sport title with the closest comparable cast I would say but the series really took the time to develop all of them. Granted, Haikyu is almost double Whistle’s size but by volume 20 I would say they already had more personality.

In Whistle if you weren’t one of the two keepers or rivals then you were most likely not a very notable player. The other kids were good enough to keep Sho out of the starting roster for a while but that’s about it. You wouldn’t really expect them to do much in an actual match though aside from yelling at Tatsuya at times when he would steal the spotlight. Usually they’d start losing points for the team which is when Sho would have to be called back in.

There are some supporting characters outside the team though like the various coaches in the series. They tended to be solid even if they didn’t make too much of an impact outside of the main one. The main coach always chose to believe in Sho and support him when it counted. She did take a bit of a risk near the end of the series but when it’s the main character it’s never a bad idea to try and let him surpass his limits. There was a pro player who happened to be in Sho’s neighborhood. That guy was nice he always helped give Sho some quality advice and told the kid not to give up.

Then you have Sho’s brother Ko who doesn’t do much for most of the series but he does come through when it counts at the end. Whistle goes for a rather emotional ending to be sure but one that has a satisfying ending. If the ending had been fully sad with no recovery at the end then that would have been more on the fishy side. As it stands, it works pretty well as a way to close things out.

Whistle’s artwork does look fairly old. It reminds you of something like Saint Seiya only without the fight scenes of course. It doesn’t hold up to a lot of newer titles but it isn’t bad. You can still recognize all of the characters pretty easily and the soccer games have a proper amount of intensity. The manga isn’t actually as old as it looks but it could be an intentional style choice I suppose or it’s from an artist who grew up drawing in that style so he just stayed in that style.

With 24 volumes at the ready you can expect a whole lot of matches throughout the series. It also gives the author time to let the characters just have some fun and dialogue outside of the matches too. We have time for the heroes to enjoy some good food and hang out. Some titles don’t have a whole lot of time for that so it’s a pretty balanced set up. With this many volumes over 10 years it can be easy to forget some of the early opponents though but the you won’t forget Sho’s struggles. 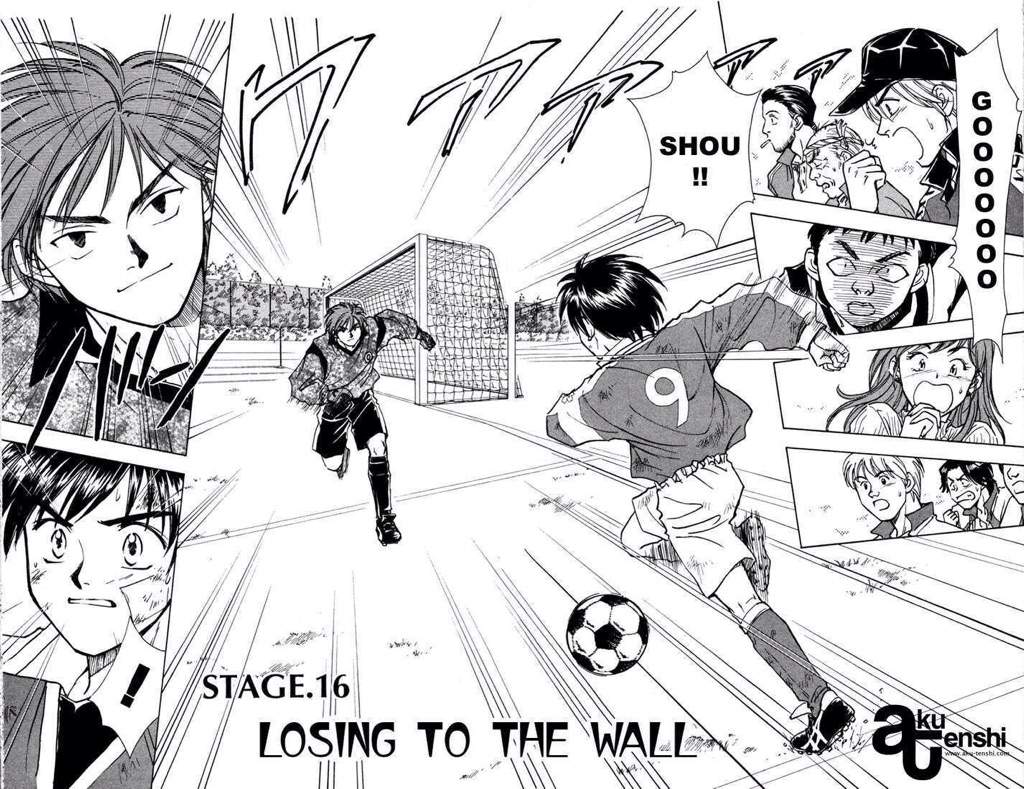 Overall, Whistle is definitely a very good series that I would recommend. It’s a very easy read and like with most sport titles there is a ton of replay value here. There may not be anything super deep or genre breaking going on here but you know that in each volume you can expect some high quality soccer content. It would have been nice to perhaps have seen a time skip where Sho is now one of the best players out there but I guess that will be a job for the sequel series. It would be nice to see Sho’s hard work pay off at some point since so far he has only made some progress. If you like sports or a good story then you should definitely check this one out, the writing is always consistent.