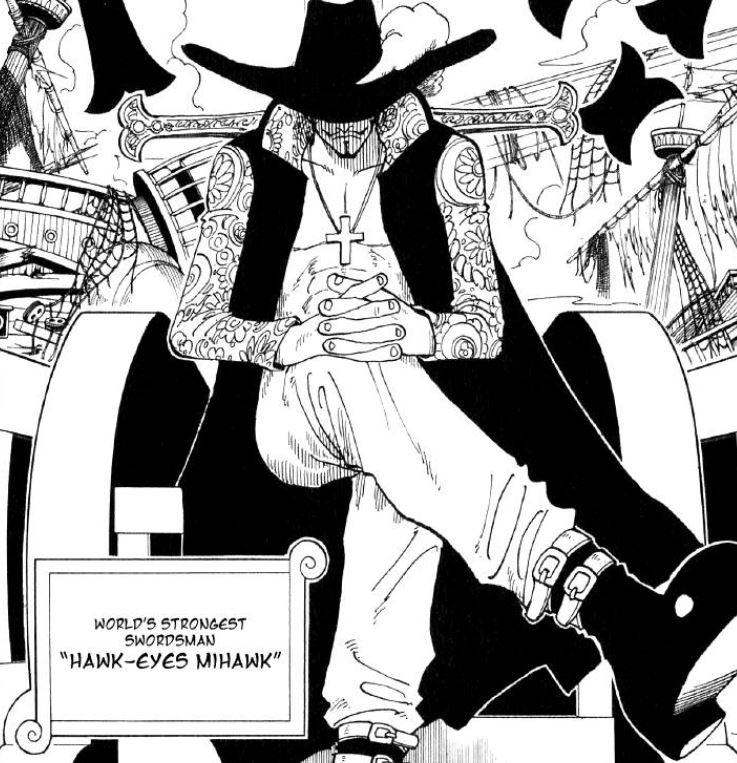 As the title suggests, this editorial is going to discuss if Mihawk is really the greatest Swordsman in the One Piece verse. Now that is a very big title so we definitely want to go into depth here and see if this is really the case. There are a lot of sword fighters in the series after all so we are going to need to qualify this a bit. First I think it’s important that we set straight what the definition of a swordsman is at least on this site.

A swordsman is someone who primarily fights with a sword. That’s the basis of the character and when you think of this individual, a sword should always come to mind as well. So what I’m saying here is that just using a sword is not enough. Put it this way, Goku with a sword could easily beat Trunks but that doesn’t make him a swordsman. Superman could use a sword to beat Katana but that’s because his actual abilities are so much greater. So that’s not what we’re really talking about here. Otherwise just about anyone can use a sword and there have been fighters who have wields a sword once or twice like Goku. It’s not the same thing though so they would have to be ruled out.

That means Luffy doesn’t count as he only used a sword twice. Weapons that are similar to swords won’t be counted either. Now if it’s got a blade like a Katana or something that is effectively a sword then that’s quite all right. Kaido’s Thunder Bagua for example is definitely not the kind of weapon I would consider to be a sword. This is very fortunate for Mihawk I should say since it’s hard to see him tangling with Kaido.

So now that we’ve defined what it is to be a swordsman let’s look at Mihawk’s competition. As mentioned, Kaido is ruled out so that’s one less rival. Big Mom has her legendary fire sword but nobody actually considers her to be a sword fighter. She uses hand to hand combat primarily and the sword is just something she whips out on occasion. Is she close to counting? I’d say yes, if she just were to use the sword a little more often then I would say that is a wrap.

Another fighter we can’t count here is Oden. The title of the strongest is a current one after all and Oden is not around right now. The same goes for Whitebeard and King Roger. If you’re not around anymore then of course you can’t have a claim to being the strongest so that absolutely makes a lot of sense and I would stand by that. This is a title for characters who are alive or at least still moving around.

For primary sword fighters the main rivals then would be Zoro, Shanks, King, Fujitora, Law, and Brook. I can barely say the last name with a straight face though. He is directly weaker than Zoro so we will remove him right now.

Now let’s talk about Law. He is a talented swordfighter in large part because he has his room abilities but he also may have the single best sword feat in all of One Piece when he destroyed an entire mountain range with a single swing. Even characters like Luffy and Kaido have never been able to match that kind of destructive power. I would say it’s fair to count that as an outlier though given that it was so far above what is usually seen as possible in the series. Or if not, you can just scale the other above him anyway.

Additionally Law has taken several Ls since then and generally hasn’t been as impressive. Mix in the fact that his Haki is not developed enough to even damage Kaido and I would say he loses his claim to being the strongest. King is the next challenger and we haven’t seen a ton from him yet so maybe he has some secret abilities lying in wait. At the moment though he appears to be weaker than Zoro so that would rule him out as well. 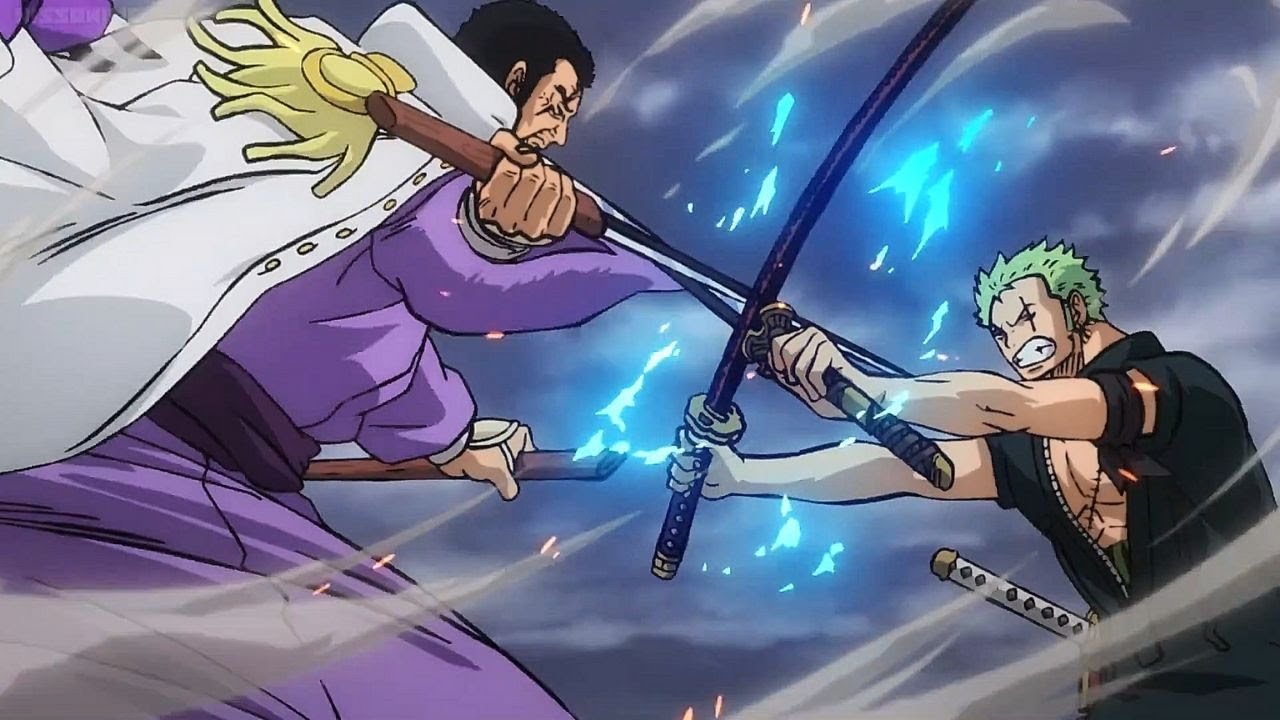 Fujitora is an interesting figure because we just haven’t seen a whole lot of him relative to the others. He’s an admiral which is very impressive but even then we don’t really know how they stack up only that they are weaker than Yonkou’s individually. Zoro was able to briefly stalemate him in one of the films which is really the best comparison we’ve got. Ultimately I don’t see any possible path for Fujitora being stronger than Zoro or Mihawk, both of whom have far more impressive moments.

So we’re down to the big 3, Mihawk, Zoro, and Shanks as the world’s greatest swordsman. So now let’s drill even further down into the definition of the phrase “greatest swordsman” as it will start to become more relevant here. Does the term greatest refer to the most powerful such as who would win in a fight counting Haki abilities and such or who has the most skill in a true blade battle?

If it’s the former then Shanks will likely carry this title. The man has done little to nothing in the 1000+ chapters of One Piece but at the same time he is a Yonkou. Moreover, he is the only one not to fight yet and by Shonen Jump/Any media standard that implies that he will end up being the strongest. Although Oda has put himself in a very sticky situation here because if Shanks actually does lose his first ever fight off screen to Blackbeard as many suspect, that would be a truly awful payoff to everyone who was looking forward to him getting some action.

So from a feats standpoint Shanks is lacking but in a lore sense the odds of him being more powerful than Mihawk is quite considerable. Just consider the parallel between Zoro and Mihawk vs Luffy and Shanks. It would make sense that the latter combo is stronger than the former even if Mihawk will be more skilled than Shanks.

Then we cut (See what I did there?? Heh) to Zoro. Well, it’s clear that Zoro was a lot weaker than Mihawk pre time skip and then had to get trained by the main for almost 3 years. At this point we can say that Zoro was still weaker. After that though, Zoro got the legendary Enma, the ability to cut through fire, and improved enough to block a combined Yonkou attack. Zoro also awakened the Conqueror’s Haki which is something we don’t even know if Mihawk has. Most likely he will end up having it since he may become irrelevant in the fights otherwise but these are a lot of of points in Zoro’s favor.

Right now I would have to put Zoro ahead of Mihawk both in skill and power. There’s certainly a decent chance that Mihawk can prove me wrong since in a lore perspective it would make sense for him to be incredibly strong like Shanks but until we see it, I can’t give him the title.

So there we go, if we’re talking about lore or pure ability then Shanks is the most powerful swordsman in the world. If we are talking about feats or overall skill with a blade then Zoro takes this. Either way I’m afraid that Mihawk will need to relinquish his title effective immediately. He cannot be considered the world’s strongest swordsman. Not right now. If you have any doubts at all after reading this, just check out this final clip of his reaction to Shanks entering the battlefield at Marineford.