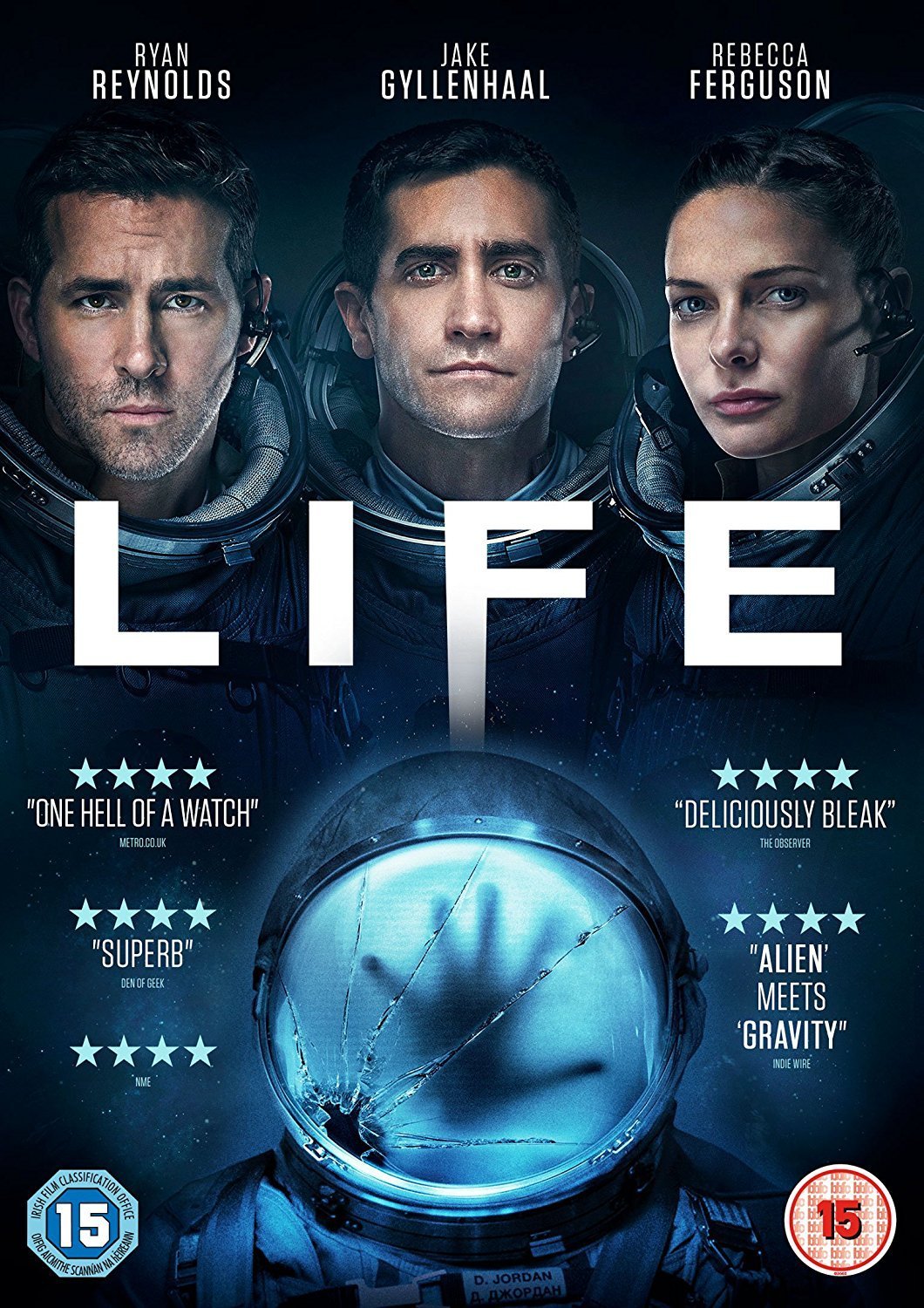 Life is one of those films that plays out pretty much as you would expect. The main characters are considerably out of their league when they venture into outer space. Now, it may not be because of aliens, but I certainly wouldn’t want to go into space myself. It looks really constricting and of course you can’t just head home if you don’t like the experience. You’re stuck up there for a very long amount of time. Maybe at best you can ask everyone to put you back in stasis or something.

So the movie picks up with a group of scientists aboard a spaceship picking up what could be the first sign of life outside of Earth. It looks a bit like an amoeba but one that is quickly growing. Derry is thrilled and gets a little too obsessed with his research to the point where he starts disregarding safety protocols. Unfortunately this allows the alien known as Calvin to escape his cage and begin his massacre of the crew. Can they band together to stop him or will they ultimately be crushed?

Yeah so this is basically Alien only instead of fighting a powerful Xenomorph the heroes are battling with an Amoeba that gradually grows. The more Calvin grows, the more he begins to look like one of those mini Clover monsters from Cloverfield. The design for his final form actually isn’t bad. Sure, it’s not as threatening as the Xenomorph or anything like that but it does have a scary looking face.

Additionally, the fact that it can change shapes and move so fast makes it potentially more dangerous than a Xenomorph. At least with the Xeno you will die instantly when it tears through you while this monster tends to take its time with the prey and drag everything out. Yet another reason why you don’t want to be enemies with this guy since it definitely won’t be ending very well.

The crew are okay at best. First you have Derry who is very annoying. We have safety precautions for a reason and the instant he threw them away that was it. Additionally, even after Calvin has murdered at least 2 people you still have this guy saying how this could be a learning experience and everything. Really? That time has long since passed if you ask me.

Adams was the best member of the crew but unfortunately, he doesn’t last very long. At least he was trying to go on the attack, Calvin was just too fierce. For his bravery, Adams’ only reward is the most painful death in the film. Certainly not the way that you would want to go out and it’s always a disturbing way to die with the villain basically going inside of you.

Then there is Golovkina who also goes out in a super rough way. She had to make a tough call at the end and even if it didn’t work out, you can see why she made that decision. Bringing Calvin anywhere is a super big risk so at least in the vacuum of space you figure it wouldn’t be too bad. Calvin’s just too fast for any of that.
In any horror/survival film there has to be one character who just cracks under pressure. It’s a cinematic necessity and that’s Murakami’s role in this one. He splits from the rest of the crew to go to the life pod and as a result doesn’t really know what is going on until it’s too late. It’s too bad because he did all right for a while but couldn’t stick the landing.

Jordan is someone who really prefers being in space than on Earth. It’s an interesting character trait and one that you can understand. Again, I’m not a space guy but I can see why you’d want a break from all the fighting and war on Earth. Then you have North who came up with a lot of the safety protocols so it’s probably annoying for her to see how they aren’t quite working this time.

The effects aren’t bad. There’s just not a whole lot you can show in space so prepare to feel confined without a lot of cool backdrops or anything like that. Space scenes can also be rather slow since it’s hard to maneuver out there. Ultimately it’s just that the space setting isn’t very solid to me but it does what it can I suppose. Where the film really ends up shooting itself in the foot is with how gruesome it makes all of the deaths. You’d almost rather this was just a normal Xenomorph biting everyone.

This monster effectively drains your life force and explodes you from the inside out. Mix in the space effect where everything floats and you can see how the film gets a little creative there. They also manage to squeeze in some animal violence since of course there is also a mouse on board and Calvin can’t have any of that. There’s no reason that the mouse should have been here. The instant he appeared I knew that the little thing was doomed and that’s just not right. I wanted him to have a good time and hopefully get out of there in one piece. That would have been ideal but it was never a real possibility.

The ending was effective though as the kind of horror twist you’re always expecting. It plays out a little differently than I had guessed but certainly hits with the same intensity. The heroes underestimated Calvin one last time. It would lead into a sequel quite well as we get the government involved. I’m thinking the sequel would beat the original because Earth makes for a much more interesting setting. Alas, sequel are never guaranteed so we’ll see if that ever happens.

Overall, Life doesn’t add anything new to the equation. The setting limits how much fun it can really bring to the table and the movie focuses too much on how brutally Calvin can murder the crew instead of making this more of a slow burner thriller. Alien had better designs and ship layout even though it came out so long ago. The idea of finding aliens in space is always interesting and you should be engaged for a while but you can’t help but feel that the film left a lot on the table. There is so much more you can do with this concept without having to make it so brutal. Ultimately this is one that you should skip.