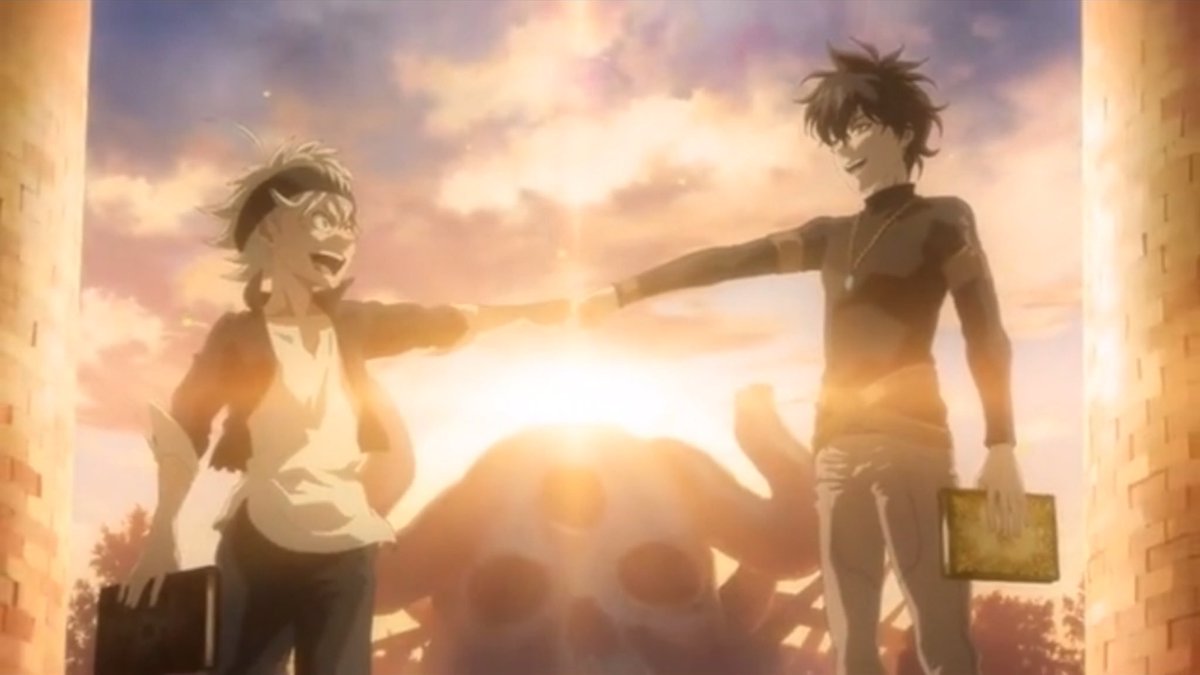 Notice that I’m using the term “healthiest” here as opposed to greatest. It’s a little nuance that is worth pointing out because it’s different. The greatest rivalry would definitely need to be Goku and Vegeta followed by Yugi and Kaiba, Tyson and Kai, Aichi and Kai, Naruto and Sasuke, Yusuke and Hiei, etc. I would put those rivalries higher than Asta and Yuno’s if I were to rank them all.

However, while those rivalries are a lot of fun, part of the intensity there is with how toxic and antagonistic the characters were for a time. Vegeta literally started out as a genocidal monster who would blow up monsters and torture his opponents. He’s tried to murder Goku on more than one occasion and hasn’t always stayed the path of a hero. The banter is top tier but you couldn’t always say the rivalry was on good terms. (Well, Goku would probably say it was positive throughout) It’s a great rivalry but I wouldn’t call it a healthy one in the sense that you wouldn’t want this rivalry in real life prior to when it finally mellows out more in the end of Z to Super era.

Meanwhile Asta and Yuno is the kind of rivalry that you would absolutely love to have in real life. Both of them clearly respect each other and encourage themselves to do better. When Asta was having a hard time, Yuno gave him a pep talk. When Yuno was mind controlled Asta talked him back up. You never see these two characters getting really jealous of each other to the point of turning evil or giving each other the cold shoulder.

There were several times it seemed like the manga may be about to turn Yuno over to the dark side but it hasn’t happened. Now it still could at some point but we’re fairly deep into the series without that happening so the chances continue to decrease. He just takes his losses as an opportunity to get stronger without resenting Asta for it. They may get jealous at times but nothing very serious. One such moment is when Asta’s chances of fighting Yuno are sabotaged and he’s upset since now Yuno is in the finals but Asta won’t get to be there. It makes sense as being a very frustrating moment though because that’s something he had been looking forward to for a very long time. So let’s specifically look at the reasons why I call it a great rivalry.

The origin of the rivalry 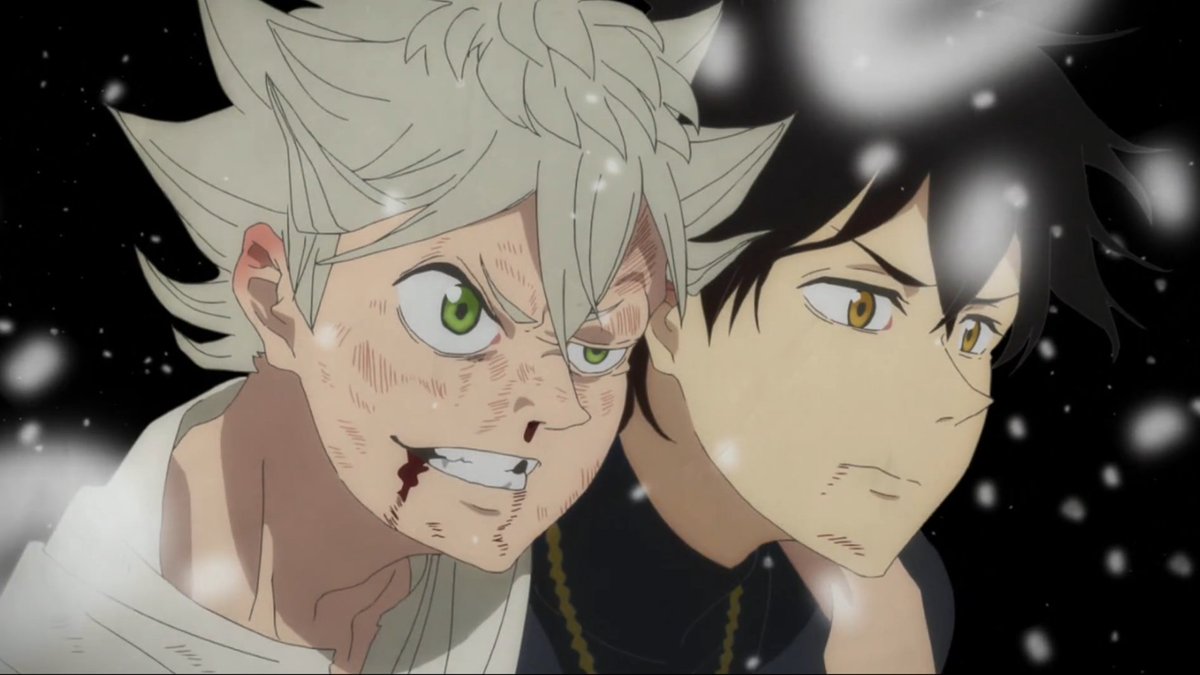 So rivalries can start in a lot of different ways. It could be due to an inferiority complex from the rival himself who sees that he will ultimately be surpassed by the lead as with Bakugo. Deku just rubbed him the wrong way and the guy never looked back. He went after Deku at every turn but make no mistake he was a bully through be through. For Asta and Yuno, they became rivals after Asta saved Yuno from a bandit. Yuno saw Asta’s power and vowed to be strong. Not to rub it in Asta’s face or to destroy him but because that was a new ideal for him. From that point on Yuno was a changed man and never cried like that again. It was a positive start though as Yuno saw Asta at his best and it helped him improve himself. It’s a rivalry based on making each other better as opposed to breaking each other down and that’s a common theme throughout the series.

A lot of rivals can barely manage to acknowledge each other without throwing in some kind of insult. You’ll come to see that a lot especially with Sasuke as he continually badmouths Naruto. He is definitely an extreme rival given how he completely turned evil and all but it does show how far some rivals are willing to go. Compare that to Asta who is able to awaken Yuno from the mind control by talking about his dreams or Yuno saying that he knew Asta would he selected by the magic knights and get a book. A proper rivalry should be one where you acknowledge the other side as an equal and that’s exactly what they did. Not just in a power sense but even just acknowledging that they respect each other.

Asta and Yuno always do that and even in front of villains so it’s not like this is a private thing. They don’t care who’s listening and will still praise the other. Particularly in Yuno’s case this is a big deal since in the series there is a big stigma against those who cannot use magic like Asta. This can also mean that Asta is susceptible to surprise attacks since his durability is that of a normal human’s. Once Asta learns how to use ki it becomes difficult to launch a sneak attack on him but there’s one time prior to that where a villain tries to land a sneak attack and Yuno quickly foils the attempt. It was a good way to show how they still watch each other’s back. The clip I linked above showed Asta at his lowest moment in the series and Yuno was able to bring him out of that depression. There were no insults, barbs, or any of that. Yuno just talked him up and it was a powerful moment.

Finally, it’s a rivalry not an obsession

When there’s an actual villain to defeat you don’t see any kind of bickering between them. There’s no pretense about being the one to stop the villains or anything like that. They just run in and get the job done. They’ll team up and coordinate attacks in an instant without looking back. They did this to fight Licht, the Devils, Mars, etc. their rivalry takes a backseat to the actual threats which is very realistic and just makes sense. They are heroes first and rivals second after all.

Personally I love the kind of banter we get from say Goku and Vegeta when a villain shows up. In their case the rivalry takes first dibs mainly thanks to Vegeta insisting on it. It’s a lot of fun to watch of course which is why they have the best rivalry of all time but in real life you’re probably hoping you can get help from your rival if something serious happens. Make no mistake Asta and Yuno still have a lot of great banter throughout the series and take shots at each other but it’s all in good fun. You never feel any kind of malice between the characters, serious resentment or anything like that. They’re just good friends who make each other even better.

So those are the main reasons why I put Asta and Yuno at the top in this category. It’s a really nice change of pace and it also makes this a very unique rivalry. As mentioned there is still time for things to change though. I’ve always been in the camp that believes Yuno will probably turn evil at some point but I wouldn’t mind being incorrect on this one. I should also say this isn’t the only healthy rivalry. There are certainly more of them out there particularly if you go more into different demographics. For Shonen the closest might be fighters like Ichigo and Renji or Luffy and Zoro but both rivalries are less of a focus to the point where you can debate if they really are rivalries. Then you have Ash and Gary where there are a lot of insults from Gary but I would put it more on the good fun side. It might be straddling the line just a tad but I have no doubt that if Ash was in serious trouble Gary would step in without letting Ash get beat up. Still, those are all runner ups in the end. Asta & Yuno’s rivalry is unmatched.