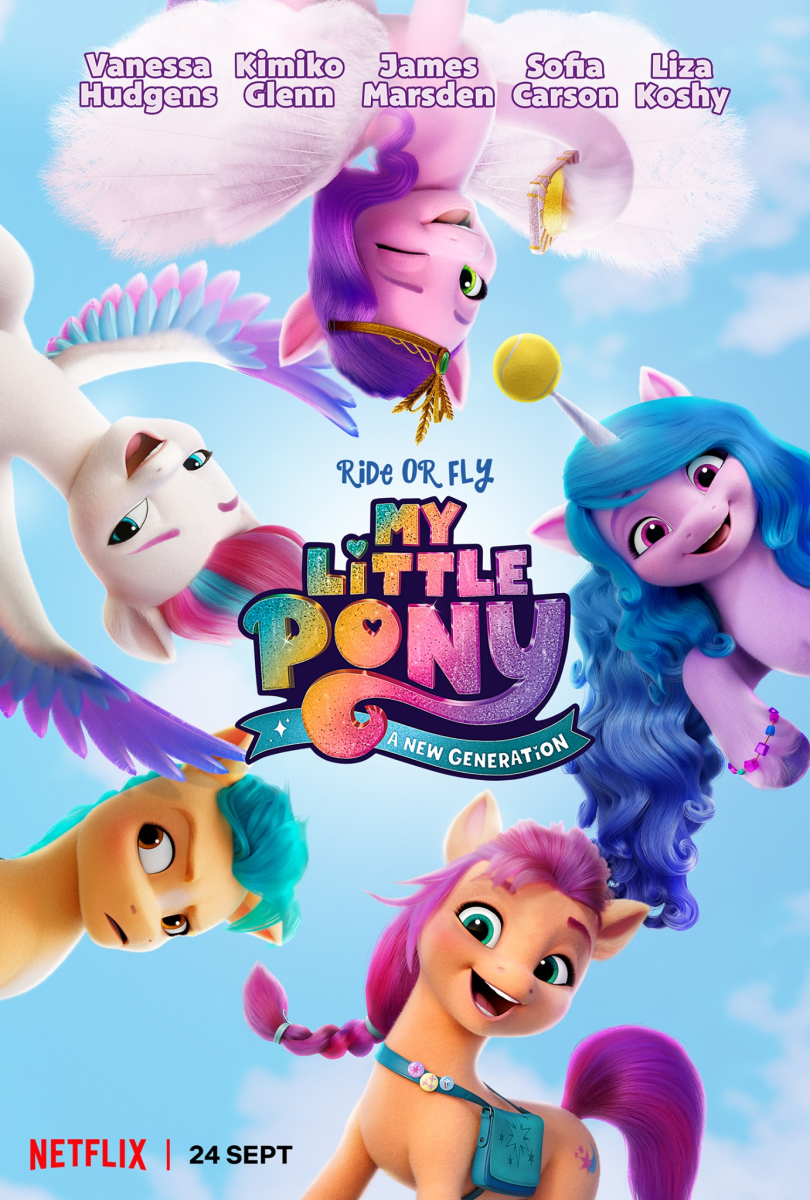 It’s time for the next generation of My Little Pony. Friendship is Magic certainly took the world by storm with how big it got and had a huge cast by the end of it. Leaving an old continuity for a new one is always a tricky thing. Technically they may exist here or they may not, it’s hard to say. I’ll assume they do and that the toys are based on their legends so they can hopefully appear in the show at some point. The movie does a good job of just creating a satisfying experience without having to rely on the old cast though which is impressive.

The movie starts out with a fake-out moment of the Mane 6 banding together for a big battle. That seemed like it was about to get really hype but it turns out that this was just the main characters playing with toys. Sunny has always believed that every Pony should be friends but her friends remind her that all ponies are against each other. The Earth Ponies, Unicorns, and Pegasi are all enemies now and that can never be changed. We jump forward many years and see that Sunny has not given up her dreams of unity. She crashes parties and does her best to always barge in and remind people of this.

Well, one day a Unicorn named Izzy shows up and Sunny helps her escape from the vengeful village ponies. It turns out that the Unicorns have lost their powers and the same is true of the Pegasi. Each group thinks the other did this and so there might be a grand conspiracy here. The heroes will have to find the lost crystals to form the crown of power that will give everyone their powers back. It’s the only chance left for the ponies to finally come together. Can Sunny and Izzy pull this off before Sheriff Hitch captures them?

A New Generation really flows by so the movie did a good job on the pacing. It’s really a very low key adventure but one that will keep your attention throughout. Don’t expect big fight scenes or a whole lot of danger. For around 90% of the film it’s not like anybody’s lives are in danger and even in the climax you just have a main villain who is a comic relief character so there’s no danger there either. This is just an adventure to find the crystals and reunite the world. For such a movie you need to have quality characters and writing, both things that this title has.

The characters certainly won’t beat the Mane 6 but they put in a good effort. First you have Sunny who is a solid main character. She’s very earnest and talks tough to anyone who opposes her. Her confidence may surpass her actual skills at times but I always say you have to talk a game so even if she can’t back it up, I appreciate the effort. With the whole village against Sunny her whole life, she did a good job of not bending to them either.

Then you have Izzy who is more on the ditzy side and doesn’t really understand any kind of phrase that isn’t super literal. That’s not my favorite character trait so some of her scenes don’t land but she’s a nice enough pony and is always around to help defend Sunny. The two of them have a lot of good banter which is important since even though the film ends with having a Mane 5, most of the film is really these two as a tag team.

Hitch is the Sheriff who is after the main characters and he is actually good at his job. For a while there I was expecting him to be outsmarted and wrecked at every turn but surprisingly he gives the main heroines a run for their money which is good. If Friendship is Magic had one weakness, it’s that there were no real solid male heroes. Hitch already beats all of the ones before him. Yeah Hitch is ultimately on the wrong side for most of the film but he’s a lot more reasonable than the other villains and actually thinks he is doing the right thing. He comes around quickly enough when they point this out to him.

Then you have Pipp who joins up with the crew later on. Her role isn’t as big as the others but she helps out quite a bit and will certainly be the Rarity of the group. Pipp likes to be trendy and on top of things which is important for a princess in her position. She may not be thrilled with the plan and destroying the status quo but she helps out. Finally you have Zipp who is the rebel of the group. Zipp’s got a lot of courage and just does whatever she wants when she wants.

She doesn’t get to show off her confidence as much as I would have liked since she appears rather deep into the film but I’d expect big things of her going forward. That’s it for the main heroes but quick shoutout to the Queen for staying strong under pressure. She doesn’t sell out the two princesses even after being captures. She handles herself with dignity as befitting a royal. There’s a bit of a missed opportunity with her not being Rarity though. After seeing the trailer I was 100% certain that this character was Rarity. It was certainly a twist seeing that this was not the case.

Now for the two villains, we’ve got Phyllis and Sprout. Phyllis is the instigator who keeps on pushing Sprout to get more and more villainous until she starts thinking that things have gone too far. That’s always an annoying trait for a villain though because it’s hard to feel sympathetic when they’ve already gone so far. It’s not like anyone’s died here or anything but it still feels really quick for her to change sides.

As for Sprout, I couldn’t take him seriously. The film goes out of its way to make him a complete comic relief character to the point where even when he gets a giant robot the guy is messing up. You can’t have someone be the main comic relief and then try to spin it like he’s an intimidating villain. That just doesn’t work. I also felt like his descent into madness was way too quick as well. This is really the film’s biggest weakness, the villains. Both villains just aren’t all that good and the plots are taken to the extreme.

For example Sprout gets his own villain song but instead of being rather great like the last MLP film, this one is too on the nose. You have the villains singing about how they’re irrational and confused the whole time. Why would they be singing a song where the lyrics are bashing them the entire time? It’s like the film wanted to make crystal clear that these are the villains but it was already obvious so they definitely went too far on this one.

The songs are okay otherwise but still below the average MLP song. The rap song was rather underwhelming as well so the best ones would be the first song and the one near the middle. The song in the credits are good too. There are enough songs where you are sure to find ones that you like but I don’t recall the last MLP film having any bad songs so this one definitely loses out in that respect.

As for the graphics, I’d say that the CGI looks good. It’s certainly not nearly as colorful or as energetic as the FIM TV show, but it works well enough I suppose. I don’t think CGI will ever get to the point where it will be the preferred choice but as long as it’s not low budget it will do the job. We don’t get to test how it would look in a fight scene either since there aren’t any of those this time.

As a side note, if Friendship is Magic did take place in this film then the Mane 6 officially did a bad job of restoring the peace. Letting everything get shattered like this does not speak well for the whole friendship setup that they left the world with. Now the question you’re wondering is how do the Main 5 stand up to the Mane 6? Well, lets break it down with each character and their rival.

Twilight Sparkle beats Sunny. I’d say that one’s pretty clear as while I like Sunny quite a bit, Twilight’s proven herself much more. Any good trait Sunny has, Sparkle has as well.

Pipp beats Rarity. This one’s not too hard, while Rarity was a very fun pony, I do think Pipp’s already a much more balanced Pony. She likes being trendy but puts her friends first and isn’t too obsessive the way Rarity was.

Rainbow Dash beats Zipp. Zipp didn’t get much to do yet and it’ll be difficult to surpass Dash who has had such great moments over the years. I would argue that Dash is much braver as well.

Izzy beats Pinkie Pie. Well that’s a rather easy pick. Pinkie Pie was my least favorite member of the Mane 6 at times and her crazy antics weren’t always entertaining. The same is true for Izzy but she doesn’t let herself get as wild as Pinkie.

So that leaves us with two members of the Mane 6 left with Applejack and Fluttershy vs Hitch from the new generation. Fluttershy doesn’t really have a counterpart so I would say this is Applejack vs Hitch. It’s a tough one but Applejack ends up winning this contest. Both Hitch and her are tough ponies but Applejack had her fun rivalry with Rainbow Dash and I also don’t see her threatening to withhold her friendship the way Hitch did.

Final Score: Friendship is Magic 3: New Generation: 2. FIM wins this in the main character battles but it’s close enough where it’ll be fun to see how the new generation continues. If they get a 6th member this could reasonably be 3 on 3 at any time. Now I don’t think New Generation will ever beat Friendship is Magic since it’ll be difficult to replicate the danger and fight scenes that the old series had but hopefully it’s close because that’ll mean that this show did a good job.

Overall, My Little Pony: A New Generation is a fun film. The dialogue is on point and the writing is good for everyone aside from the villains. It’s not a very long movie and it’s one that will feel even shorter because something is always happening. Each landmark gives you some kind of fun adventure and each Pony gets to use their skills to succeed. I was pleasantly surprised with Hitch looking good as well since I thought the film was going to make him look really incompetent. By the end we’ve got our Main 5 now and we’ll see if this ends up being the definitive MLP generation by the end.

2 thoughts on “My Little Pony: A New Generation Review”