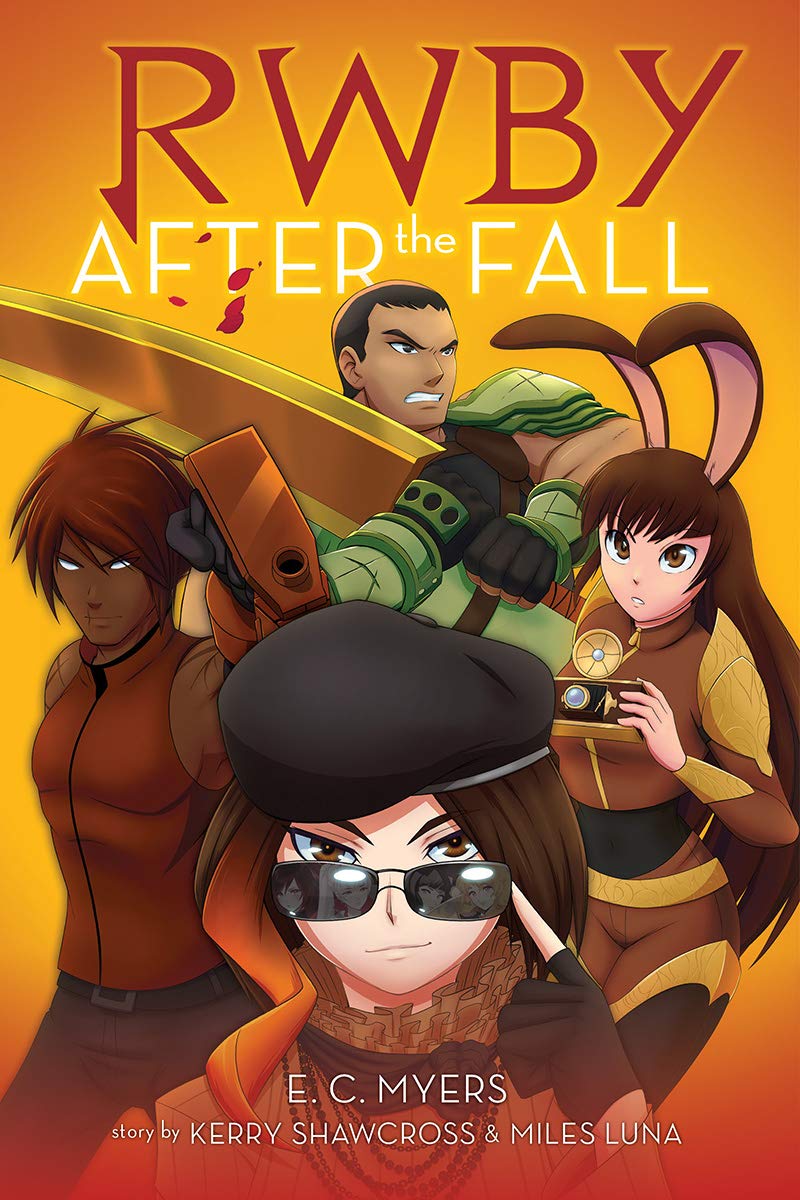 I rented this book many months ago but it was hard to find the time to check it out. Well, I finally got to red the book and it’s always nice to have some more RWBY adventures. I’m personally not a big fan of Team CFVY, never have been since they got humiliated over in the tournament but I suppose this was the chance to explore their characters. They get a lot of development and we also get to see more of their abilities this time but I’m still not sold on any of the characters. I don’t think they’re ready to contend with the kind of threats that team RWBY goes after.

The main plot has the team heading over to the Vacquo desert after receiving a distress call. They save an old lady named Slate from a monster and then head into the village. The issue is that the Grimm keep on attacking the settlements. Peoples emotions are also going crazy for some reason and these events have been attributed to “Mood Bombs” The heroes have to figure out what is causing this to occur while also staying unified as a solid group. One of the more difficult aspects of this is that their teamwork has never been the greatest before now. Throw in their tempers and the mission will get a lot more dangerous.

Vacquo is a region that hasn’t gotten to appear much in the main series so this was also a chance for the book to flesh it out a bit. It’s also fitting because the next RWBY volume may be taking place there so the book is like a preview. We already know some of the lore like how most people don’t want to live here and everyone ends up being a loner but it’s good to see this place first hand. In the book we clearly see how the desert is super dangerous since there’s nowhere to hide when a Grimm inevitably shows up. Even without the mood bombs going off, you know that Grimm will eventually appear.

Between chapters the book will also give you some flashbacks for the characters. We see their point of view when they met up with the main cast in volume 2, their point of view during initiation from a year before volume 1, Velvet and Blake have a conversation on why Velvet’s always getting bullied, etc. They even helped out with the dance festival a bit. While you may just be waiting to get back to the main plot sometimes, it was nice seeing the familiar faces like Ruby and friends in the flashback so that part was nice.

The book’s a pretty decent length at close to 300 pages so there’s a lot that goes on here. There are quite a few new characters as well and the plot has a good amount of twists and turns. How good it is will depend on if you’re able to follow this team for a while. While I’m not the biggest fan, they did hold the book up well enough. We also get some quality fight scenes so that’s always fun.

As the leader a lot of responsibility is put onto Coco at all times which is part of the tension here. The other members aren’t always crazy about Coco giving out the shots and they aren’t afraid to say so. It’s also fair to say that she probably isn’t even the strongest member of the 4. I think that would have to go to Yatsuhashi. The others do need to realize that Coco was the best bet though as none of them would really fit in the leader role. Coco certainly makes her share of mistakes as things go on but all in all she tries her best and that’s what counts. Coco’s still learning and should get better as her adventures continue.

Then we have Velvet who is the nice member of the group but I’ve definitely got some more issues with her. Now, I cut everyone some slack on account of the mood bombs with how they attack each other but my issue with Velvet is that she’s too passive. For example, she actively allows herself to be bullied while at the school. Keep in mind that she could quite easily beat up just about any of the students who mess with her. We get a flashback where Blake has to step in and save Velvet, then Velvet still defends her inaction. She tries to say that it’s just easier to allow herself to be bullied so the bullies won’t go after anyone else. She also hopes to stop violence with peace.

Perhaps these are nice sentiments but it’s not the right way to go. Now, to an extent I think this is the novel trying to explain away the really early scene in the show where we see Velvet being bullied by the weak students at the class. I suspect this was before she was planned to be one of the year 2 powerhouses. So this is sort of an excuse for that scene but I would have just not acknowledged it. It exists though and the book double downs on it so Velvet ends up being the biggest pushover in the series. That’s not the kind of character I can get behind. Velvet really needs to toughen up and soon.

Then we have Fox and I didn’t even realize he was blind in the show. His role was extremely small though so I think that’s a fair reason for not noticing. The show delves into how tough it is to fight while blind and how he gets around it. His ability to use telepathy is certainly handy and by the end I would say he was the best character. He has a lot of witty dialogue and isn’t afraid to call the other characters out. By sensing his opponent’s position, he can get past his weakness of not being able to see. You feel like he had to put in a ton of work to get to where he is so that’s impressive.

Finally you have Yatsyhashi and his memory alteration ability. More specifically, he can cause you to forget things. It’s definitely a power that you have to use carefully as it can easily be something that villains end up using at will. His origin story is delved into here and we see that he did make a big mistake with it once. Now he is really cautious about using the power at all. Fortunately he is quite powerful even without that semblance so he is still able to protect his friends. He is also able to block the mood bomb far better than any of the other characters since he controls his emotions well.

So the characters have their moments and the only one I have significant issues with is Velvet. The other characters are decent but I just don’t find them too interesting even after reading the book. They get to clown on both Weiss and Ruby in the flashbacks to show why this team is so much better but of course I wasn’t buying that. If it was a fight then things would go pretty differently. Maybe they can finally get a role in the next show volume. Since these 4 are attending Shade Academy, you’d expect them to appear at least.

As for the antagonists, Bertilak and Carmine were both solid. They appear as corrupt Huntsman/Huntress at first and then continue to go downhill from there in terms of how they’re not exactly heroes. They have a bit of a good cop and bad cop routine going. Bertilak doesn’t give the main characters any respect and is always badmouthing them. Meanwhile you have Carmine who talks and acts really nice to the heroes but is still hanging out with Bertilak and not exactly going against him so….you have to keep that in mind. I imagine it is a tough situation for her as well but she could do more.

I did like these two characters though. Bertilak’s a tough fighter and he does have a lot of confidence in himself. It’s easy to see how he has survived so long in the world of Remnant. His fire semblance is also very handy in a fight. Carmine was good as well. Even if her pleasantness may not be genuine, she at least knows how to connect with the characters and get them to lower their guards. Her ability is also solid involving the wind. It’s hard to say what her semblance was exactly from the fight but it was definitely useful and a threat to the others right from the jump.

For the settlement characters there were 3 main ones. Slate was the unofficial leader and while she may be old, she does a good job of leading the troops and keeping morale high. That in itself is always a good trait for a leader. She was decent enough. Then there’s the old man Edward who used to be a tough fighter back in his day but he’s old now and his mind is slowly leaving him. This does make the situation rather difficult as he’ll randomly start walking away or zoning out. It’s certainly really frightening for his grandson Gus who isn’t sure how to really handle this. I wasn’t really a fan of both characters even if there’s not a whole lot they could have done to make things better. I do think their plan was not very good from the start though.

As a final note, we got to see Ozpin being shady as always. Calling in Velvet alone right after a heartbreaking mission where everyone died seemed rather harsh. This way she had nobody to rely on. Of course his reasoning was that he could definitely get an accurate story this time with no interference but the timing was rather abrupt. You also feel like Coco should have been called in as the leader instead. I was glad when the rest of the team burst in to protest against this.

Overall, After the Fall is a pretty good book. Alternating between flashbacks and the main story was a good way to give the characters a lot of development while also providing us with some action and real stakes in the present. Even if I would rather be reading about Ruby and friends, I understand the reasoning behind using these characters instead since it could be a very long time before they get the spotlight in the show if that ever even happens in the future. For all we know there just won’t be any time for that but I am hoping they could return for a fight. If you’ve only watched the show then their team has never beaten a real (Non-Grimm) opponent in the series which is unfortunate since they’re supposed to be one of the top teams around. I’ll definitely be reading the next book sooner than later.