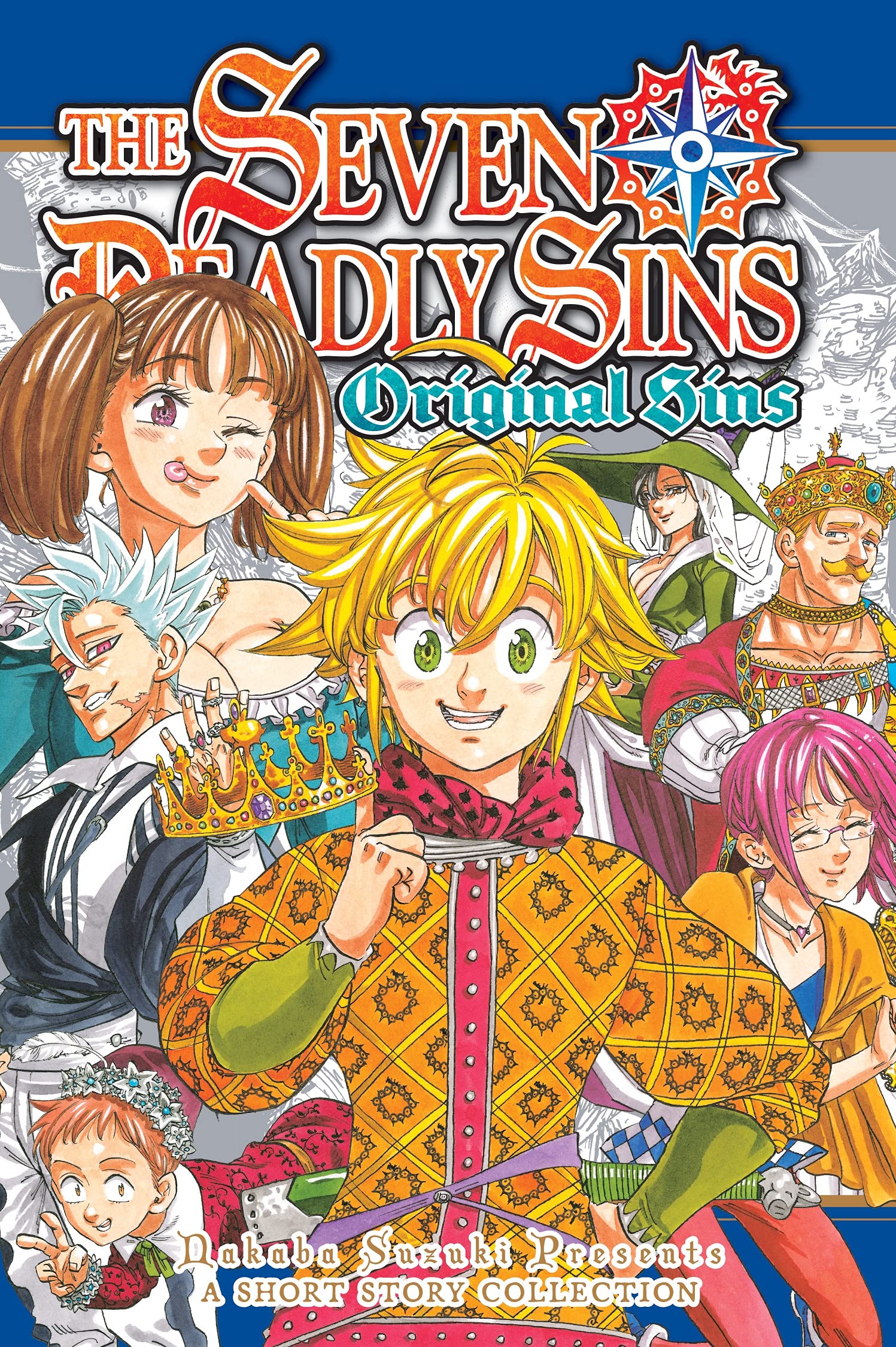 As you probably know, I was not the biggest fan of the Seven Deadly Sins main series. Much like Fairy Tail, it could have been one of the all time elites but was held back by fanservice issues and a really poor main character in Meliodas. Still, with the concept being good, that always means that the spinoffs have a lot of potential since you can possibly get all of the highs without the lows if the stories end quickly enough. I would say this spinoff does a good job of that. It’s not amazing or anything like that but it’s a pretty good collection of stories where the Sins get to do their thing and take out the enemies.

The main story in this book sees Meliodas and the crew take on the vampires. This story is from before they disbanded so it’s fun to see the team together from back in the day. Even at this point they were all incredibly powerful and I think you could do a whole prequel that would be a lot of fun about this era. There isn’t a lot of danger as the heroes completely outrank the villains in every possible way but at least we get to see them all use their signature techniques.

From the vampires the only real notable one is Gelda as she would later go on to have a big role in the climax of the series. She’s certainly smarter than the average vampire and quickly knew the score and exactly how everything would play out right from the beginning. Her request to be destroyed by Meliodas still isn’t the right move here though even if winning would have been impossible. At this point she had no true allies or reasons to keep on going but she could have found some if she stuck around. It all ultimately ended up working out for her but if you read this story before reading the main series then she will come off as being someone who gives up way too quickly.

The strongest vampire was probably the leader who fought Escanor but even then you knew that he was doomed from the start. The art is great as always though so you can really appreciate the villain designs here. They just emit power in every panel. Likewise the heroes all look powerful here and you can see why they are known as the ultimate fighting force in the kingdom. It’s rare to have a hero group who completely outshine the villains like this but that’s just how good they are. It would be difficult for any group of villains to match them. The fights are solid so that’s why the vampire story is very good.

Then there’s a very short story where a few bandits decide to break into the cafe Meliodas owns to harass Elizabeth. Fortunately the rest of the Sins show up and beat up/intimidate those bandits for a while. The group’s always ready to watch out for her that’s for sure. While the story may make it seem like they arrived by accident, you get the feeling they’re all always on the lookout so as soon as the bandits showed up they knew what to do. This was before the popularity poll results in the volume so it was a good way to give everyone a moment to shine first.

Finally we have the pilot to the Seven Deadly Sins series. It’s always interesting to read the pilot to see how things changed from the original oneshot. For starters, Meliodas actually seems like a decent person here. He has a huge sword as well instead of the hilt that’s missing a blade. The plot itself is the same as Elizabeth shows up to try and locate the Seven Deadly Sins to help her retake the kingdom but they are all scattered to the winds. Her personality is very different though as she doesn’t really have any manners here and is super oblivious to all social rules.

In this case, her being a princess means that she doesn’t have much common sense and doesn’t know basic tasks. Unfortunately this is an excuse for some fanservice. The villain here is a little more deranged and one of those pervy type villains who is extremely annoying so the main series definitely had a better introduction when it comes to the villain. Both the original first chapter and pilot have different positives and negatives so in a way the series just changed up what held it back. It’s a decent pilot but it’s easy to see how this could have taken us down the wrong path.

The artwork has certainly improved from then though. You can’t really compare the character designs from the pilot to the main series, it’s just a world of difference and that makes sense since the artist is a lot more experienced now. With these 3 stories in here, this makes for a fun one shot. It’s always good to see the gang again and I’m glad these stories were put into a manga volume instead of staying in limbo for all eternity. This is certainly the better deal.

The Seven Deadly Sins may not be the best group of heroes out there as I’m not a huge fan of most of their members but it is a nice dynamic with how they’re barely a team. They don’t work very well together to the point where it’s extremely rare to see them all teaming up at the same time. They’re all just too strong so naturally they all have big egos and rivalries of their own. Merlin and Gowther always seem super suspicious so it’s hard to know what they’re thinking. King and Ban are always fighting, same with Ban and Meliodas. Escanor’s personality does a 180 based on whether it’s night or day and Diane is nice enough. Their chemistry makes for a lot of fun banter but usually won’t turn into teamwork. They’re so strong that it’s rarely needed though.

From the 3 stories my favorite one was the vampire story for the reasons listed above. It’s just a very classic action story and seems like the kind of plot you could expect to see in a movie. Second would be the short story about the Sins beating up the random bandits. It was really short but it was nice to see everyone defending Elizabeth there. Finally the pilot would be in last. Still a decent story but between the villain being pretty bad and Elizabeth not being at the top of her game it just couldn’t compete with the others. 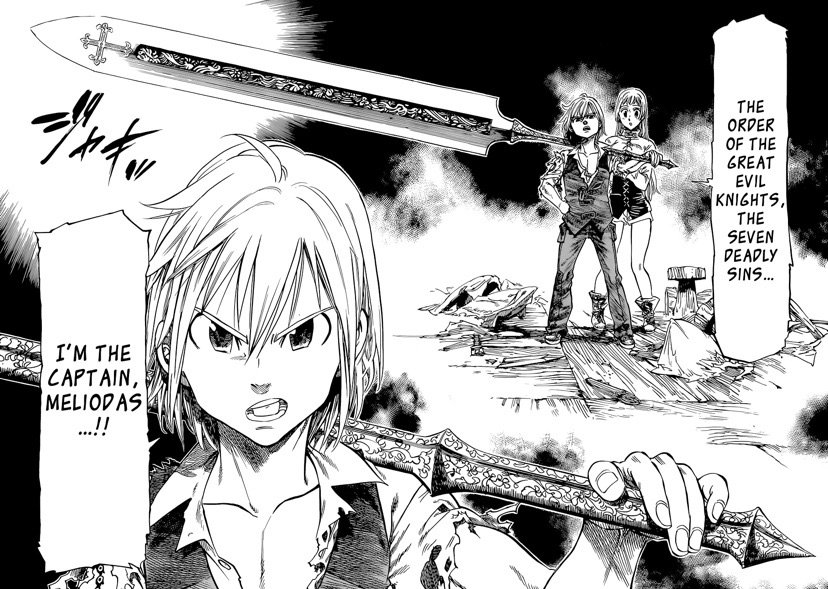 Overall, Original Sins is a clever title for having the original story in here but at the same time it makes you think that this might be more of a full prequel instead. I still say that a story about their original adventures in full would be a lot of fun. If you’re a fan of the main series then you’ll definitely want to check this one out. If anything you may enjoy checking this one out if you haven’t read the original as well as it’s a decent jumping on point. The vampire story at the beginning tells you all of the character personalities and abilities while the pilot gives you a good idea of the story. So that way you’ll have a good idea on if you will like the series or not.