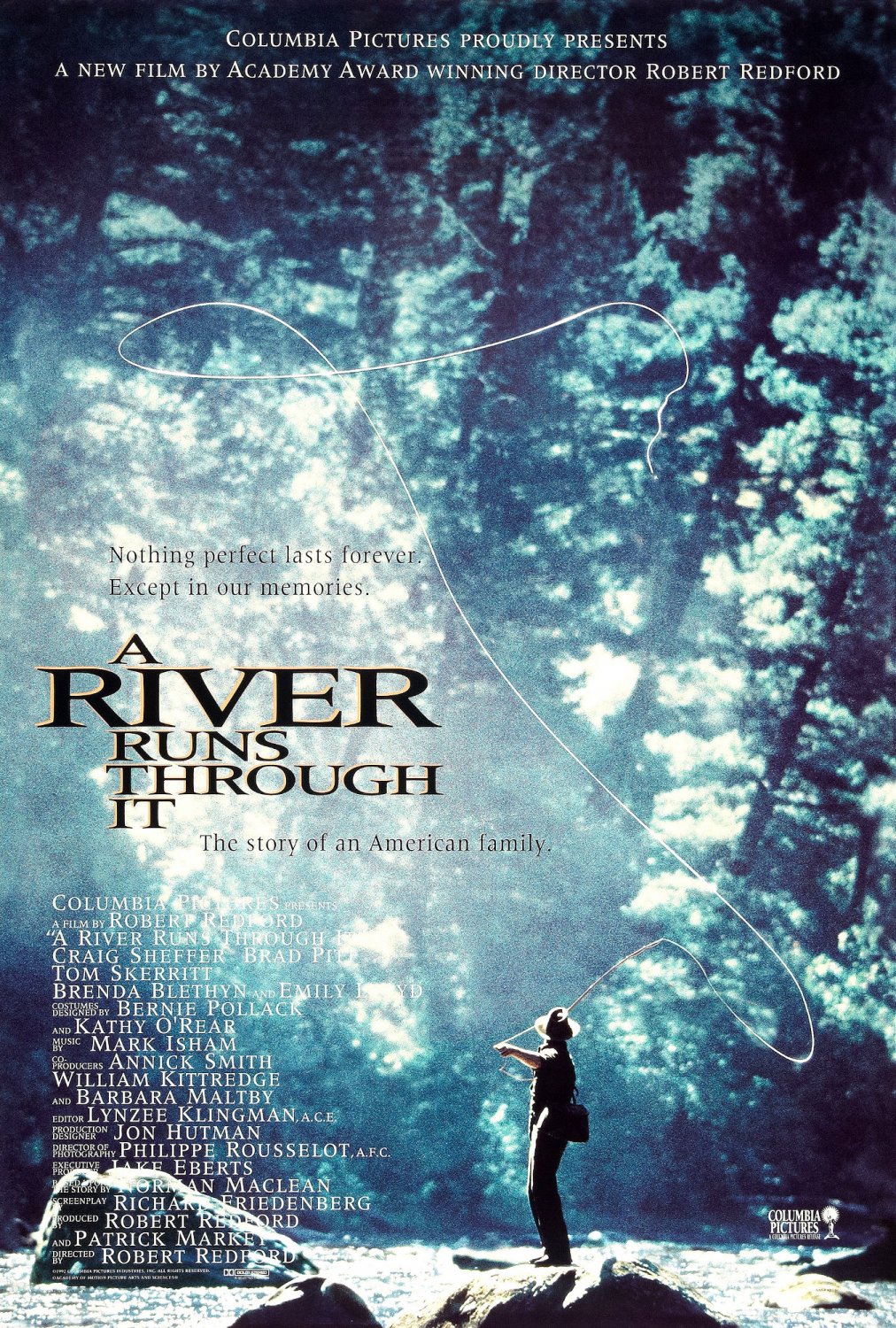 A River Runs Through It is a fairly peaceful film. For the most part I’d call it a slice of life about the characters learning just how great fishing is. The narration really lays it on about how great fly fishing is in particular and it’s an activity that really keeps the family together. It’s a fun adventure and while it’s one that may not be too eventful for the most part so there won’t be a lot of replay value, I wouldn’t say it had many issues either. The story will keep you interested all the way through.

The film starts off with Norman and his brother Paul as kids who grew up in a rather small town where everyone knew everybody. Their father John was the local paster and as a result they tended to get into a lot of mischief. Paul was usually the instigator here but Norman would always have his back and they would just hang out. At the end of the day they would all go fly fishing and just enjoy the great outdoors. As time passed by, the two brothers got older and had less time to hang out as Norman went abroad to study and Paul joined the newspaper business but they would ultimately still keep on fishing together.

The movie takes place over a long span of time so the traits that the characters had just kept on going whether it be for better or worse. In Paul’s case it was definitely worse as his mischief kept on accelerating over and over until he was pretty much a delinquent. He started gambling with the wrong crowd and seemed to have even gotten mixed up with the mob. He put on a brave face at all times and wouldn’t let the others know that anything was wrong but it certainly did catch up to him. It’s a shame because he seemed like a nice enough guy but ultimately if you mess around the consequences will catch up at some point.

Meanwhile Norman was always more laidback and relaxed so this trait carried with him into the present. In some ways it also got him into trouble as he was quick to say yes to a request even if he didn’t really want to do it. This ended up being a focus when Jessie appeared. Norman liked her and while she didn’t seem to really feel the same way, she hung out with him just enough so she could use him to give her brother Neal a friend. She seemed to not be very genuine the whole time so you knew things wouldn’t work out so I was a bit surprised when it did later on. Norman’s attempt to help Neal seemed to have won her over and he was a nice guy from start to finish.

Norman was independent enough now to try and counsel Paul away from his shadier practices though so gone are the days where he would just follow him. Unfortunately it didn’t work out but Norman really did his best at all times. Neal was definitely the worst character by far though. He doesn’t take anything seriously and never acted very mature. He really didn’t put any effort into learning about fly fishing at all. In the end he really just wasted everyone’s time. You can’t help someone who doesn’t want to help themselves after all, so there was nothing more than Norman could have really done here.

Norman’s parents were good. John did well in his Bible teachings to help instill good habits to his kids. He was always trying to be as responsible as he could be and wanted the best for them. Their mother was also good and helped break up their only fight in the film. She helped keep everyone together. At its core the film is about family after all and we got to see how this family operated. They had a good setup here.

One part that I thought was going to be a bigger subplot was Norman seeing if he would fit in after having been gone for so many years. It seemed like he may have been missing some inside jokes and all when he first hung out with the friends again but ultimately that wasn’t the case. He just went fishing with Paul the next day and it was all how he remembered it. The town just didn’t change that much and fishing was the constant that he needed so it all worked out. I was pleasantly surprised that it wasn’t a big deal. They all grew up together so I like to think the friends could have caught him up to speed if it became necessary.

While the movie is a slice of life, we do have more than one death scares. There’s a scene early on where the two brothers go on a very dangerous canoe ride which almost becomes lethal. Then later on while fly fishing Paul gets a little too close to the water and things almost get deadly. In both cases that could have instantly switched the tone and feel of the movie. It adds some tension in for sure and reminds me why I would never take a canoe ride like that and even for fishing I’d stick to the solid ground. Fishing isn’t really my thing either way though so as a whole I would just skip on it. Even just loading up the bait to the hook would be a little too much for me since I’m not big on bugs like that.

Overall, A River Runs Through It is a good movie. It’s certainly a calming type of film if you want to just enjoy the scenery and what the small town experience would have been like. The movie does have a rather sad ending though which may end up defeating the purpose of the title if that’s why you’re watching it. I was a little surprised that it took this turn but I can’t say there was not a build up to it because everything was escalating. I sort of thought it was going to end with everyone fishing and just the implication that things were not going to go well. The film wasn’t afraid to just go through with it though. Either way, the film as a whole is on the upbeat side so it should still work as a calming title.