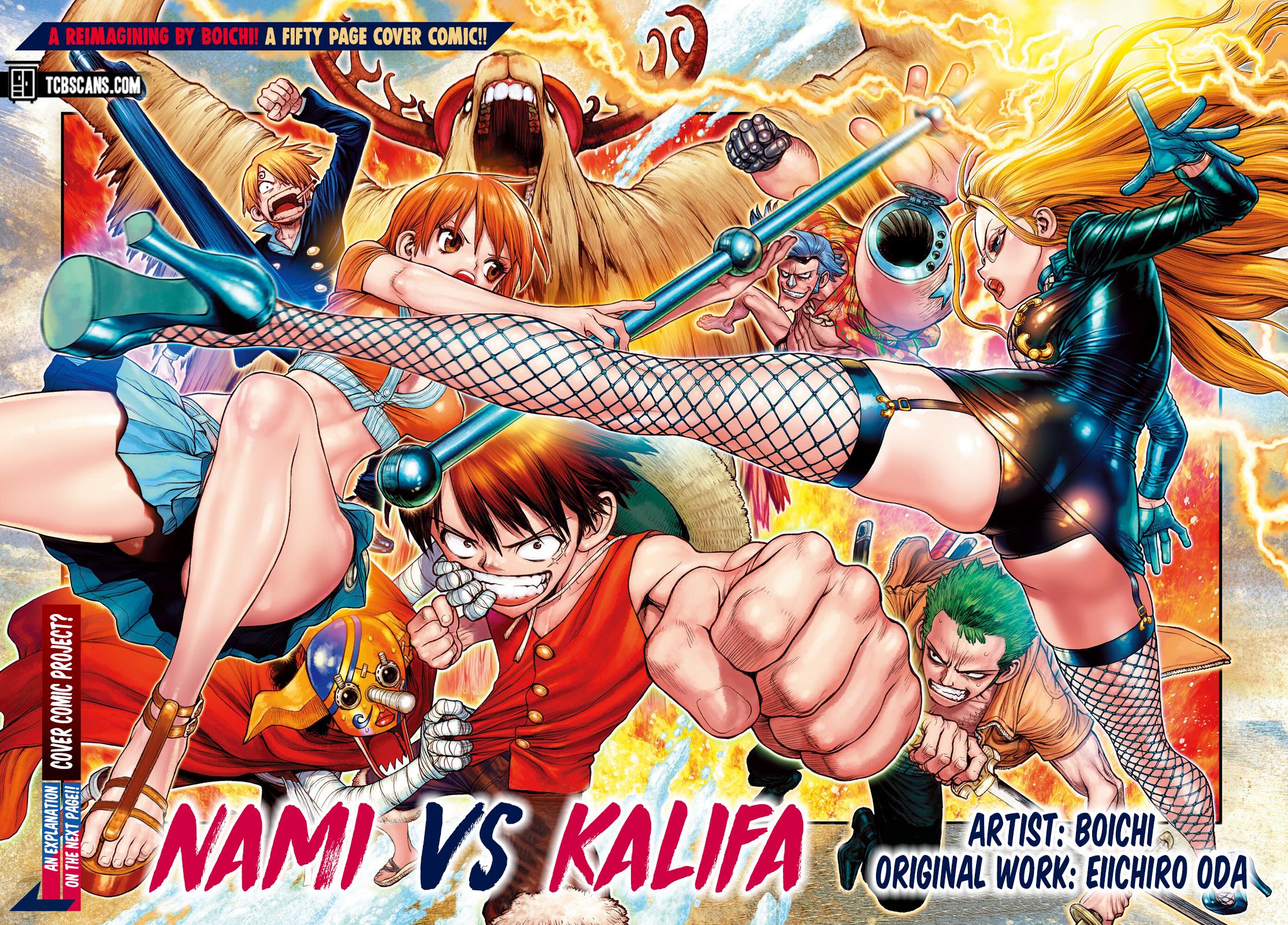 I know what you may be thinking here…DReager1 is reviewing individual fights now? Well, that would be interesting but also a little overwhelming with how many there are so that’s not the case this time. this is another one shot by Boichi which adapts a part of the One Piece manga. This absolutely would not have been my first choice from the CP9 arc but a fight’s a fight I suppose.

Basically the plot is that Kalifa just absolutely devastated Sanji in their battle. He has a rule about not attacking women which is nice enough. I never hold that against him and won’t fault him for sticking to the rule but at least get out of there right? If you can’t fight back then you have to leave or keep dodging with speed. Instead he ate every attack and got wrecked so now Nami has to try and avenge him. Can she really beat someone like Kalifa though?

One issue with this fight has always been that Nami is absolutely no match for Kalifa. I mean it’s not even remotely close. Nami only has the speed, strength, and durability of a normal human. Her main weapon is the clima tact which can simulate weather conditions but takes a lot of time to work. She doesn’t have any real close combat abilities either. Then we have Kalifa who is a professional government agent who knows the 5 methods of death. (Shave, Sky walk, Finer Bullets, Hardening, and the 5th one I always forget) Her speed alone means that she should be able to dodge every single attack from Nami and one well placed finger pistol would end the match in an instant.

That’s not even counting Kalifa’s devil fruit ability which allows her to make people really smooth so they slip and slide while also becoming rather chibi. It’s not a very good devil fruit to be honest but that’s still more than enough to defeat Nami. Now, why pick on this fight out of all of them? Well, it is what I would argue to be the most lopsided fight in all of One Piece. I just don’t see any scenario where Nami should have had even a ghost of a chance. Particularly since this was a 1 on 1 fight with no interference or third parties getting in the way. Nami should have absolutely lost and there’s no way around that.

Now with the power level concerns out of the way, the only real issue here is that the fight is also an excuse for a lot of fanservice. Unfortunately rather than cutting it out, Boichi only serves to enhance this part. The characters are quite exaggerated during this fight with their reactions when the blows aren’t even all that powerful. The chapter is definitely trying to go in a fanservice direction which hurt the overall experience. It’s a shame since I’m sure you could have made the fight more interesting with that effort instead.

Boichi’s artwork is quite detailed so he can do really well on the fights like with Ace and Zoro. There was less hand to hand here but it would have been a good addition. I think he’s worked on Dr. Stone for so long that it has been ingrained into his artwork now though. While the first pair of oneshots looked fairly more like One Piece, lately his characters all completely have a Dr. Stone look to them. It’s a bit on the surreal side. Not a bad thing since the Stone characters have good designs but it feels like they are really barely One Piece characters at times.

The chapter goes by quickly even though it’s so long and you have to give the artwork credit there. The fight may be fanservicey but the action we do get is good. While I don’t buy into the plan working at all, Nami does incorporate strategy into her fighting style. Her illusions really make Kalifa have to work for the victory.

Overall, if you’re a big fan of One Piece then you’ll enjoy this one shot. It’s pretty cool how the series is so big that it can have chapters remade by different authors. I’d like these one shots to keep on coming since it is nostalgic. I like to think the next action chapter will be for a better fight but even if not, I am pleased to have more content to read. Even more than the normal illustrations each artist gives in appreciation of One Piece, seeing a whole chapter/fight redrawn by someone else gives you a good feel for how the series would look if they were in charge. I’m not sure this would be a fair way to gauge the series if you hadn’t read it before though so I would read one of Boichi’s other one shots to start off with. If you’re a One Piece fan then you should definitely check this one out though.

2 thoughts on “Nami vs Kalifa Review”