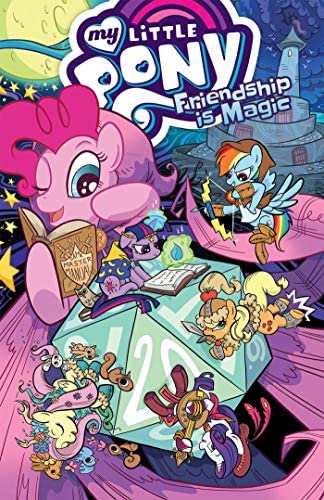 Do you know what time it is? It’s My Little Pony time! It’s been a while since I read the last volume but this is the kind of series that is easy to just dive into and have fun. The stories here are standalones as we are in between the big arcs so that helps as well. Some stories may be stronger than others but at the end of the day it’s a fairly balanced mix and you will have a good time here. It’s easy to see why the series has so many fans because it’s just enjoyable to read through. So lets dive into the stories.

The best one in the collection has Pinkie Pie decide to test her friends’ teamwork skills. Basically she has constructed a really large tower and the heroes have to cosplay as action heroes and try to climb it. They all try to climb the tower individually at first but it’s not working out so well so they may have to actually team up for once. Can they put their pride aside in order to do this? Well that may make things sound dramatic as they often team up so it’s technically not a big deal. I do think they were hoping they could win without help though, I just got that idea at least from how they tried on their own first.

It’s solid because I always like seeing the Mane 6 have to try and overcome some challenges. This one may have been created by Pinkie Pie but the challenges were very real so it wasn’t like this was a walk in the park. Most impressive of Pinkie Pie I must say even if she was being a little petty at the end. I think the heroes deserved a real prize for their hard fought win. Ah well, they had fun and that’s what counts I suppose.

Then we have a story with Mayor Mare. It’s time to throw her a surprise party but unfortunately it isn’t easy to catch her unaware. So the heroes have Apple Bloom try to pull this off which almost gets tragic as Bloom says that she looks up to Mayor Mare and everything to distract her all day. The Mayor was really happy about this so she’d be absolutely crushed that it was all an act. Fortunately the comic doesn’t go down the tragic angle and things end well with the nice party.

It would have been a little upsetting if things had gone badly for Mayor Mare so I’m glad that it all worked out. The story’s more on the low key side as the subplot is Twilight Sparkle trying to get a good act to go on stage but they all keep getting shot down. Her stage partner was really a harsh critic but fortunately Sunlight Shimmer was here to help. She was always one of the best characters so it was nice to see her even if the appearance was completely random and out of the blue. Sometimes that’s the best way to be a guest star though right?

In what may have been the weakest story of the bunch we follow the Wonderbolts as they’re getting ready for another big sky show. Unfortunately one of their members gets injured and won’t be able to perform. There’s one filly who really wants to be a member but is an Earthpony who can’t fly. That’s a bit of a non starter for an aerial group of ponies but you can admire the heart and passion of this I suppose. We get a story about how their used to be an Earthpony who pulled this off with a flying machine like a super old fashioned airplane. It’s nice and heartwarming so I’m glad the Earthpony got to be in the show a bit but ultimately I just don’t think that’ll work.

It’s one of those sad cases where the dream is just about unachievable. Sure you can include the pony in a show or two to make his day but it sort of take away from the point of the group. Nobody is going there to watch a pony operate a vehicle, they want cool flying stunts and that won’t be possible if you can’t already fly naturally. I’d say that was the real crux of the issue.

Then we have a story where one pony needs a dog sitter but none of the Mane 6 want to help. It’s rare to see them all trying to get out of the way instead of helping out but this dog is a really big Cerberus so he won’t be the easiest to handle. Rarity had no excuse even compared to the others so she gets the job and initially it is quite hard for her. Ultimately she is able to push through though and after some encouragement from her younger sister learns about patience and dealing with bigger animals.

It’s a solid story with a good message at the end. I do think Rarity could have handled the whole situation better right from the jump though. The dog wasn’t even mean or anything. Sometimes in these kinds of stories you’d have the dog being a real handful the whole time but I didn’t really get that vibe from him. He wanted to play a lot sure, but then just play with him. Who doesn’t want to play fetch with a huge dog! At least now Rarity will be ready for the future.

Twilight gets her own story next as it’s time to put on her detective hat. I remember Rarity being the real detective of the group to be honest but Twilight has apparently solved tons of cases of her own so this is right up her alley. See there’s a big turtle competition coming up soon but one of them has vanished. Now the whole town has lost the will to fight and the only one who seems happy about this is the owner who always comes in 2nd place. Hmmm, this is a little suspicious isn’t it?

You can probably tell where this is going from the jump but it’s still a solid story. I do think that the kidnapper gets off extremely easy though. I would have liked some kind of penalty here. Of course you shouldn’t go to jail for something like that in Ponyville but some community service never hurt anybody. If they threw that in there I think it would have helped the ending. Still, I like a good mystery so this was a fun adventure all around.

So those were the stories. They all feel like they could have been real episodes although you’d probably need to merge two stories each time since they go by fairly quick. You could pad them out but that is always tricky. The writing is good enough where they could pull it off though. The artwork here is solid and always looks like the TV show as well. It makes for easy reading as you’ll just barrel through these volumes. The generation may be ending as the new one comes in but at least through the comics there are still tons of adventures that I haven’t read yet.

Overall, If you like the My Little Pony series then you will definitely like this comic. It’s a solid collection of stories about the group and so what more could you ask for right? Each pony gets something to do here although I guess Applejack would be the one with the smallest role as she didn’t star in any of them. I’m sure that’ll change in the next volume since this one had 5 issues and not 6 so she still has a lot of time. I’m getting closer to volume 20 now!