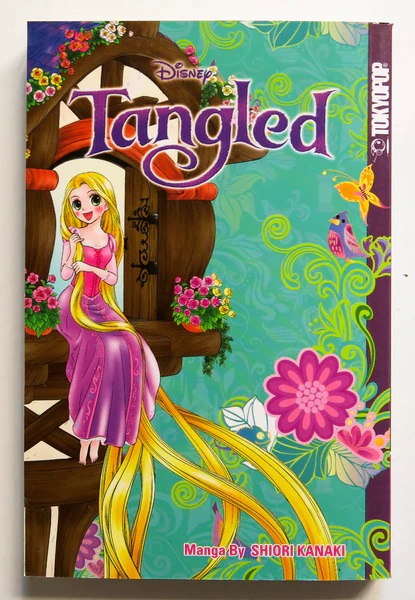 It’s been a little while since I saw the Tangled movie. It was a pretty solid film and it actually had some real danger with characters getting stabbed and everything. The manga does a good job of readapting the events and so you do get the movie experience here. You won’t get to fully experience the songs of course but if for any reason you can’t find the movie, this will fill you in on the details pretty well.

The story starts by explaining how there was a magical flower that could be used to cure any illness and so this was given to the queen once she had grown ill. As a result her baby Rapunzel inherited this ability through her hair and so she was kidnapped by Gothel who had been using the flower for many years to stay immortal. Gothel would just cut Rapunzel’s hair and be done with it but the power goes away when that happens so her best plan is to trick Rapunzel for the rest of her life into working for Gothel so Gothel can keep using the power to stay young. This plan works out for many years but Gothel was a little too possessive in keeping Rapunzel in the tower.

So one day Rapunzel decides to leave and her opportunity comes when a thief named Flynn barges in with a crown he stole. Rapunzel hides the crown and says that he won’t get it back until he takes her sight seeing around the kingdom and specifically, she wants to see the mysterious lights that go up once a year on her birthday. (Gothel messed up by not giving her a different birthday) Flynn agrees since he wants his crown but as their adventure goes on he learns valuable lessons about friendship and what it means to value someone over normal jewels and riches.

It’s a fairly straight forward story and you can pretty much guess how it plays out but the execution is on point which is the important thing. This is a very low key story but one that will keep you interested. The characters are good and we do still have some danger here as like in the movie Flynn does get stabbed at one point. Gothel makes for a very solid antagonist here. Sure, she may not be the smartest in some ways as she creates a lot of problems for herself but she did keep the ruse up for many years so she gets some props there. She can also fight and isn’t above getting her hands dirty. In some ways that may be the most impressive part of her character.

As for Rapunzel, she is a solid main character. She took matters into her own hands in beating up Flynn and had a nice plan for escaping. While her hiding skills may not be the best, she is able to keep on winning until she gets things right. She’s a very determined character and that’s a good trait to have in any main character. Rapunzel also sticks up for herself when she knows that things aren’t right. When you add that all up I dare say that she is more likable than a lot of the more classic Disney princesses.

Flynn is less heroic than most of the main guys in these Disney adventures but that does mean he gets to learn more lessons. He goes from being someone who will easily betray his friends to someone that Rapunzel can count on. I do think he looks rather unimpressive in the fights though as Gothel easily takes him out and he loses a lot of fights here. He will have the rare moment where he looks tough like when he fought the villains off with his frying pan but that’s about it. Usually it’s still game over for him but he gets some decent banter with Rapunzel.

The art here is okay at best. It’s pretty much what you would expect from a movie tie-in. It’s not going to get the high quality art of a classic ongoing but it does its best to look like the movie so that’s a decent start. Think of this like a Shojo one shot for an artist that’s just starting out. I will say that the paneling is good though and it’s easy to read through the volume. It feels really short by the time you are all the way through it and that’s always a good sign.

One of these days what they should really do is grab one of the movies but instead of ending where the movie ends, just keep on going. Have the series surprisingly become an ongoing where the adventures continue. Now that would be extra interesting and there are a lot of ways that this story could have kept on going naturally. They certainly won’t run out of threats to the Kingdom and having Rapunzel return could make a lot of thieves think about an easy pay day once her powers return. (Because you know that they would!) It could easily be a fun action adventure story.

Overall, Tangled is a very safe manga I would say and that plays to its strengths. It’s very low key and you won’t think about it all that much but at the same time it’s still easily able to achieve a high score because there’s nothing bad about it. It’s just a fun adventure that you read through in no time and have no regrets over. The core story is a solid premise that always works well with good writing. I would recommend reading this manga if you haven’t seen the movie. If you’ve seen the movie then I don’t think there is a whole lot of point to reading the manga but hey if you want to relive the adventure then this is a good way to get a different spin on it. It’s effectively the same but reading will always feel a bit different than watching something.