All right we’ve made it to the Episode 7s of the series. This time the rankings get mixed up quite a bit with some really high ranking volumes taking a lower spot than usual and Volume 3 gets dethroned this time. I figured it had to happen eventually since Volume 3 may be my favorite volume but it’s still hard to see how it can win every episode like that. I’m really looking forward to compiling the rankings later on to see how each volume really stands up. Well, lets dive in as most of the volumes begin to prepare their climaxes. 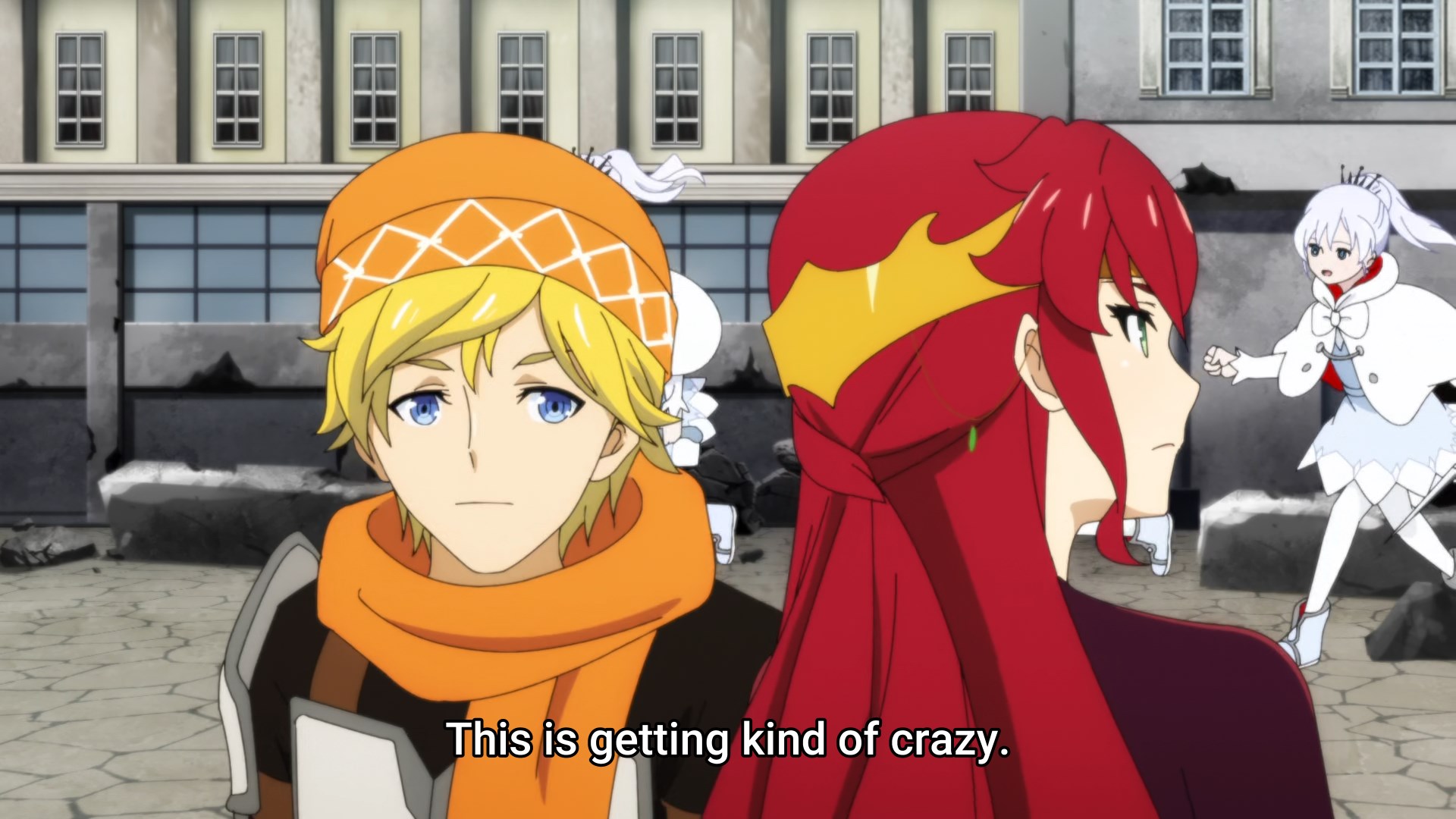 It’s Ice Queendom’s first time at the bottom. Mainly this episode allowed Jaune to see into the dream but because of that we’re seeing a lot of things that we already know. The Mini Weisses were fun though and then they even got to turn giant. The cliffhanger is definitely the best part though and that nearly bumped it up a spot but the volume right above this one also had a powerful cliffhanger like that. It’s nice to have Jaune in the mix but I look forward to the volume throwing in some more action in the next episodes. 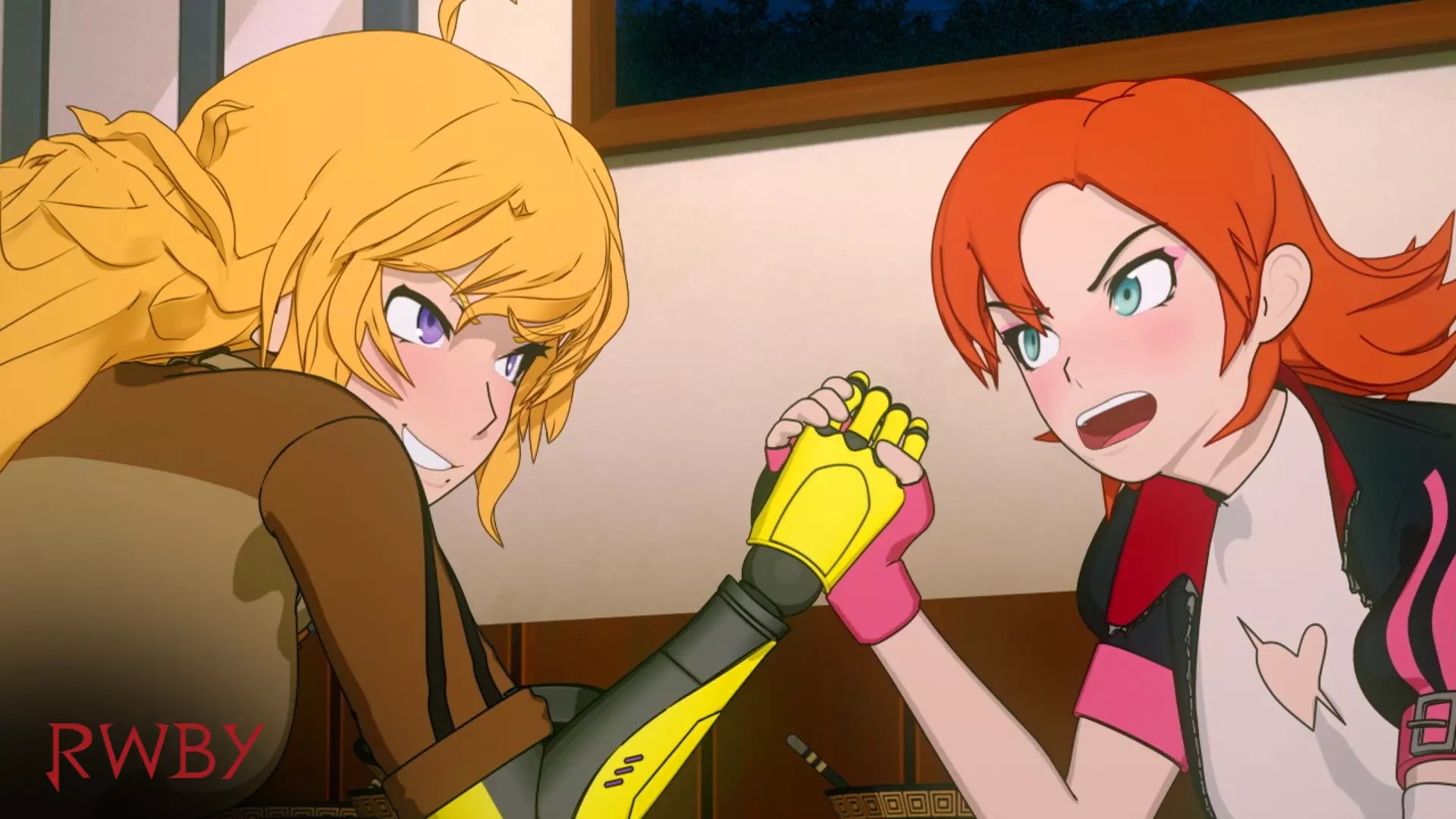 This is one of those Volume 5 episodes that got the volume infamous for how long the heroes just sit on the couch and talk about things. They become more reactive to the plot rather than being proactive. Still, I suppose some of these things are topics that the heroes needed to discuss at some point. I don’t think the outrage over characters being turned into birds was really a big deal but Ruby should have asked about her silver eyes by this point. The heroes would go on to make a lot of tactical blunders by not using this time to the max. The cliffhanger was really epic though with the villains showing up to attack Raven and her clan. Weekly there weren’t a whole lot of moments that could try and top this. We had been waiting for a big Volume 5 fight and this seemed like it was about to deliver. 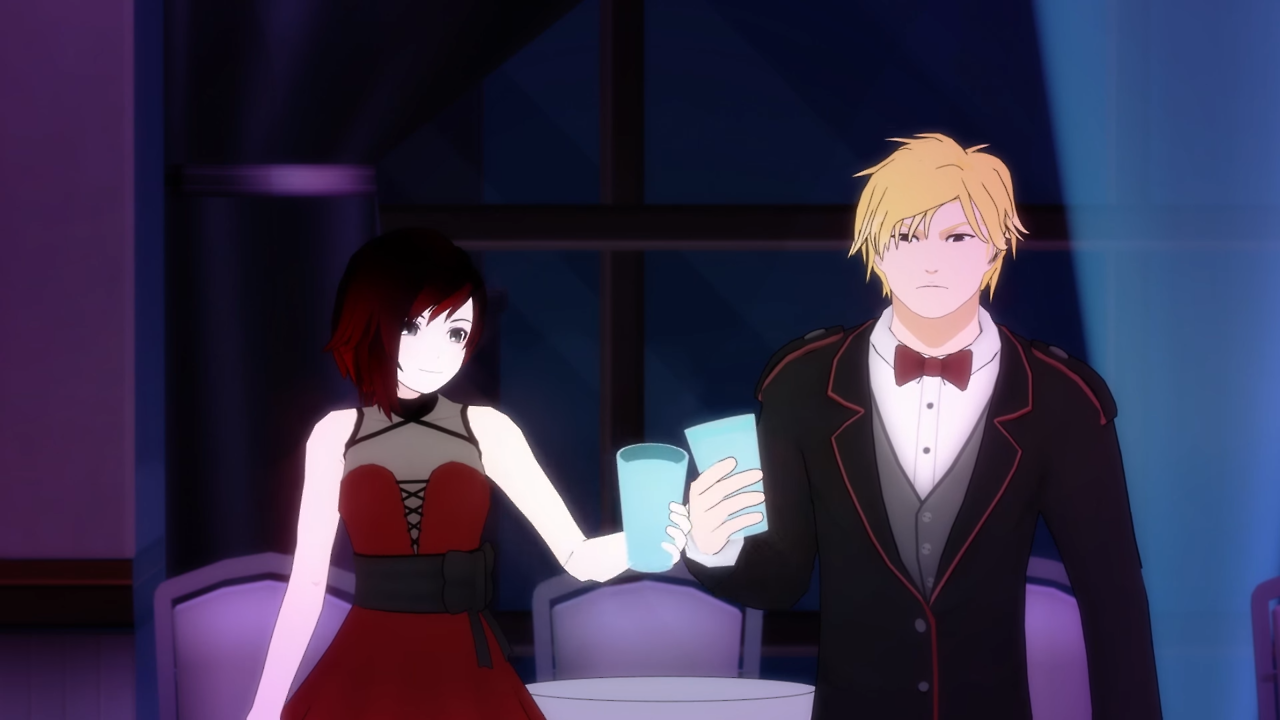 The dance is underway here and the first half is fairly emotional as Jaune finally stops chasing after Weiss and goes to Pyrrha instead. This ended two rather large plots from volume 1 so that’s over now. Meanwhile Cinder begins her infiltration plan which would have a big effect in volume 3 and her fight with Ruby was fun. Ruby is lucky that they were interrupted though because at this point in time she would have absolutely no chance at victory. The gap in power would just be way too much. Good way to end the episode and I always like throwing in some action at the end. 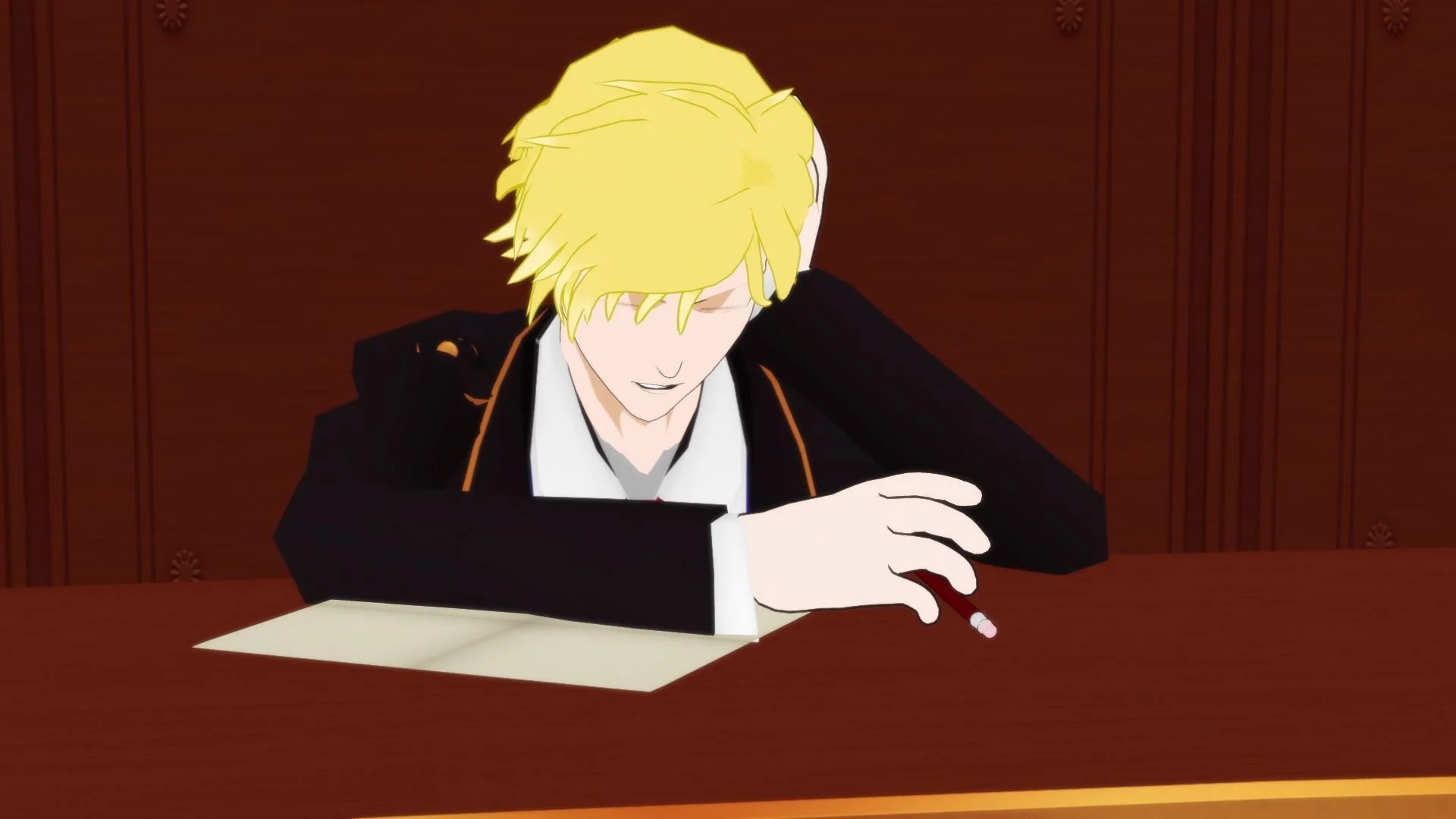 There may not be a lot of action in this one but it’s a fun episode with a lot of the retro humor from the old days of RWBY. My only gripe is with how none of the heroes step in to help Velvet at all. Given that part of the episode is the professor talking about how the Faunus are treated badly and face discrimination outside, you’d think that the heroes would prevent this from happening in school. Particularly Blake…cmon now. I do think the whole scene would play out very differently if it was newer since we know Velvet actually can fight and I don’t see her teammates being kept in the dark for long. Once they find out that would be game over for Cardin.

It’s a rough episode for Jaune though as he gets bullied a whole lot. The main issue here is that he’s super weak and knows it but also wants to have enough pride not to ask for help. It’s not a very compatible set of ideals there because then the only option left is to remain weak. We never see him training either and this leads to him getting blackmailed. You feel bad for the guy but this is very much a hole that he dug for himself which is the worst part of it all. 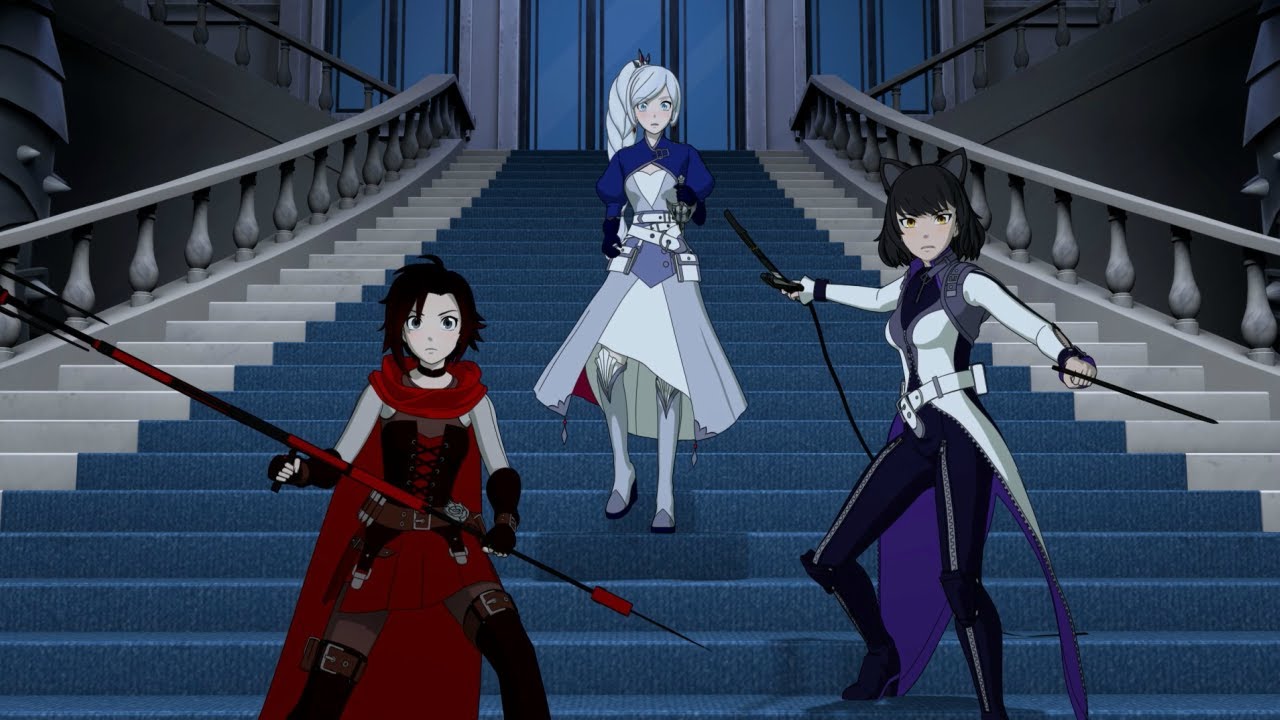 Volume 8 has had a lot going on so this is a bit more of a slower episode for the heroes to catch their breath. Team RWBY is berated by one of the Happy Huntresses who comes across as being extremely annoying and out of touch here. She complains that the heroes aren’t doing enough but they’ve done way more than her. At this point the team is starting to split at the seams a bit so the last thing they need is someone on the outside trying to lecture them. Meanwhile Oscar is still being beat up but seems to get through to Hazel a bit. I’m a bit iffy on Mercury letting himself be kicked around by Tyrian the whole time though. I guess Tyrian is stronger but Mercury should go down with a fight. I am looking forward to seeing his role in volume 9 though. As always with Volume 8 the overall atmosphere and intensity keeps things going at a high level even when there are no main fights. 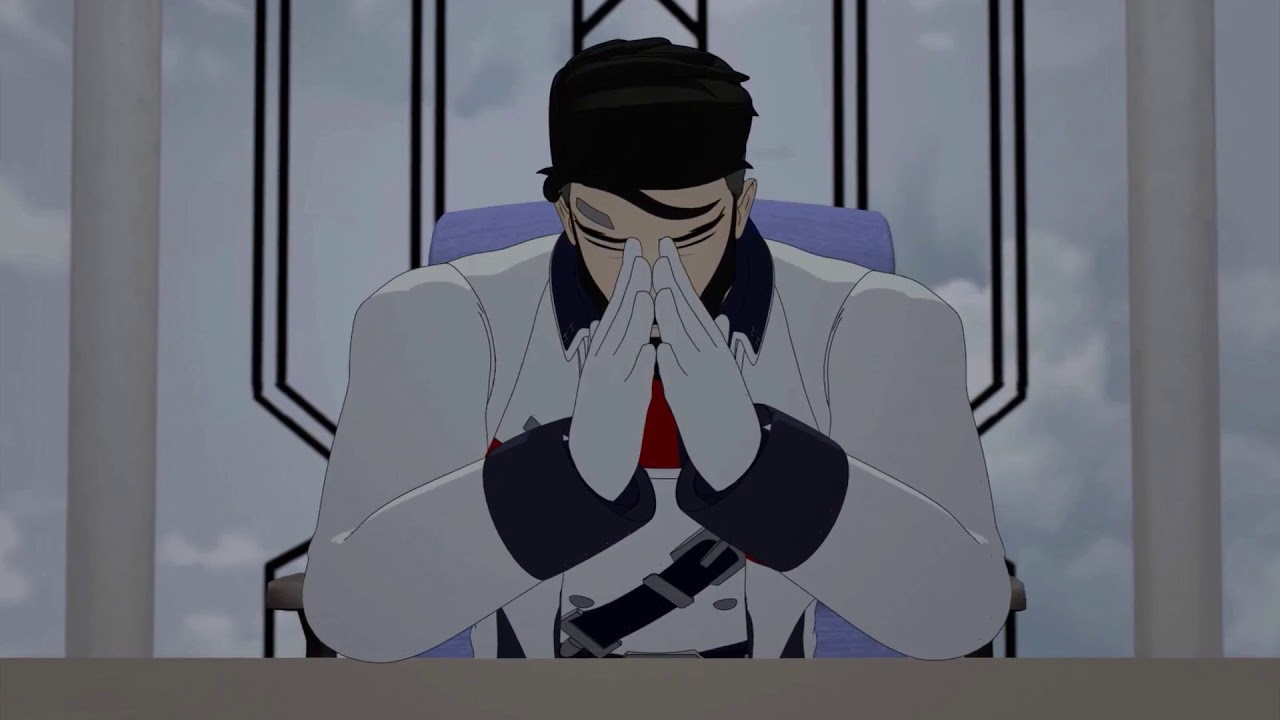 This episode sees the team slowly start to keep more and more secrets from Ironwood. Yang and Blake decide to defy orders and tell Robyn all about his plans which was not a great idea. Sure in hindsight it may be okay but they really just took a huge risk in disclosing this all to a character they didn’t personally know all that well. Robyn seems like a nice enough person but you’re going to just trust someone like this who just lost an election and is probably not in the best frame of mind? Later on this would not help matters with trust but the quick fight was good. The constant tension between all of the characters keeps this really high up. I still say Volume 7 easily had the best plot out of all the sagas because you can see how Salem is slowly taking away every good option and increasing the pressure on the heroes. So eventually no matter what option is chosen, the heroes would be split apart about it. 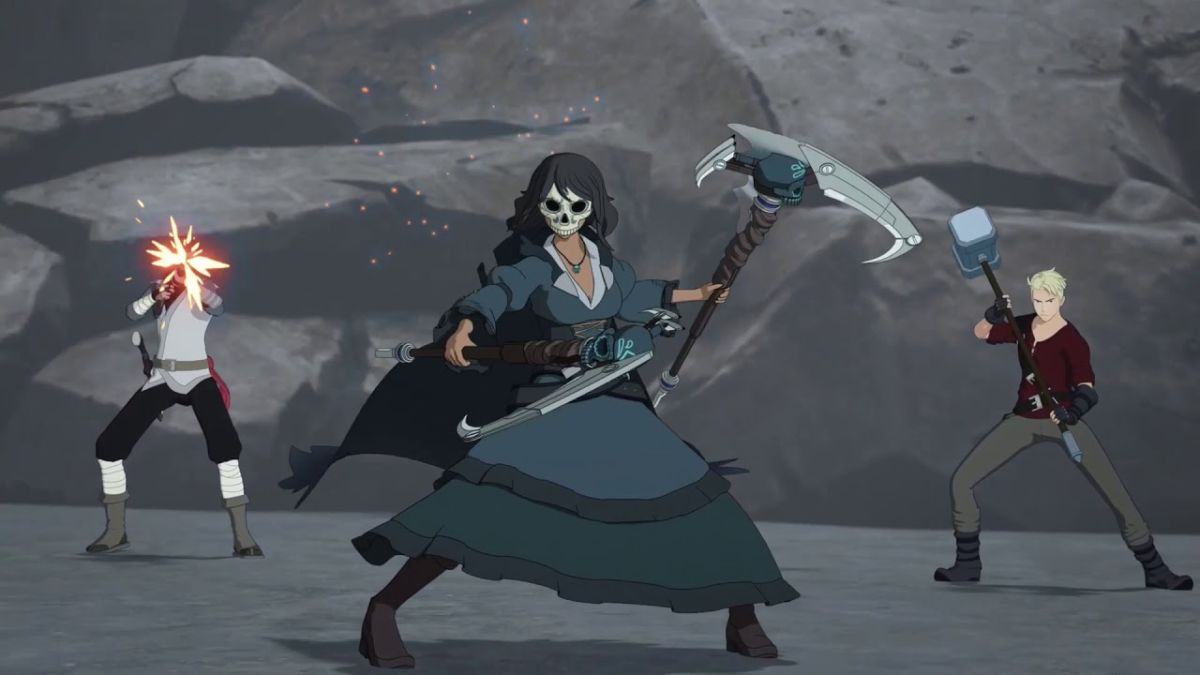 We have made it to the Grimm Reaper episode. It’s actually relatively short as far as the modern RWBY episodes go but because of that the whole thing is a big fight from her old days as a huntress. I really liked everything about the fight from the choreography to the individual fighting styles and semblances. The villain with the crooked teeth really made for an imposing character and her semblance preventing damage for 60 seconds is really useful to have. It’s probably one of the best flashback stories in the series with maybe just Cinder’s coming really close or surpassing it. 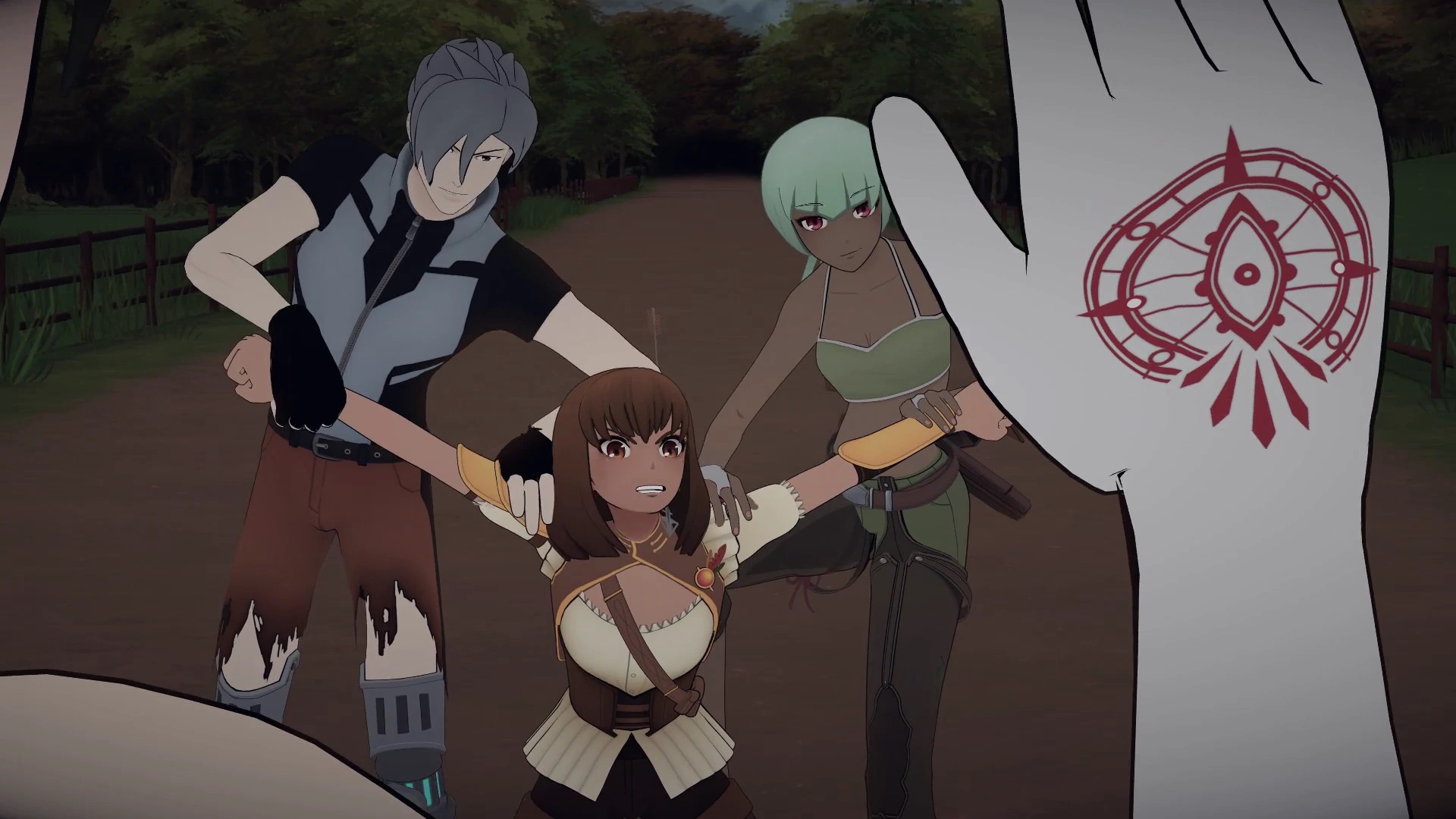 Volume 3 just barely missed out on the top spot this time! We get to see how Cinder formed her group with Emerald, Adam, and Mercury. It’s a really solid episode and I also greatly enjoyed the fight with Amber, the maiden. She put up a great fight and while you know that she has to lose, you still want to see how it goes down. She was very close to winning and that’s impressive considering who she was going up against. Having a whole episode dedicated to the past like this is a bold move but it’s one that works out really well and sets you up for the climax that is going to happen. Cinder’s plan has been going on for quite a while after all so we’re about to see the payoff. It’s just a very effective way to show this off and I also liked that Adam didn’t go along with the plan at first since it wasn’t a great idea for the Faunus. 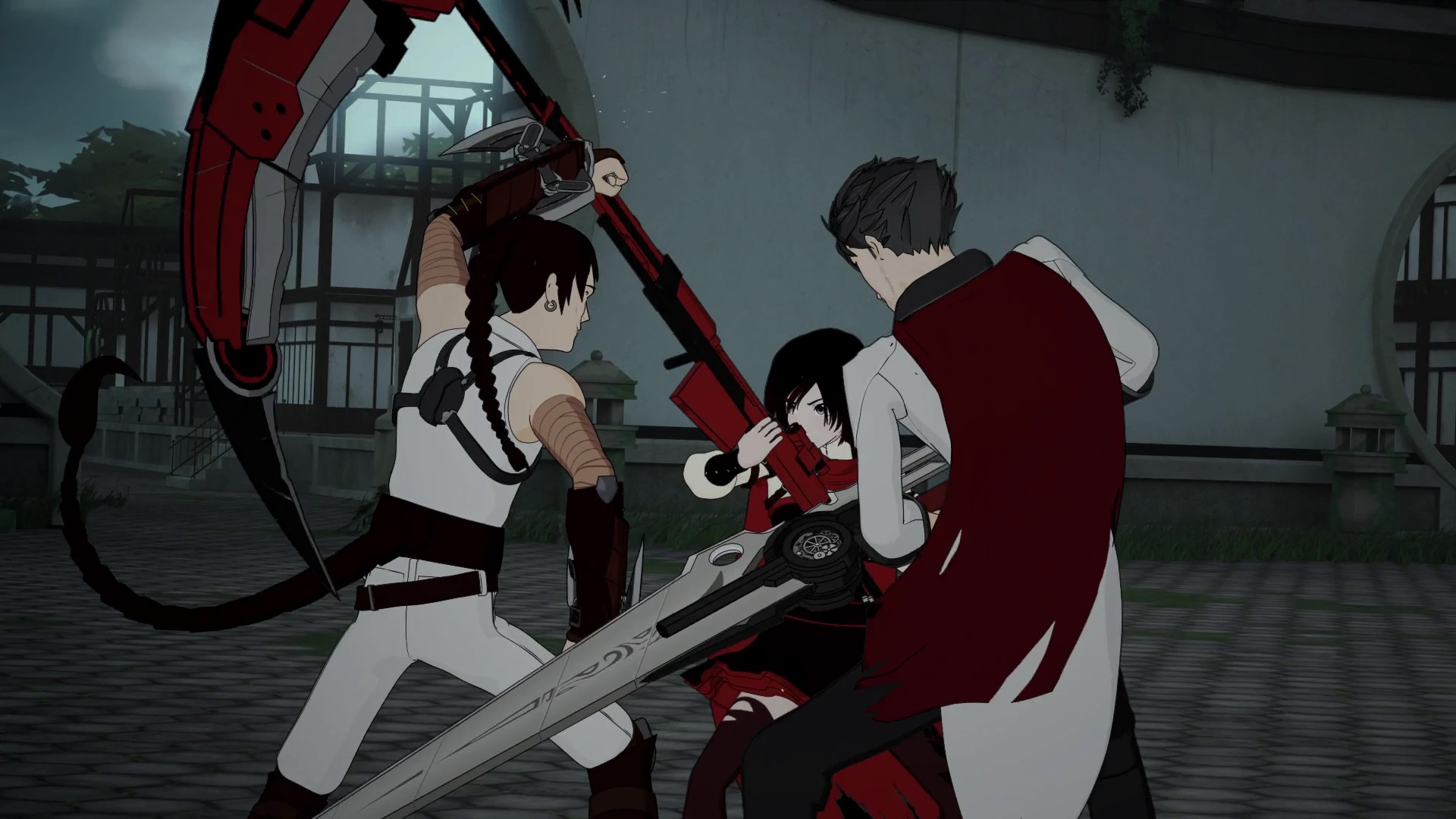 Volume 4 is nearly near the bottom so it’s nice to have it at the top. Unfortunately the volume peaks early so nothing else will rank quite as high as this one. We got the full Tyrian vs Qrow fight here which to date is still one of the best fights in the series. The new song used was excellent and the fight choreography was like something out of Volume 3. It was a high stakes fight with two professionals and we really hadn’t seen anything like that before. This was the first real time and the battle definitely lived up to that.

So those are all of the Episode 7s here! It was a really solid batch and we saw some good shakeups here. We’re getting closer and closer to the big climaxes for each of the seasons so I’m looking forward to covering those. It would have been nice if I finished this and then Volume 9 was ready but sadly it’ll probably be a while until that one comes out. In the meantime at least I’m keeping my RWBY knowledge very fresh.