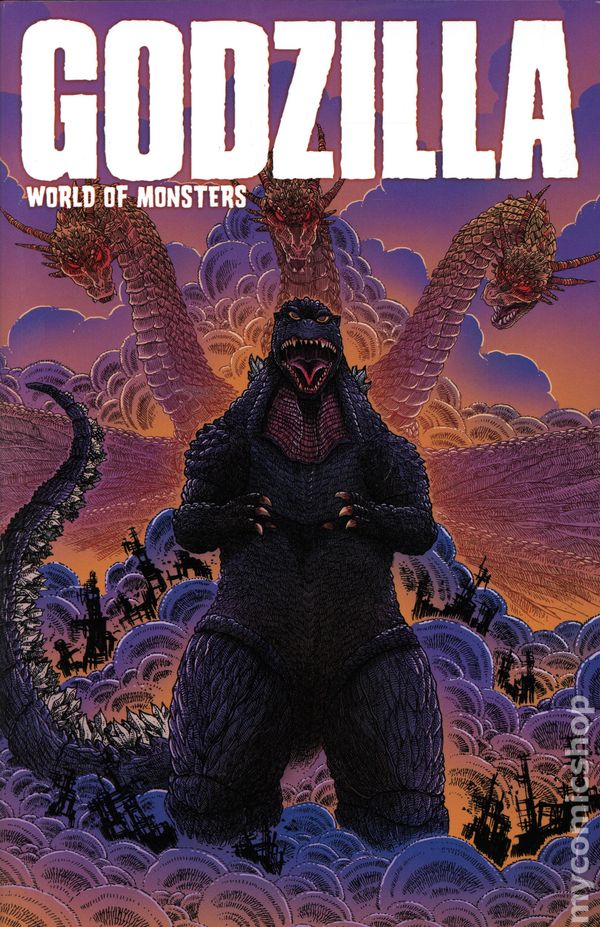 Godzilla has returned! Lesss gooooooo. So after all these years I’ll now have gotten to read 6 different Godzilla series in one month. It’s nice to be catching up on all these titles after so long. In general the previous collection probably takes the win but the comics here are all solid as you would expect. Godzilla Oblivion is the weakest one but feels the most traditional while the gangsters series is the most different but ended up being the best. Rach series is quite different from the others so you certainly can’t say that the series is trying to play it safe. This title isn’t afraid to keep on switching things up.

First up we have Gangsters and Goliaths which follows a guy named Detective Sato. He’s been after a criminal group for a very long time now but unfortunately this group has grown too powerful. They now have people inside of the police force and just about everywhere else too. There is no way to escape from them and he is slowly seeing how futile the whole thing is. No matter how fast or far away he goes, the villains are right on his tail. His only chance now is a desperate one. He kidnaps the two priestesses who control Mothra and decides to use them as hostages so that Mothra can destroy the gangs. Naturally the gangs can’t do anything against a Kaiju but this is a dangerous game that he is playing. All it would take is one slip up and Mothra might end him in an instant.

Sato is a decent guy who has been taken into a rather extreme situation. The comic does make it clear that he wouldn’t actually shoot any of the two girls so that was good since it would have completely tanked his character. Still, taking hostages is certainly not the best plan in any case. Additionally he goes on a bit of a power trip by the end where he actually starts to try and drag the situation out. Rather than just end the gang in an instant he wants them to know that Detective Sato was the one who did them in and this is what makes things tougher for him. If he had just gone straight for the win then he would have saved himself a whole lot of heartache.

Mothra’s faction don’t look great here either. It’s like none of them can fight. I understand that they’re pacifists for the most part and get that but you have to still know that other people are ready and willing to fight. So when you walk up to a mobster with no plan and get shot it just makes these guys look bad. Mothra needs to re train her faction right from the ground up in order to get this all taken care of. They shouldn’t be getting handled by a normal guy like this. As for the actual human plot, I sort of missed the monsters the whole time. The gang plot is well written but since you’re reading Godzilla you’re hoping for more explosions and Kaiju battles. Now that’s something that would help elevate this to a whole new level. This was a good way to kick things off though and life does go on even while Kaiju are around so it does make sense that there would be gangs running around.

In Cataclysm we see that Godzilla successfully took down the entire planet. It’s now a wasteland with nothing left and people live in a very apocalyptic environment. At this point it’s a struggle just to stay alive. Only one Kaiju wants to bring the Earth back to life and that’s Biollante. Well, I guess Mothra is around to help but Biollante has the nature energy to revive the planet. The problem is that Godzilla keeps murdering her before she can really generate enough power. Hiroshi blames himself for this because he was part of a government experiment about mind controlling Godzilla and of course it went terribly wrong. All he succeeded in doing was getting that Kaiju real mad. Godzilla holds quite the grudge as he wants to doom the planet forever now. Hiroshi’s only chance is if he can escape with part of Biollante to buy her some time but this won’t be easy because Godzilla is king of the monsters. He is always around ready to dish out some pain.

The setting here is definitely very dreary and the comic paint quite the picture of what would happen if Godzilla won. There is a lot of narration from Hiroshi as he believes that nobody can ever truly know Godzilla so this might not even be rage but just Godzilla doing whatever he wants. There isn’t really a way to know for sure and that’s the crazy part. So in the grand scheme of things the humans couldn’t do much. So this makes for a decent survival story. The humans tend to look really bad here though. Some immediately want to go back to sacrifices and such to appease Godzilla while others just turn back to a life of crime. Hiroshi’s relatives blame him for everything even though that’s unreasonable because he was just following orders and had no way of knowing that this could even happen. Hiroshi was feeling guilty about the whole thing all these years but technically speaking he wasn’t as responsible as he figures. It would have been nice if the other characters could have acknowledged this.

I’d say the best part about this series is that it really shows why Godzilla is the king. It’s clear that no other Kaiju was able to even come close to his overall abilities and that’s how it should be. A king should be considerably stronger than the others and Godzilla proved that with ease. This comic really understood that aspect of his character which was great. I’m also cool with the humans panicking and looking awful since I could totally see that happening if we ever got a Godzilla. It’s annoying to watch but it definitely tracks.

Finally we have Godzilla Oblivion. So there are a bunch of scientists who are being paid to create a giant portal. They complete this task and then reluctantly turn it on because the boss wants a demonstration. This leads to all of them heading into a parallel Earth that is filled with monsters destroying everything. This isn’t exactly what they bargained for so they head back home but Ghidorah follows them and destroys everything. A few years pass and the heroes need to open the portal to send him back home but is that even possible?

The humans are completely out of their depth but what else is new right? Just trying to dump all of their problems onto another Earth isn’t the best idea either. The scientist tries explaining that but gets overruled the whole time. One issue here is that a lot of the characters look really similar. Throw in the fact that this comic has a unique style of framing the panels where you rarely see anybody and it can be really easy to mix everyone up. I feel that this does limit the series from the jump because it sort of takes you out of the experience. There’s not a whole lot to care about in the human plot because they all get mixed up and are thinking about themselves anyway.

I was actually kind of happy when the other Earth decided to throw all of their Kaiju at us because our Earth was being so annoying about the whole thing. They’ve got some really valid reasons for just doing this because it seems like our humans would have done the same thing if they could have. At first the other Earth actually seemed like decent fighters but in the end they were just doing their best to survive like we were and weren’t exactly winning the fight. The Kaiju are just too tough and relentless like always.

We do get a good amount of Kaiju action here which is always good though. They all get to show their stuff from start to finish. Godzilla looks like one of the big shots but we also have Ghidorah and Destoroyah running around so this time he has some actual competition instead of it just being a cakewalk for him. That’s good since you always want to have a little bit of a challenge there. I’d say we could have focused less on the humans and more on the big Kaiju action.

The art throughout these issues is fairly good. I wouldn’t say it ever gets amazing but it’s pretty solid. You really get to see the different energy attacks and the Kaiju designs definitely stick out. That’s the important thing here since you really want them to be able to stand out. There was a body of a dead animal in one comic that felt rather unnecessary. Fortunately it was a passing shot and had been gone for some time but I always get nervous that an animal will be collateral damage in one of these issues so the comics need to watch out.

Overall, Godzilla Oblivion is a very solid comic. It’s got a whole lot of action to it and a nice variety of stories. You should definitely check this out if you’re a Godzilla fan. Who knows maybe one of these comic series will be turned into a film or a TV show someday. There’s always hope out there and I think that could work really well. To keep things expanding I would probably say to do an original story instead but if it does get adapted then we’ll be able to see these fights on the big screen. Sadly Orga doesn’t appear here but I can still hope that he will return one of these days. He’s easily the most underrated Kaiju and it’s not even close.