It’s time for the first ranking without Volume 1. It’s a bit odd to see the list only have 8 spots instead of 9 but we’ll see which volume takes this chance to nab the #1 spot. With every volume going all out you can bet that the rankings are going to be quite stacked here. 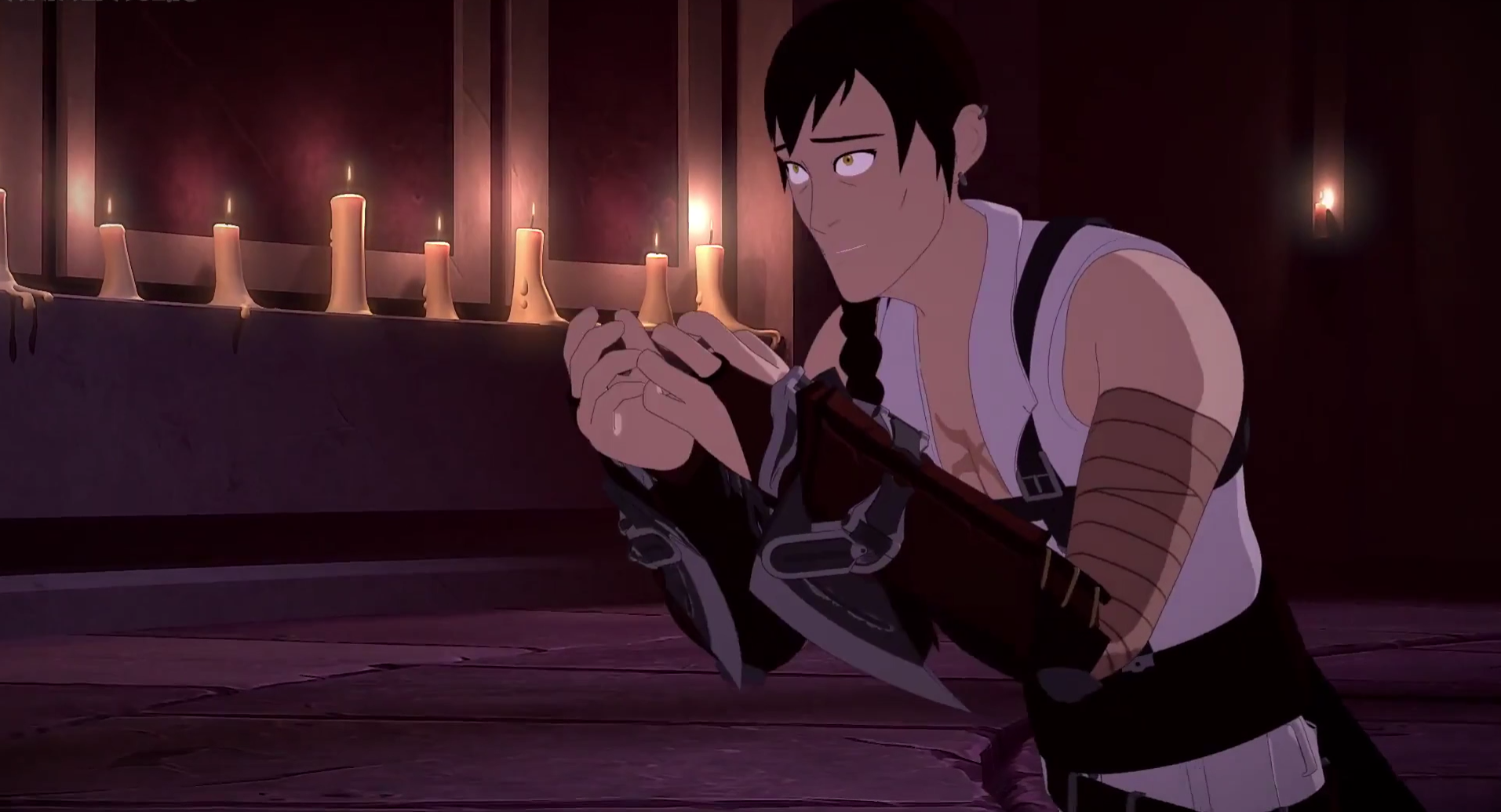 Volume 4 has to bring up the rear again but we have a lot going on here. Each of the main plots gets some screen time as we set the finale up. Blake is finally getting ready to fight against the White Fang and Weiss is leaving Atlas. Yang has also decided where she has to go and Team RWBY is face to face with one of the most powerful Grimm that they have encountered yet. This is one of the last times that there would be a Grimm strong enough to take on the whole team like this so you weren’t likely to forget it any time soon. While this episode ultimately couldn’t quite hold its own against the other volumes, it’s still a strong episode all around. It’s part of why Volume 5 was so much fun since the heroes finally got to all meet up again after being apart for so long. 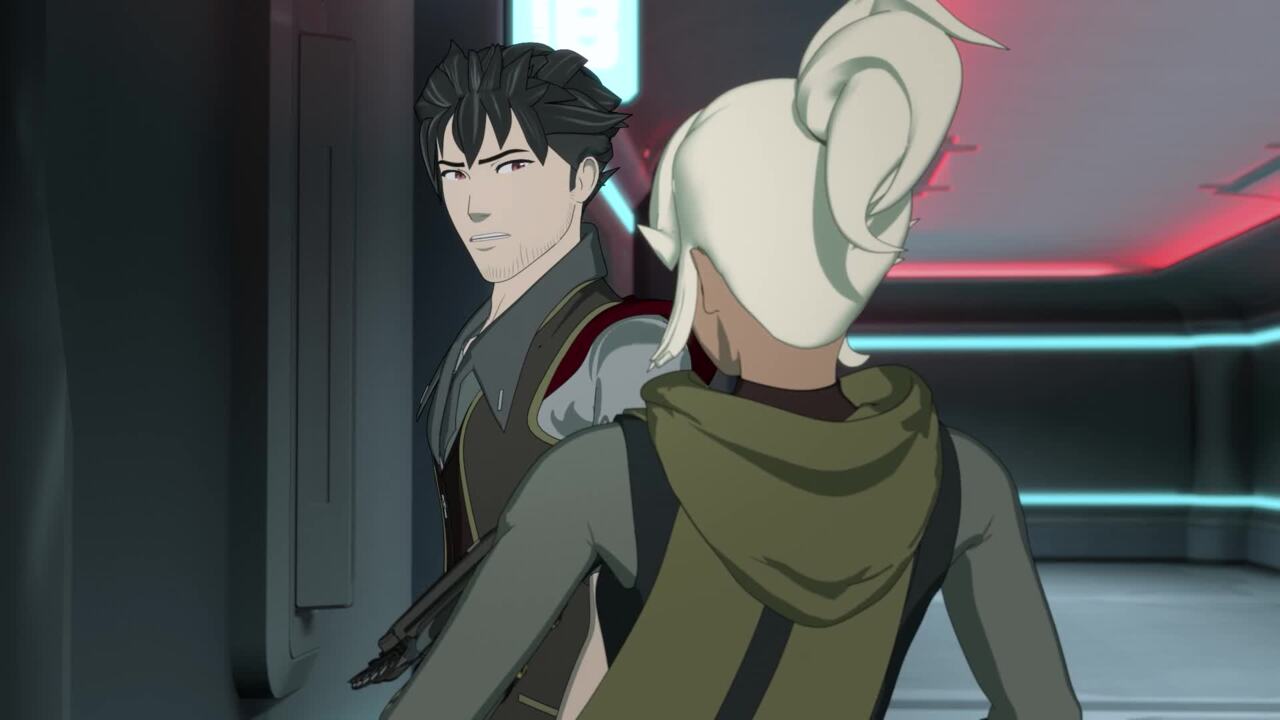 This is a bit of a breather episode compared to the rest that we’ll be getting in the season. Ironwood proves that he is quite serious about blowing up the city and any rationality that he may have had is out the window. He’s now a crazed villain through and through which is unfortunate since he was such a good anti hero but that’s how it goes. Ruby gets her next plan underway and it’s always nice to see Yang supporting her throughout everything that happens. It’s one of the many reasons why Yang is such a great character.

It’s still a bit surreal to see Emerald as one of the heroes now. She has certainly come a long way. It’s also good to see Qrow acting more like his old self as he’s back to being a fighter and a team up with Robyn is a good idea. Robyn is perhaps being a bit too cautious while Qrow is too aggressive so it makes for an interesting combination right there. 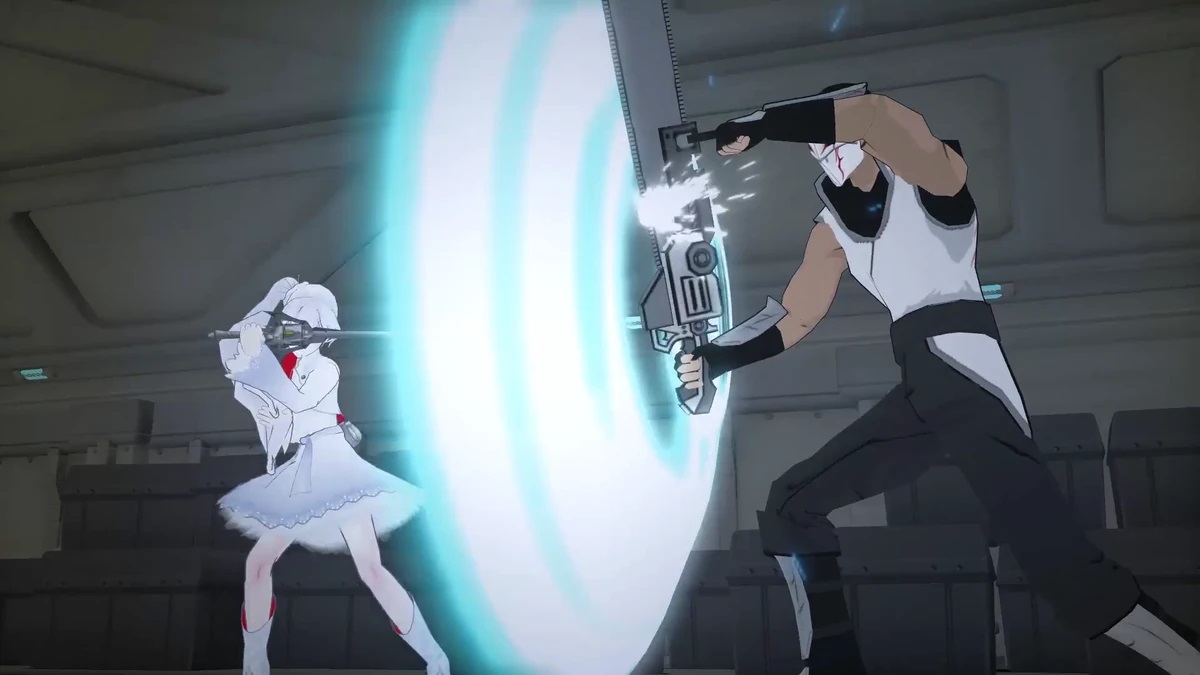 This was always the standout episode of Volume 2 so it’s almost odd to see it be so low but that’s just how stacked the volumes have been. We get the really iconic Yang vs Neo fight, Weiss vs the Buzzsaw guy, and Blake’s rematch with Torchwick. Throw in Raven’s first true appearance in the series and there’s a lot to love here. The fight choreography is absolutely on point and there are a lot of good tunes to check out here as well.

You also see how much Blake has improved since volume 1 and it’s a good bar to use as we can safely assume that the rest of the team also improved a lot since volume 1. Blake effortlessly crushes Torchwick here when of course she was getting demolished when they first fought. Of course part of that is also due to the elemental dust that Weiss supplied Blake with. So you could say the matchup would have been tougher but Blake still would have won based on what we saw here. Yang and Weiss losing their fights was a nice twist because after you saw Blake win hers you would have assumed that they’d all win. That was handled really well and the ending really establishes a lot of danger for the final episode. 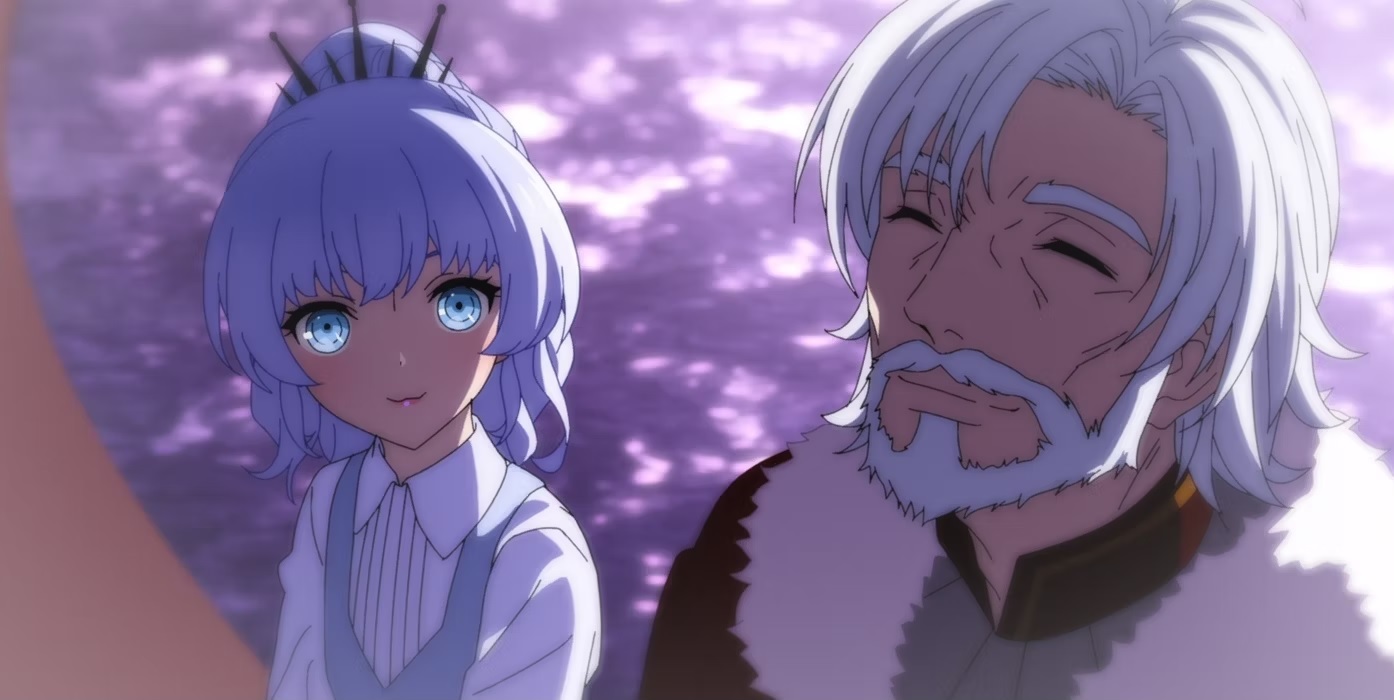 This was quite possibly Ice Queendom’s best episode in the batch. We finally get to see the team fight as a unit on more than one occasion which was really satisfying. The ost was top tier as you’d expect and they really saved up a lot of the budget for this episode. It was an excellent way to wrap up the arc and we got to see how strong Blake would be with the power of Adam. It all goes by really quickly with nonstop action so I had no issues with the episode. It’s just a lot of fun and I always enjoy team fights like this. I hope to see more and more combos from the team in the future. 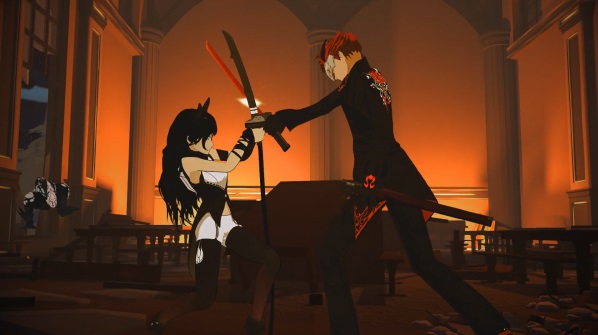 A bit low for Volume 3 standards but that’s just how strong these other episodes are. We get to continue the villains’ onslaught against the heroes. Every time the heroes get some kind of win (Ruby taking back the skies) the villains take another counter like Adam taking down Yang or the maiden being taken out by Cinder. It all really helps solidify the stakes here because the villains actually have backup plans as well. Usually when the tides start changing for the heroes it stays like that but the villains absolutely refuse to let the heroes get too much momentum. It really makes things very interesting. To date Volume 3 still had the most dire situation for the heroes and it’ll be hard to top that. Part of what makes it so effective was how happy the first two seasons were so when the tone started to shift you almost didn’t believe it. If you didn’t before now, then this would certainly convince you as the body count is rising and characters are receiving permanent injuries. 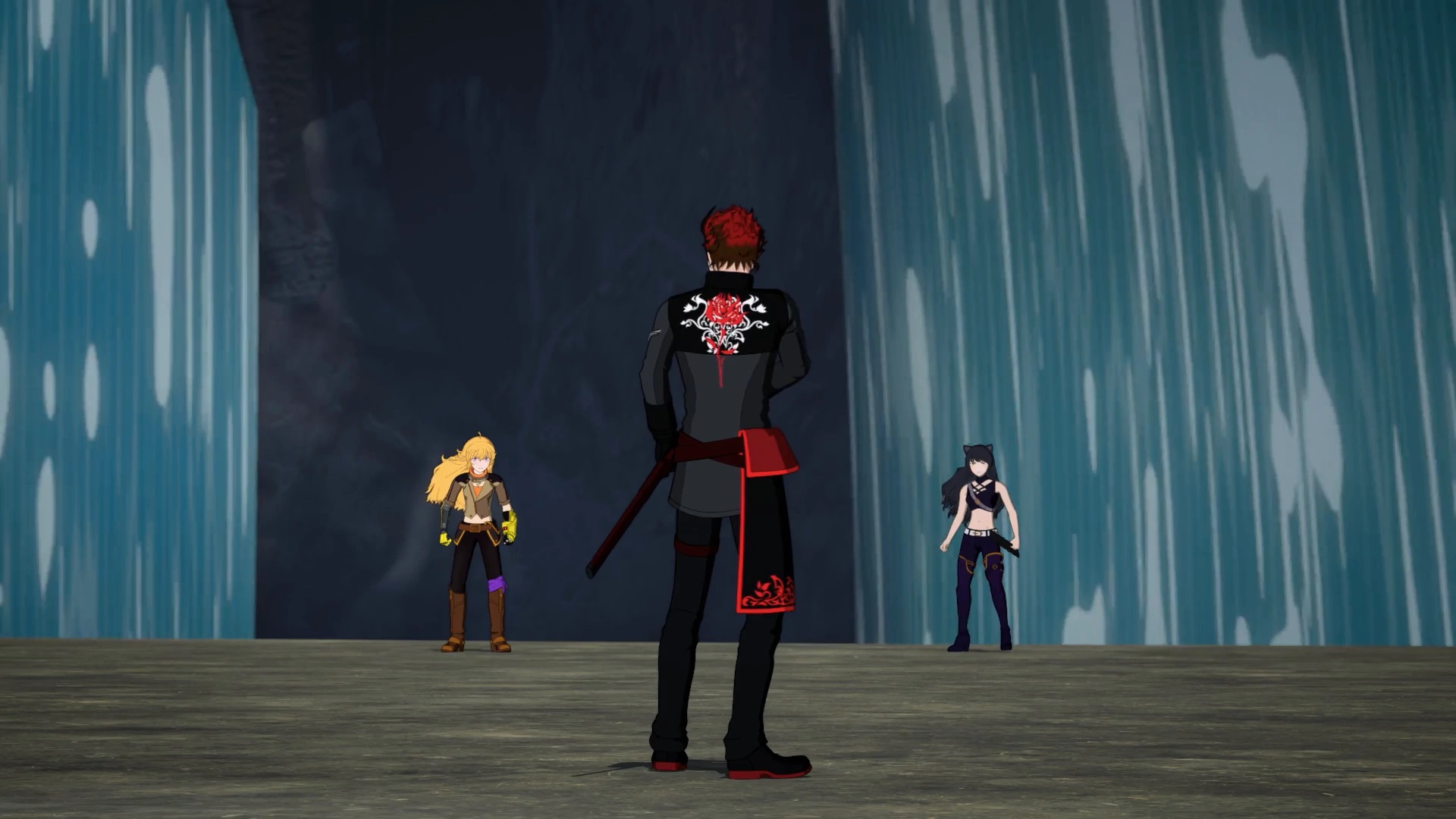 With Adam’s big return it was no surprise that this episode would rank really high. The giant mech fight against Team RWBY is cool as well of course but that would not have been enough to get it a really high score. No what got this one way high up was the big battle with Adam and Blake. Then they even squeezed in the fight between Yang and Adam, at least the first chunk of it. I remember watching this one so many times when it came out. I had been waiting for this rematch for years and it was finally here. The fighting is top tier and the story/dialogue is hype to the max. This is RWBY at its best and the kind of episode you could easily recommend to someone who is on the fence about watching it. There is just so much tension here and it never lets up. 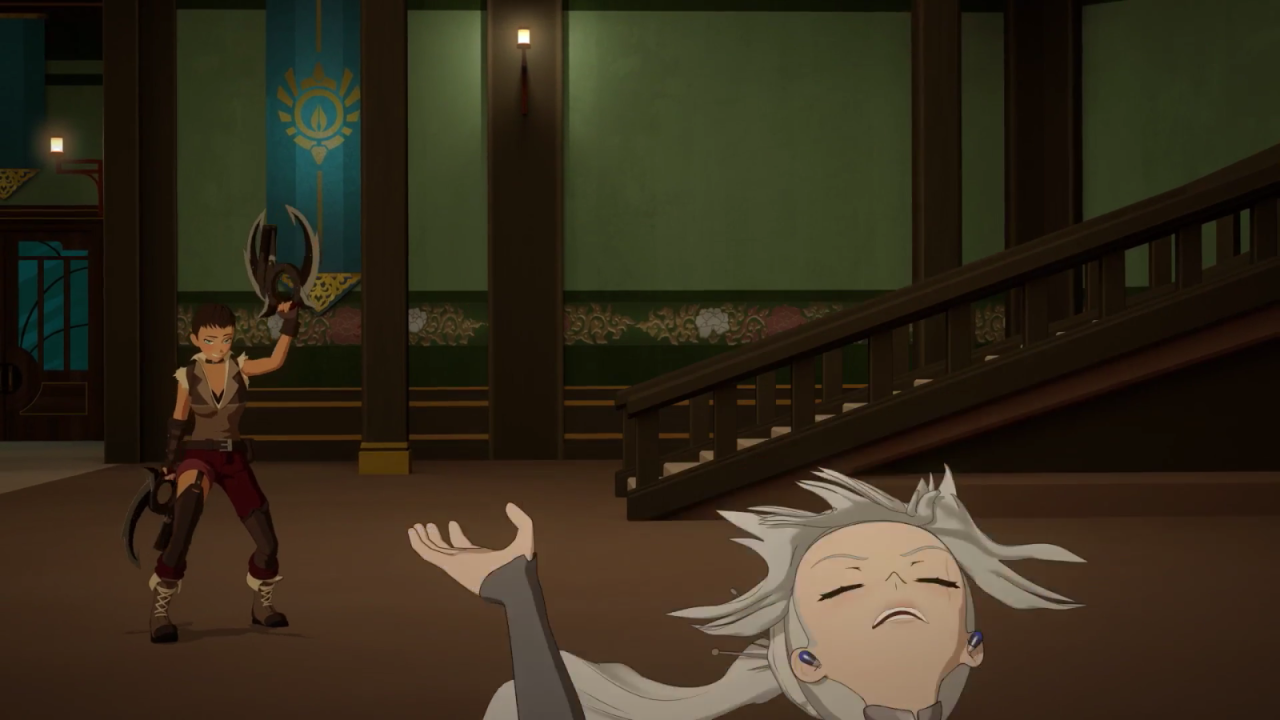 For a very long time this was my favorite episode in the history of RWBY. It did mean that my disappointment was much greater the next week due to the budget being cut a bit which led to next week’s fights not being as great as they should have been, but the set up here is perfect. Honestly if they ever wanted to redo this episode and the next one with updated fight scenes I’d be all up for it. Every big hero and villain across the series is showing up for a big battle. All of the rematches from Volume 3 are here and of course Team RWBY (Minus Blake but she’s on the way) is back together. This is what you would have been waiting for! The music is perfect and like in a fighting game every character gets some intro dialogue before their fight.

No expense was spared on the setup and this is the kind of episode that is only possible when you have years to build up the story elements. This is the big payoff and it absolutely delivers on that. So no matter what happens afterwards this will always be an all time episode for me. Weiss’ fight against Vernal is actually really solid too. The music was good and I’m fine with Weiss losing because it makes sense that she would have been out of practice. She wasn’t able to train or fight much at all since Volume 3 because she was locked up in Atlas. It’s almost like somebody picking up a game for the first time in a while and only remembering how to do the super attack. Weiss only trying to summon did look bad but I think writing it off as rust is perfectly valid. 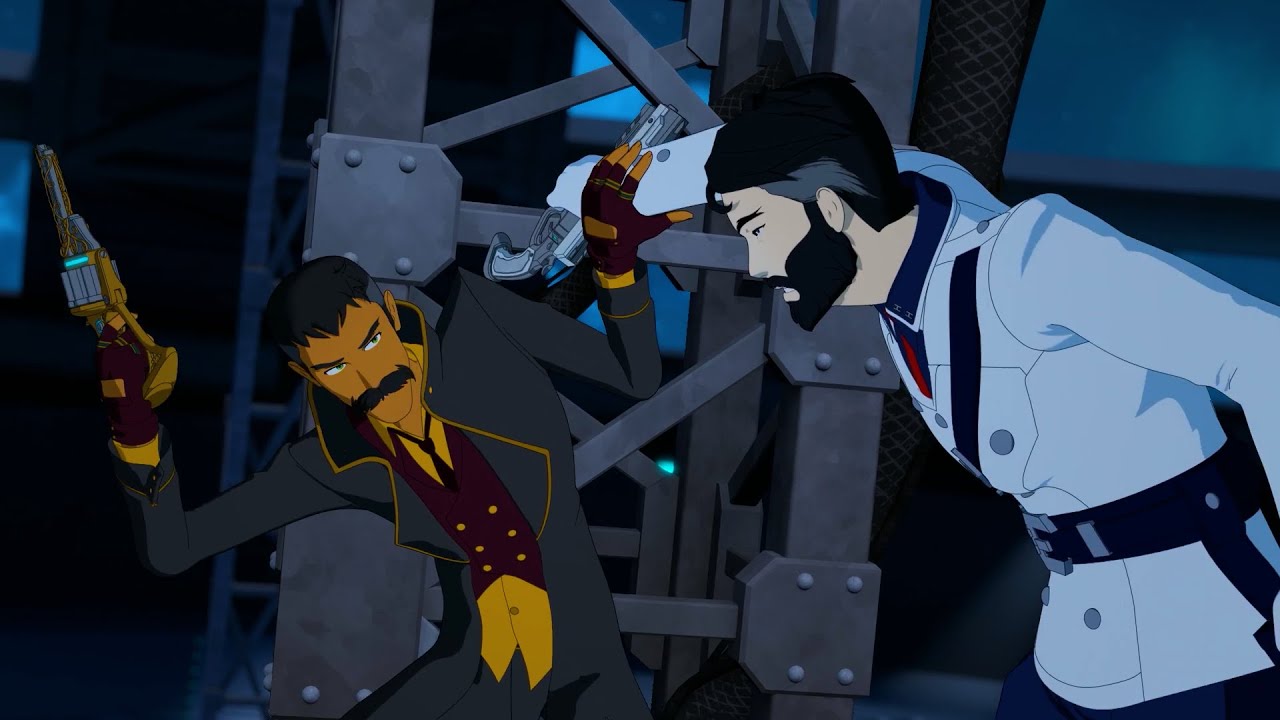 At the top is Volume 7 with a really outstanding episode once again. Ironwood’s fight against Watts was great. Not just in choreography and music but the story behind it. Ironwood is a character that the heroes have had doubts on for quite a while and I suspect the same would be true for the viewers. Well here he proves himself. There is nobody watching, nobody to impress but he puts his life on the line and takes this guy down. Ironwood even sacrifices his arm to do it and shows that he has the resolve to do whatever is necessary. Such commitment is always seen as an incredible trait for a hero and a very dangerous one for a villain.

Then we also have the villains making their move to scatter the heroes. Unfortunately Team RWBY made this easy with their deceptions that Ironwood found out about at the wrong time. The episode is so stacked that you almost overlook the Tyrian vs Qrow, Clover, and Robyn fight even though it’s great. That’s how much is going on here and it’s really impressive. The ending is certainly a turning point in the series because Ironwood and Ruby are finally at odds. Ironwood makes his first questionable call but Ruby has no real alternatives. It makes for a battle of wills and at the day it’s a difference that they can’t resolve. They are at two completely different positions and so fighting is the only way out of it. You understand the logic from both sides and how peace won’t win the day this time. Fantastic writing all around.

That concludes the episode 11s. Things are really heating up on every level now that’s for sure. It also means we are inching ever closer to the end of the series. With the next episode a few more volumes will drop out since they only had 12 and that means the future writeups are going to start getting smaller and smaller. Still that just means that the rankings will get even more intense as each volume tries to be the best!