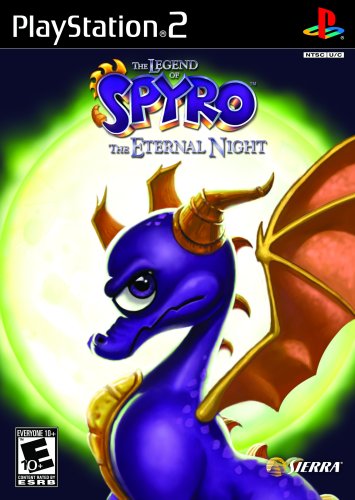 The Spyro trilogy continues with The Eternal Night. It’s been fun going through the Spyro journey and now I am one step closer to finishing up the whole series. This game gets surprisingly difficult to complete near the end as well. The bosses really pack a punch and most can take you out in a few blows. Fight with a lot of tactics and you’ll be okay though.

The game starts with Cynder being upset with herself for being the big villain in the first game so she runs off and then the kingdom is attacked by a bunch of apes. Even the dragon elders are no match for them so it’s time for Spyro to claim victory. He will need more power though and so that leads to him falling into the world of dreams to get all the elemental powers. Once he is at full strength then he will be able to save the world unless it is already too late. With some vague prophecies at work as well, Will Spyro be able to come out on top or is he in for a rough surprise?

In terms of gameplay this one is very similar to the last game. You still have your combo attacks and projectiles at the ready but this time the enemies won’t just watch as you get ready to fight. No these guys are going in hard now and I died many times during the game. They don’t have a lot of hit stun so when you attack you have to watch out for the immediate counter attack. If you play it wrong then you’re really going to be in a bad spot. What I would recommend is really putting your time slow to use. Yes, in this game you can manipulate time, causing it to slow down to a crawl. It’s really quite handy.

It’s not unlimited though and will take up your energy gauge really quick. Almost like a blink and you’ll miss it kind of speed. So you do have to keep that in mind but it’s still extremely handy. Try a lot of run and gun techniques. Slow down time so you land a combo and then just run out of there. Rinse and repeat until the enemy goes down. The game will walk you through all of the specific element attacks as well and you’ll get the hang of things the more you play the game. Just know that even once you are used to the gameplay style it will not be a walk in the park. This is the kind of game where you really need to work for your victories.

I’m not even sure I would have been able to beat the final boss if not for a glitch showing up at the perfect time to save me. The last boss was really fast and his attacks dished out a bunch of damage but then all of a sudden we were both trapped in a circle where I could hit him but he couldn’t hit me back. I was able to exploit this until he went down and let me tell you it was no easy feat! I had to press the attack button so many times that my thumb was exhausted but I can tell you that it was definitely worth it.

The game’s length is not too long but still ends up being decent. I want to say we had it beat in around 8 hours. That’s considering that I died a whole lot so if you end up being a whiz at this game then you could beat it sooner but I wouldn’t expect to get out of those levels without a scratch. There isn’t any replay value as beating the game takes you back to level 1 so this will all be about your story experience. Most of your deaths will be legit but there were a few times where I died due to some gameplay issues. There is like a 1 in 3 chance that your second jump won’t register in which case you will fall to your doom. It seemed to happen to me quite a bit. If you’re not perfect with the timing then you will sink like a rock so watch out for that.

In terms of the story I suppose this makes sense as the middle of the trilogy because not a lot happens compared to the first game. There are prophecies and a big cliffhanger to set up the third game but if the apes don’t come back then they were more like filler villains to buy time. It’s impressive how strong they were but I’d like the dragons to get some hype back. It seems like they lose to every invader and you’d expect these guys to be made of sterner stuff. Dragons are still supposed to be the strongest animal out there right?

We do get some more lore building on the purple dragons and Spyro himself gets a super form so that was pretty cool. I hope it ends up returning for the third game, that would be great since you don’t get to play as him a whole lot here. In theory he will really hit hard though and every platforming main character needs a super form at some point.

A nice quality of life feature here are the constant checkpoints. When you make a game that’s really hard then it is imperative that you have a lot of checkpoints so you are never thrown too far back into the past. It can be very tragic to have to play the same parts over and over again when these aren’t present. You can also skip cutscenes which is great. You do usually have to watch a few seconds so the skip can load but I’ll take it.

For the most part the soundtrack is more on the forgettable side but the end credits theme was great. It was super emotional and I can’t say that I was really expecting that. It’s a song that has aged really well and it’ll be tough for any Spyro track to top that one. Still if any could do it, it would be the third game as we get the big climax to the saga. Little did people realize that the Spyro series would basically end there.

Overall, Spyro: The Eternal Night is a very solid platformer. Perhaps the devs grew tired of everyone talking about Crash was so much harder so they decided that this time they would get the last laugh. Even if you don’t normally play Spyro, I’d recommend this game to anyone who wants to really test their platforming chops. It’s not easy to make a 3D platformer difficult, particularly one where you can slow down time. Your reaction times will be tested extensively and you feel a great sense of accomplishment when you beat this game. It’s all executed well so you won’t be frustrated even when you lose. No matter how many times it may take, you will be ready!