So this is it, we’ve made it to the finales for each volume. It’s been a fun ride but now we can see once and for all which volume ended in the best way. It’s going to be a battle for the ages and it’s nice to see all of the volumes back in action for this one. I’ve already done the breakdown for most of them so I’ll probably keep it short on the reruns. 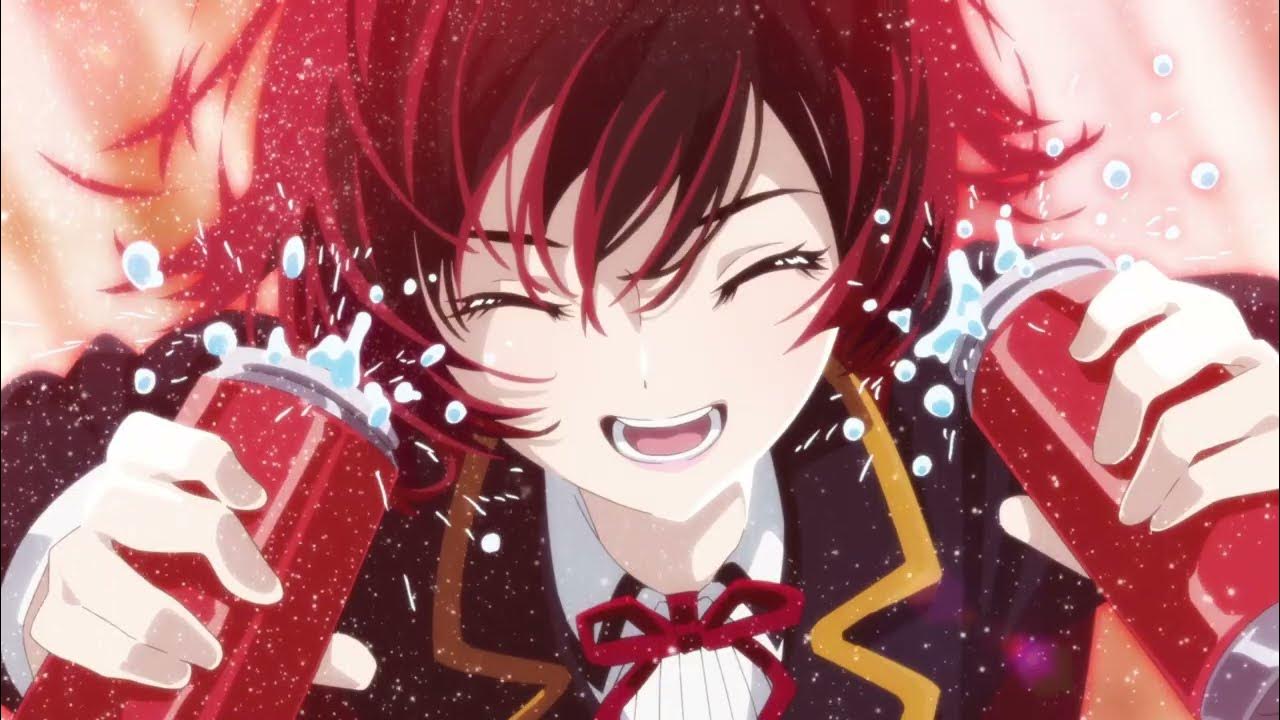 Ice Queendom had a lot of big fights and action towards the end but the final episode is more of an aftermath which puts it at a considerable disadvantage here. It just doesn’t quite have the fight scenes needed to get a higher spot. The food fight was cool but it was more stylistic than actually combat based like in volume 2. It was a great way to cap off the journey regardless though and I hope we get a season 2 at some point because there are lots of other adventures to be told here. We can’t just let it end like this. 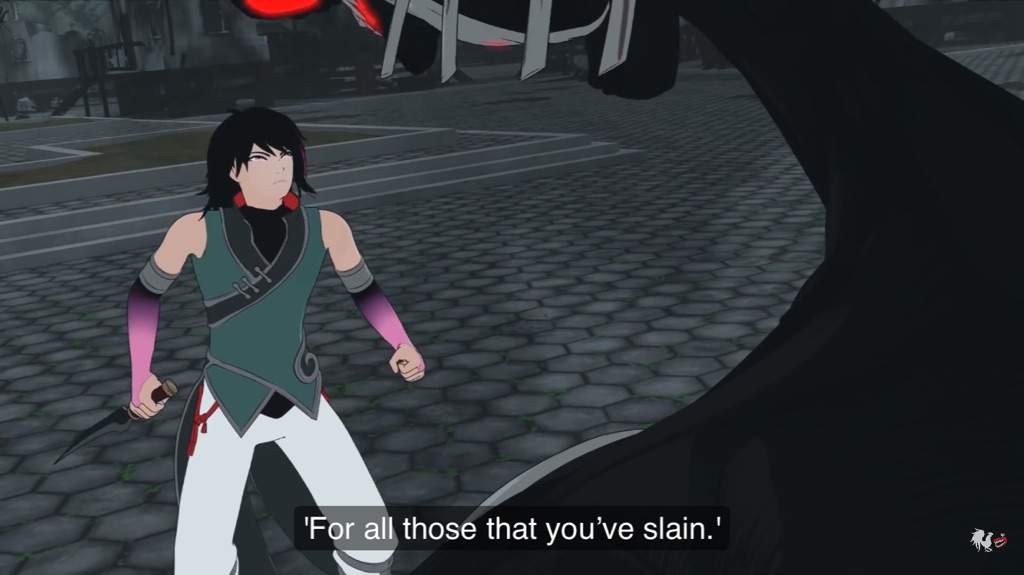 Volume 4 ended off with the big fight against the Grimm that took out Ren’s village so it was definitely personal. It was a good fight that used a lot of strategy up but this was when they were still finding their footing with the new animation engine and so it couldn’t quite keep up with the newer fights. You also never felt like the heroes were in much danger from a Grimm no matter how big and strong he was. They still had the speed advantage the whole time and sheer numbers. Ending off with finally getting sent over to Haven was good as it felt like the journey was complete. Volume 4 may have had a lot of exposition but it was still a very complete adventure. 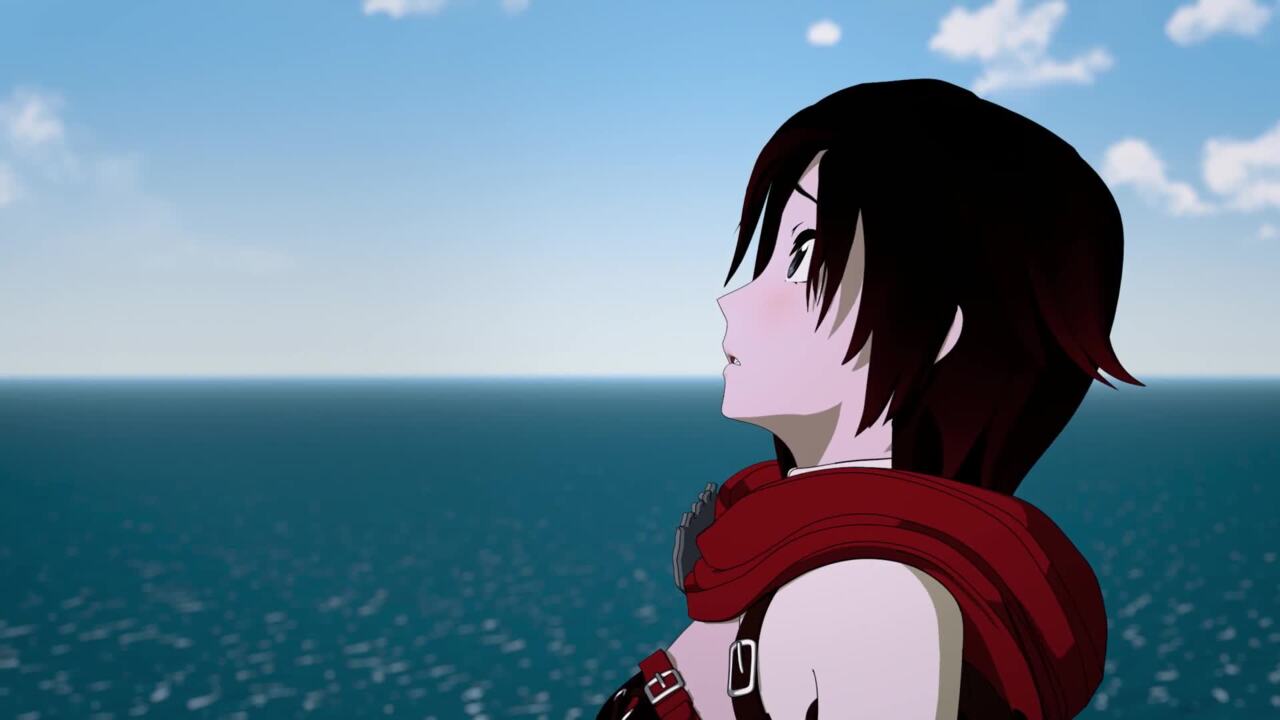 Volume 6 would have been higher if this was just one episode earlier with the Adam fight. Ending with the giant mech wasn’t quite as intense although I know it was fairly strong. Getting Ruby to finally master using her eyes was definitely her biggest achievement here and the song was a lot of fun. It’s still a very climactic way to end things off and 6 was a really fun volume. The finale may be a little low in the ranks but ultimately it still puts up a good fight all the way around. It was great seeing all of the heroes team up again like the good ole days. Going forward the team would finally be united instead of being split apart. 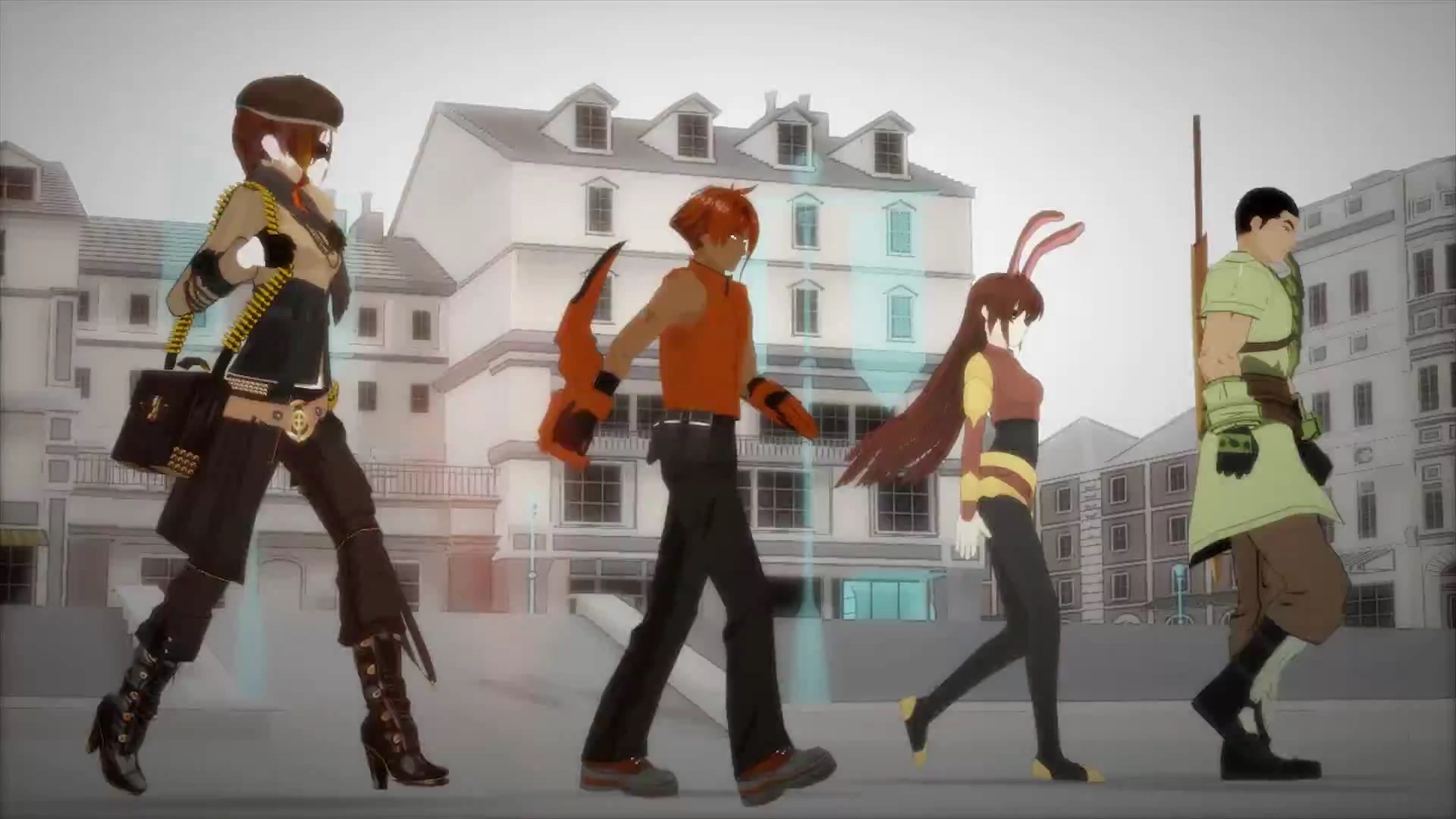 Volume 2 allows us to see a bunch of characters all fighting off an invasion which was cool. We saw how the students would step up as needed to protect the city. None of the individual fights may have ever had the heroes in danger here but the fight itself is still rather large scale. When Coco shows up she certainly makes a splash in the power levels with how she downs so many Nevermores with a single strike. Her machine gun is really quite impressive, there aren’t almost any weapons that could keep up with that. Surprisingly Team RWBY doesn’t get quite as much to do since this is a showcase for the other characters but they’re still taking down a lot of Grimm in the background. Deep down you figure RWBY could have solo’d the invasion eventually. 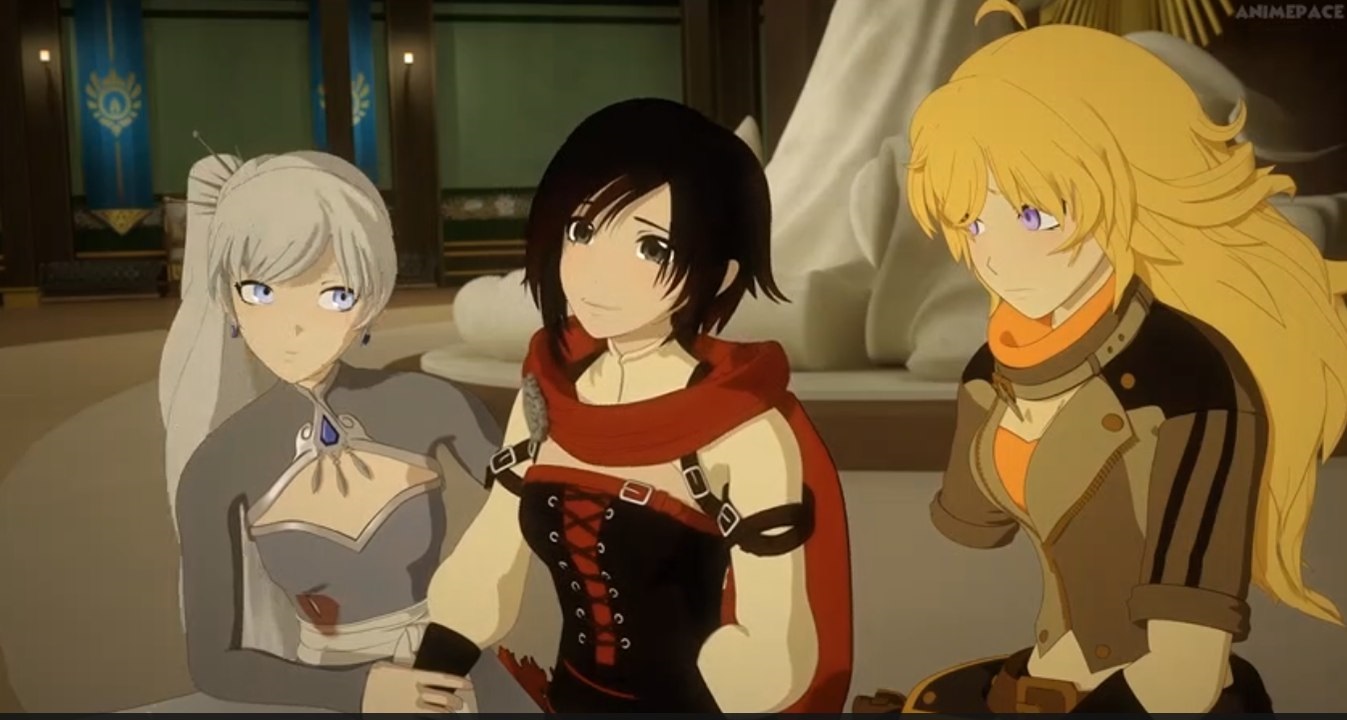 Volume 5 closes out the big battle with Hazel here as the heroes gain the upper hand. Unfortunately almost all of the fight is off screen. We get a nice conversation with Yang and Raven though. Yang may have been pressing her luck a whole lot there but at the end of the day Raven isn’t so evil that she would destroy her own daughter here. Raven’s definitely a villain and one who has made the wrong calls over the years but she has also done a great job of surviving. You probably want to have her on your side at the end of the day. It was also nice to see Adam a bit as always although unfortunately I wouldn’t say that he was super impressive here. I suppose he stalled Sun for a second or two but is that really something that’s big enough to really praise like that? His dialogue is always top tier though.

I always have some issues with the volume’s climax and how things were handled but at the end of the day it’s still fairly high up in the ranks because the story is just that good. You are super invested in what is going to happen next and that is absolutely a very impressive thing to be proud of. Not every title could say the same. 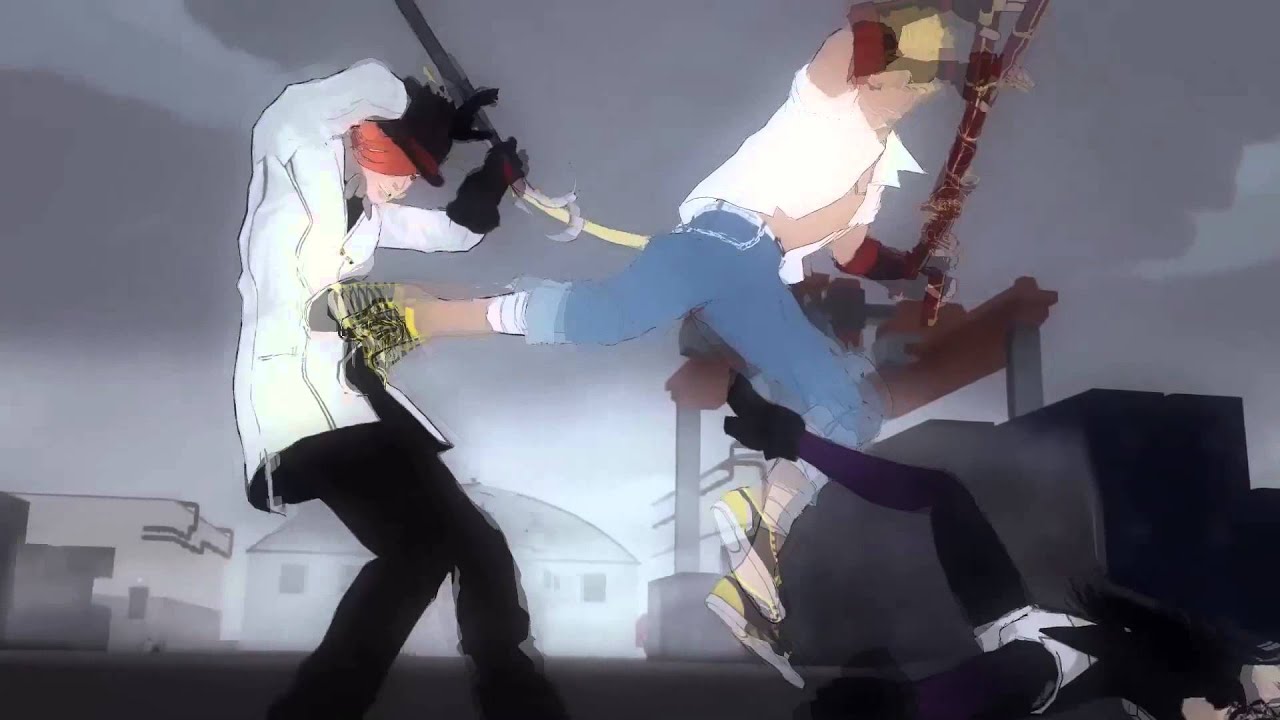 The original volume is here at last! Ending things with a solid Blake vs Torchwick battle was great and of course we got to see Sun fighting a bit. This was the best fight of the first volume and the final episode ended things on a high note as you would expect. I also liked that Torchwick could actually fight a whole lot. He isn’t just someone in the shadows who gives orders but someone who could go out there and dish out the pain as needed. The episode may be shorter than the average finale but there was no shortage of action and it’s super nostalgic. This one absolutely earns its place near the top for those reasons. 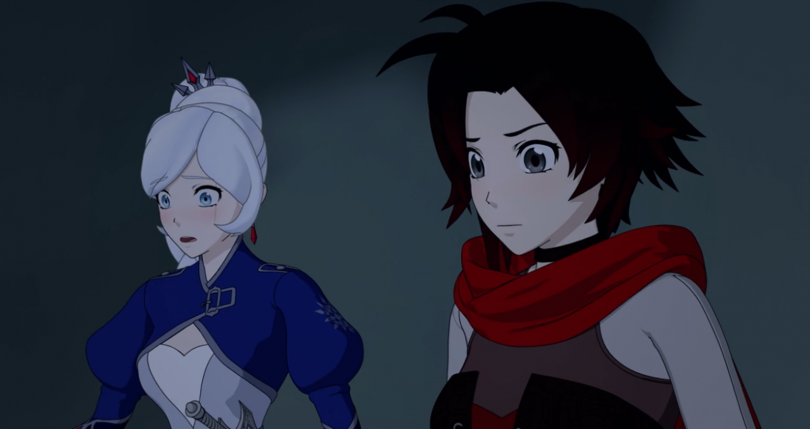 We get our next big maiden moment here as Cinder goes up against the dying winter maiden and Penny gets the powers for a bit. It’s a solid way to end the volume and I liked that Ruby was ready to use her silver eyes right away. With the heroes no longer on the same page as Ironwood and the Ace Ops it really made you realize that the future was only going to get a lot harder for them on all sides. The episode also had a really dynamite ending song to show just how fierce the villains were looking. Cinder has had her share of losses over the years so this was a great way to get her back in the mix as a top threat. Even without using her maiden powers all that much she was overwhelming Winter who is one of the most skilled fighters here. 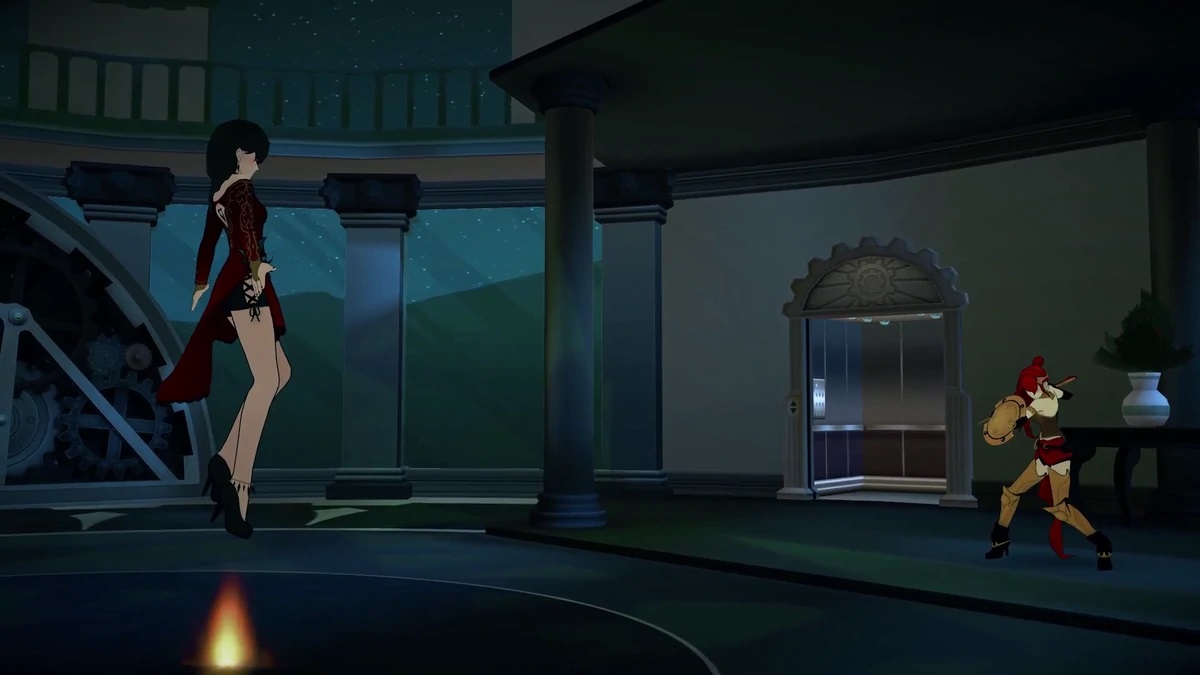 Volume 3’s finale is really iconic. I’ve seen it many times as the ultimate ending to my favorite volume. Seeing Pyrrha go up to the roof to fight Cinder even though she was outmatched was excellent. It really showed how she had a hero’s drive through and through. Nobody was going to stop her from doing her best to try and stop the incoming threat. We got to see all of the students band together here and the ending felt like a true ending to the original saga. This was the turning point for the series to really become very story based. Throw in the ending with Salem’s true reveal and the amount of hype here just could not be contained. 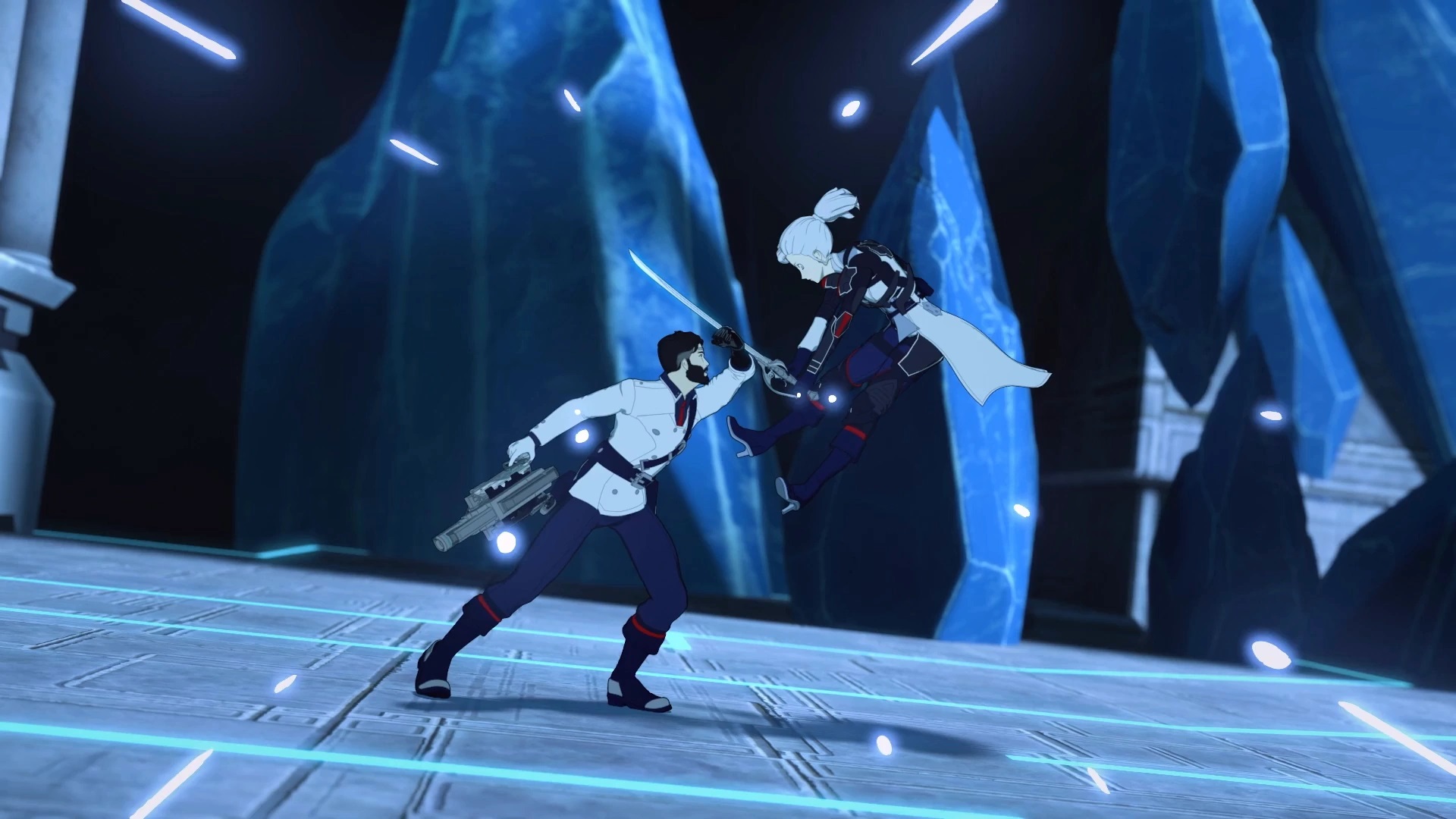 Isn’t it fitting that Volume 8 should win this round? The series really ended things off on the highest note imaginable and it’s why the wait for Volume 9 has felt so long. It’s going to be hard for 9 to top this one but we’ll see how that goes. Cinder takes on basically the entire cast in this episode and we really see just how far she has come along. I have major issues with Jaune taking out Penny though. It was the wrong call then and it’s still the wrong call now. He has to be able to find another way and just say no in that situation. Then of course we have the Ironwood vs Winter fight with a lot of spectacular dialogue the whole time. You can feel how frustrated Ironwood is the whole time with everything caving in around him. It would have been cool if he fired one shot to take down Cinder though. It wouldn’t have worked but I’d have liked the attempt.

There was a ton of drama and intensity here all the way through. Not only is it the best season finale but it’s one of the best episodes in all of RWBY. I’ve seen the fights here so many times since it came out. The music, the animation, it’s all flawless. This is exactly why you would have picked up the series in the first place. Volume 8 capitalizes on everything that you could ever need.

So there you go, we’ve now ranked the episodes from each volume for each episode number. It was quite the journey but no worries, RWBY will continue! Expect a post soon taking the average scores for each Volume so we can truly see how each one ranked. I’ve always said that Volume 3 is the best volume, but will the numbers support this or have I been underestimating one of them? Either way it’ll be fun to check that out and see how this goes. See you next time!