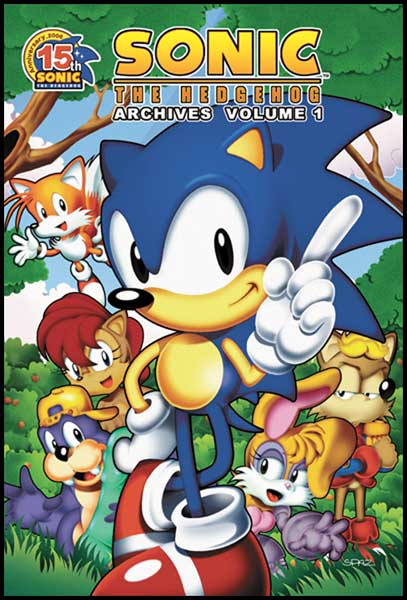 I’ve read a lot of the newer Sonic comics, but I’ll admit that I have not really experienced most of the classic ones. The first volume of the archives is a good start since it brings some of the first Sonic comics that were ever written! It’s an interesting change of pace from the modern issues and you can definitely tell that things have changed. Luckily, these issues still hold up pretty well.

Giving you a plot summary can be a little tricky though. It’s not as if these stories really had a whole lot of continuity back in the day and they’re all self contained stories. They are also really short stories. One of them features a battle between Super Sonic and the Universalmander, which was pretty cool. I can’t say that I expected to see any of them so early. Another story has Eggman hire a pretty powerful monkey with explosive coconuts to take out Sonic and the Freedom Fighters once and for all.

Sonic is as cool as you would expect. He’s always got a good pun at the ready and he doesn’t mind breaking the fourth wall when necessary. He’s ultimately confident and his personality actually hasn’t changed all that much when compared to the newest issues. He doesn’t have to worry about a lot of different dramas and side quests so he’s totally devoted to showing off and using his super speed to mess with Eggman. This is how you write a main character!

The Universalmander is probably the strongest enemy that Sonic has ever faced up to now. Sonic still defeated him with incredible ease as he just jumped right through the poor guy, but we can’t forget that Sonic did need to use the power of the Chaos Emeralds first. I don’t believe that anyone will give Sonic a real run for his money for a while, so this was good enough for this fighter. You gotta love the name though!

One of the enemies had explosive coconuts, but there isn’t much to say about him. I remember him from the games and even Sonic DX has a variation of this opponent. Throwing things is cool…but not very effective against an opponent as fast as Sonic. The other Freedom Fighters don’t get much of a role yet. Antoine is already starting to feel sorry for himself because the other never ask for his advice. (Little does he know that they always try, but he’s too lost in his thoughts to hear them) Sally is already the tactician of the group, but the plans are all fairly basic since Sonic likes to be direct. She’s not really a fighter yet. Tails is still in the kid phase. He doesn’t really seem to understand what’s happening and everything is a game to him. He gets the heroes into a pretty dicey spot by mistake. (And he gets mad at Sonic in 100 issues for treating him like a child!) I’m definitely glad that Sega severely changed his design later on since the brown just didn’t work for him.

Eggman is the main villain of course and he’s pretty solid. It was cool to see him literally feed his minions to the scrapper. This guy isn’t playing around. Naturally, Eggman mostly takes the brunt of every joke, but he takes them in stride. His minions always comment on his round shape, but he ignored them and just goes about his business. Of course, he did destroy some of his minions so I guess the insults may play a part in that. I’m don’t care for any of Eggman’s minions at this point so it’s good to see Eggman thinning out the ranks. He does get a good shot on Sonic when he throws him around through the pinball machine. Even then, Sonic is too busy making puns to really be in any danger, but at least the mad doctor got his kicks. This was definitely how his comic relief era started and I’m happy to say that it works better for him than his rivals in Wily and Bowser.

It’s pretty cool to see how the comics have changed. This same series is still going on today as the series nears its 300th issue. (In about 30 issues) These were definitely simpler days for the heroes and we don’t have any extra hedgehogs. I’m sure that Metal Sonic and the others join the crew soon, but the issues are still fun. There really isn’t a lot of action in it, but this one is really more of a fun comedy. Breaking the fourth wall becomes pretty regular after a while and the characters continue to trade insults and puns.

The art is a little rough around the edges, but it’s still pretty good. The attention to the details can really make some scenes have an extra punch and the action scenes that we do get are pretty great. Just one look at Sonic’s speed is enough to make you feel a little bad for the villains. They really don’t stand a chance at all.

Overall, This is a solid start to the Sonic comics. I doubt that the writers could have ever dreamed that it would get so popular. Archie has done a great job with Sonic throughout the years. This collection may not be quite as intriguing as the new Sonic Universe and Saga collections, but every good franchise must start from somewhere. The issues definitely hold up from the good ole days. They are more comedy based so that could be a turn off for some, but the humor is very well done. The collection is also very short so you are able to go through it rather quickly. I imagine that you can currently buy it for a very low price and it’s worth it. You can proudly say that you own the very first Sonic comic that started the epic comic franchise that we see today. It’ll be fun to see if the change to the modern times is very sudden or so subtle that I won’t even notice. We shall see!