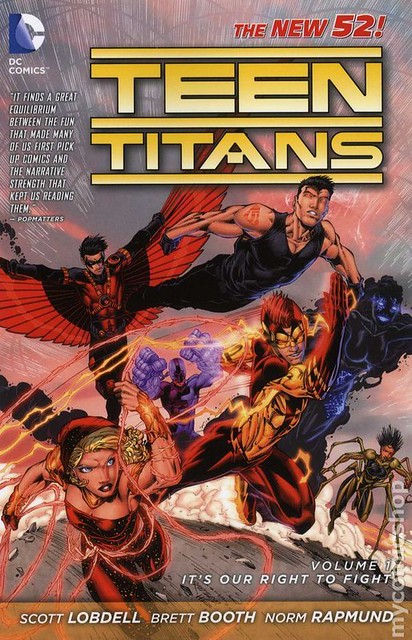 It’s time to look at the start of the New 52 Teen Titans run. I always thought the comics looked like fun with the dynamic covers and the cool new costumes. I can imagine how it may be a little too flashy for some readers, but it helped capture what the New 52 was supposed to be all about. The only thing that I was a little wary about is the fact that one of the main characters is gay and I believe that it may become a bit more of a focus in the future, but hopefully it simply remains a background element that doesn’t come into play. This comic series doesn’t need any romance of any kind. Simply focus on the action and this title should stay solid.

Red Robin/Tim Drake finds out that teenage meta humans are being targeted and kidnapped by an organization known as NOWHERE. He has written many blog posts to warn fellow heroes about this, but decides that he’ll finally have to step in to save them. He dons the Red Robin costume and finds Wonder Girl first. The two of them fight off the agents and Red Robin decides that he’ll save everyone else in the same way. Unfortunately, the two of them do not get along very well and the other members like Kid Flash, Bunker, Skitter, Solstice, and Danny are all not used to being on a team. Red Robin has his work cut out for them as the team ends the graphic novel embarking on their first big mission. They need to save Superboy!

There’s a lot of action in this first graphic novel. Superboy gets to fight the whole group of Teen Titans as he works for NOWHERE in this continuity. I suppose that they built him or that there will be a plot twist about that at some point. As with other modern day trades there are some events that happen in other issues so you won’t fully see them here. After all, Superboy already had his own comic series at the time so the timing must have been interesting. (Granted, the same thing happened in Civil War as well) You can still understand everything that is happening with no extra effort though. The best part of this comic was certainly the battle with Superboy.

As it stands, Superboy completely outclasses the Teen Titans in a fight though. This isn’t exactly evenly matched after all. Superboy is the strongest member around and since he has telekinesis at his disposal, he can even stop Kid Flash. I’ll still take classic Super Strength and speed like Superman any day, but it is always handy to have an extra power. Superboy seems like a reasonable guy even if he isn’t thinking things through a whole lot. It’s obvious that NOWHERE is suspect and even if his mission is to serve them, he should think about what kind of reception he’ll get for failing his mission. That was a good hero move on his part though.

The art is really good and continues to show why DC is leading the industry in this area. It holds its own as well as any other comic on the shelf and that is especially true for the action scenes and character designs. It’s been a long time since Red Robin was such a starring member so it’s good to see that his new design is so sharp. I imagine that Kid Flash’s is the one that people would find too colorful, but it works well for the character.

Unfortunately, the writing is what I’d call the weak point of the comic. The dialogue between Red Robin and Wonder Girl in particular can be a little sad as both of them really try your patience. A line should always be cool sounding or at least it should push the plot along. Some of the conversations that they have are just filler and usually it is just Wonder Girl accusing Red Robin of being a creep. He doesn’t seem to deny it typically so that doesn’t bode well for him at all. Even the conversation leading up to Bunko’s big revelation is rather forced as well. Characters don’t need to be talking about flirting all of the time!

Anyway, as you’d expect I didn’t think too highly of Red Robin. It’s unfortunate since I do like the Robins quite a bit, but he had too many iffy moments. Red Robin tends to look good when he’s on his own taking down criminals and making deductions, but he’ll have to work on himself when he’s with the team. I’m sure that he’ll gradually get used to being a team player. As it is, he also makes a very questionable call at the end of the comic which I naturally disagree with. He lets other meta humans get hunted and injured just so he can have some more proof. Definitely a bad call.

Wonder Girl plays up the “tough girl” angle a little too much most of the time, but granted I can see why she is always annoyed at Red Robin. He constantly calls her Wonder Girl even though she doesn’t want to be called that. She is not as eager to fight as Wonder Woman, but still seems to get a thrill out of it so that’s always a good personality trait. She’s easily the strongest member of the team, but not quite as Superboy’s level yet. Her dialogue needs to get better for her to be more likable, but she’s still better than Red Robin, Bunko, and Skitter.

Skitter has very weak will power. She lets her animal form take control rather easily and comes across as a self-defeating person the entire time. She definitely needs to work on getting a little more confident. Her Skitter form has a cool design and seems to be decently strong so she should grow into a being a good character. She just needs more will power and confidence is a good way to increase that quality. Bunko was a fan of Red Robin from the start so he’s one of the only members who is really glad to be on the team. His telekinetic powers will surely be useful as the fights go on. That being said, his costume is a complete rip off from Iron Fist’s. DC didn’t even try to give him something original. Right now he is a rather bland character, but at least he is optimistic which is more than I can say for some of the others. Danny has no role as of yet and he’s a living street. That’s got to be one of the worst powers of all time. I hope it doesn’t hurt when people step on him. There’s really nothing to say about him at the moment though there may never be since it seems like he’ll never take human form. I suppose having enough written lines as an object could still give him a personality…maybe.

Solstice has mysterious dark powers so it’s good that Raven’s not on the team yet. She seems fairly powerful, but we haven’t really gotten to see her fight yet. Energy Projection and flight is a good start though. She is the only one to realize that Red Robin is up to something iffy and she is also very optimistic. Solstice is definitely off to a solid start as one of the best members, maybe even the best. Kid Flash acts as you would expect him too. He has great speed and it naturally goes to his head. The concept of a backdraft following him into a burning house makes sense even if it feels like he just had some bad luck there. I could swear that the Flash has done the same thing many times with no ill side effects. Kid Flash will be integral to the plot as time travelling shenanigans are already starting and Kid Flash may not be what he seems. It’ll be sort of neat to see his true story, but it’s not interesting enough to warrant a full comic flashback so hopefully it just gets a few panels. His blue costume seems neat though.

The comic ends with a fairly great cliffhanger as the founder of NOWHERE shows up to fight the full team along with an injured Superboy. That should make for a solid fight even if this guy seems completely outclassed. His Grim Reaper design is another great one and the New 52 has done a good job creating original villains. His powers seem shadow based and those are usually difficult to fight against. I look forward to seeing what he has got in the next volume.

Overall, This was a solid comic. It ends up being just shy of the 8 due to the weak writing at times, but still makes for a fun read. It’s a good start to the Teen Titans adventures. The roster is also surprisingly strong as Kid Flash, Wonder Girl, and Superboy are all power hitters with Solstice and Bunker being decent in combat as well. It’ll be interesting to see which villains are pitted against this group as it will be tough to stop them. After enough issues, I naturally want to see the Justice League fight the Teen Titans. It should be a blowout, but just the concept of a crossover fight is always fun. On an ending note, I’d also like to point out that the group fight against Superboy is exactly how all team comics should begin.