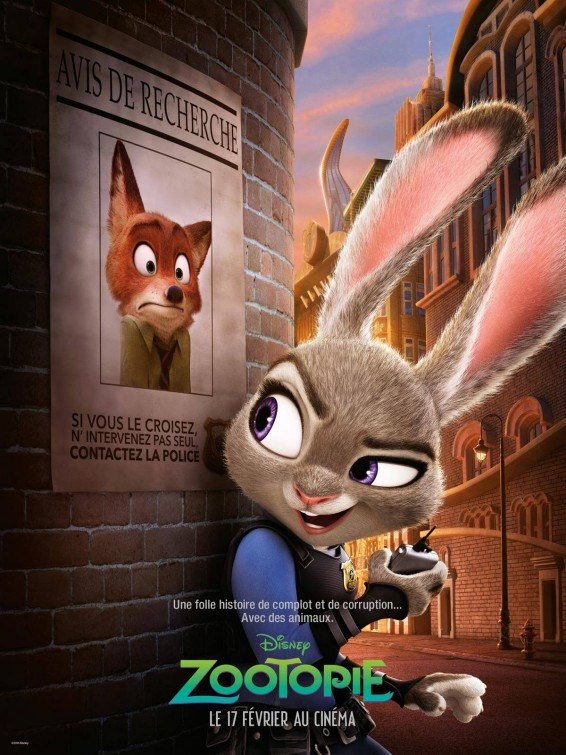 Lately, the theatrical animated films have been pretty solid. Big Hero 6, Frozen, and more gems have been popping up. Zootopia is another good addition to these ranks and it is actually more fun than those. It’s hard to call it a better film as I’ve still always thought of Frozen as being better, but it is getting a higher score so maybe it just is better and I’m finally realizing that. It’s all subject to change of course, but as of now things are looking good for Zootopia.

Judy is a bunny who wants to be a cop, but everyone has always doubted her skills because she is so small compared to the rest of the cadets. Society feels like she is ill equipped for the task and her parents agree as they try to get her to settle for something a little safer. Judy decides that she still wants to go after her dreams though and heads to the big city. She is just in time for a new conspiracy as the meat eaters have suddenly started going back to their primal roots. Her partner is a fox and this causes a rift between them. Can Judy find out who is framing these animals or is it really their DNA just running wild? Only she can crack the case!

Zootopia deals with a lot of themes about defying society’s expectations and not letting it limit you. People can try to tell you what you can or can’t do based on their judgments on your abilities, but if you work hard you will often find that you are better equipped to handle the situation than you may have thought. It’s all about determination and trying your best. It also shows why you shouldn’t use first impressions and hearsay to judge people. The residents of Zootopia heavily believe in stereotypes which causes a lot of friction in the city. Judy does her best to break those boundries and it is something that the real world still has a lot of trouble with as well. The message is handled well here even if there is one subplot that doesn’t make a lot of sense. More on that in a little bit.

Judy is a great main character and there are really no flaws to be found with her. She stands up to the bullies even if she doesn’t always wins and does her best to be a great cop. She leaps at the chance to help crack the case and rarely lets herself get down. I liked how tough she was and how she was able to talk back to Nick a lot of the time. He’s a fast talker who uses her naivete against her, but Judy’s very intelligent and quickly learns how to counter such word play. One of the better scenes was when she threw the recorder over a fence to trick Nick into following it as she took a short cut. Moments like that helped to add an extra layer to her character. She’s a nice person, but also knows how to realistically deal with the shadier element. Her good deeds also come back to help her out at the end like her partnership with the gang boss.

Nick’s a great sidekick to have and I’d actually say that he is even better than Judy. Judy is excellent as I just pointed out, but Nick’s just as great. I love his personality as he is very snappy and has a fast method of speaking that allows him to make a lot of good points and solid burns. He had to grow up with his share of difficulties as well and responded to them by creating this tough exterior. When he sees how Judy treats him like an equal and isn’t afraid despite him being a fox, they quickly become close friends. They make a good team due to how different they are and their strengths compliment each other. All good buddy cop films need to have two good main characters and Nick completes the puzzle here. He’s not quite as super heroic as Judy, but you can count on him in a pinch.

All right, it’s time to mention the subplot that was a little forced and came out of nowhere. After a few meat eaters start turning violent, the media asks Judy for a statement on the matter. She then starts to talk about how it may be in their DNA and they are just turning savage because they can’t help it. She was simply parroting what she had heard from others and it was meant to look like she just didn’t know any better, but I can’t buy that. While she may have been a little naive, she was very intelligent as well and part of her whole character arc was how she was standing against these stereotypes. From the start she had been defying them even though everyone tried to push this onto her. This complete character reversal was out of character and only existed so that she could have a disagreement with Nick. Considering how quickly the two of them became partners again, I think the film could have just completely skipped this. It was essentially filler and the quick time skip along with Judy recovering to the farm could have been cut out as well.

Of course, having a good supporting cast is important for a film as well. Zootopia’s got you covered on that account. Judy’s parents were both fairly charismatic and fun to have around. They meant well, but kept making the situation a lot worse anyway by doubting Judy’s skills and trying to get her to just be a normal farmer. Their scenes were all pretty rich. Chief Bogo was only all right though. As with the Mayor, he felt a little too antagonistic for me to buy them acting a little more noble at the end. They certainly enjoy being in positions of power, but haven’t really earned it. The Mayor was better than Bogo though as he was more over the top and at least leapt into his role as a villain with open arms.

Dawn was certainly handy to have around as she did her best to help Judy out whenever the character was in a pinch. She gets pushed around by the Mayor quite a bit, but doesn’t let it get her down. Nothing gets her down as she always has a plan in mind. She’s a fairly deep character whose goals and motivations make sense. While his role is not quite as big, Flash was also a scene stealer. He is a sloth who works at a job involving a lot of typing so you can imagine how long that will take. The film does a good job of making him comically slow while not overplaying the joke. It happens just enough to stay funny while milking the joke as much as possible. The final scene with Flash was the perfect way to end it as well. A sequel would need to be careful not to overuse him, but with moderation, he is definitely a must have!

Mr. Big was a fun gangster to have as well. The trope of the big villain actually being tiny is a bit overused, but he was a decent villain to have. He certainly has loyalty for his friends with is good and he was also pretty crucial by the end. Most of the characters had their roles to play by the end and the film did a really good job of balancing this all together.

Zootopia never drags and it is a lot of fun from start to finish. The fundamentals are strong throughout and that’s what really makes a good film. The writing is definitely on point and it has to be to make a film like this one really good. Bad writing would completely shred it since the whole film revolves around that. There isn’t much of a soundtrack unfortunately, but I guess that would have been a little too good to be true. There are a few action scenes even if there are no real fights though. Graphically, the film looks pretty solid as well. The animation isn’t at Yugioh/general anime levels quite yet, but the character models are clear and the screen is never blurry. You can always tell what is happening and you wouldn’t mistake this for a really old film.

For a sequel, I definitely think I’d rather not have humans get involved. They would just seem really out of place if you ask me and it could destroy the nice balance that the film has had. I’m sure that the film would handle it as well as possible, but I’d rather stick to the flying animals potential plot or water animals getting to the forefront. Keeping Zootopia as an animals only zone just seems like the right move if you ask me. The film’s positive reputation is definitely well earned and I’m glad that it did so well int he box office. Hopefully Disney’s animated films can keep up this high level of quality. With other animated rivals like Incredibles 2 coming out soon as well, this is a good time for fans of American animation.

Overall, Zootopia is definitely a film that I recommend. It’s a blast and was just a lot of fun to watch. It’ll fly by as you watch it and there aren’t any real big negatives to be found here. I wasn’t a huge fan of some of the characters like the Chief of Police or the front desk clerk, but most of the cast as solid. It definitely ranks up there as one of my favorite American Theatrically released animated non superhero movies out there. I’ll probably be watching Finding Nemo 2 at some point in the not so far future so you can bet that I’ll be comparing these two a bit. (Talking animals and all) The deck is stacked against Nemo, but you can never count that series out!