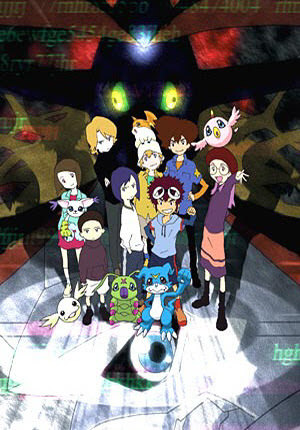 Our War Game was definitely a great Digimon movie and my personal favorite from the collection. Making a sequel to that one makes a lot of sense and Diaboromon was a really cool villain so I was glad to have him back. Unfortunately, they only gave the sequel around 30 minutes to work with which limits this movie to a noticeable extent. It is still a fun film, as a result, there just isn’t a lot of time to do just about anything. It’s very rushed, but we do get 2 big fight scenes so that’ll do. Considering the players in the actual battles, it still has more stakes than 2 out of the last 3 Digimon films.

The film starts off very quickly as Diaboromon returns and decides to wreck havok on the world once again. Luckily, the DigiDestined have learned of his plot so the main characters of the first two seasons have a meeting on what to do about this. They ultimately decide to send in Omnimon to take care of Diaboromon while the other characters handle the rookie Digimon that are infesting the city. Sounds like a good plan, but can Omnimon really win? After all, he only beat Diaboromon the first time because they used emails to slow Diaboromon down from the inside. Otherwise, Omnimon was much too slow to do anything about the villain, which continues to be a bit of an issue for him here. Davis may have to step in if things get dicey!

The film has no time to waste so that’s why things happen very quickly here. As with the last encounter, some of the Digidestined are a little too busy to help out, but most of them are ready this time. TK and Kari are probably the most useful characters aside from the main 4. They may not have super strong Digimon at their disposal like the others (They don’t want to use their strongest forms or haven’t mastered them I assume since they go with the standard modes) but are still able to give Diaboromon a good tackle and dodge his array of lasers for a good amount of time. They handled the situation well and I would have liked the other members to have helped out as well. Perhaps in Tri we will finally get to see the whole team help out.

I’m still not really a huge fan of the animation style used in this film. It’s a style that has been used for most of the Digimon films at this point and makes all of the characters very wavy. It makes for good explosions, but also makes the movie lose a lot of its color. For example, just about everything and everyone are faded out as opposed to the bright colors from the original TV show. It looks more like Seinen character designs as opposed to Shonen or Kodomo. It’s not necessarily bad of course, but the humans lose a bit of their individuality and I’d just like to see more color introduced.

I also think that it could possibly be linked with how Omnimon looks a lot weaker here than he should. He’s portrayed as extremely slow to an extreme level. It may be because of how the Digital World works in the film universe, but it definitely didn’t make him look all that impressive. In the human world he was a bit faster though so it may not be an animation/directing thing and just Digital rules that came into play. Imperialdramon got to show his stuff though and the hyped Paladin Mode was fun to see. With the raw power of a quadruple Mega, he should definitely be a force to be reckoned with. In Cyber Sleuth he had the ability to take out an entire team of 12 Megas in a single shot so even today he is considered to be one of the strongest of all time.

The final fight scene on Earth is quite good after all. The shots of Diaboromon’s true form slowly approaching were handled well and his rematch with Omnimon was good. It’s a shame that his fight against Paladin Mode only lasted a few seconds, but this is where the short length of the film really came into play, similar to the Janemba DBZ film. It also shows how strong the form is of course as it would look less impressive if it was more of an even fight. I’d still take Omnimon over Imperialdramon in a fight any day, but both of them are strong fighters since Imperialdramon has his humanoid mode. If he was stuck in Dragon form, things would be pretty tricky for him.

It’s pretty neat that now most of the kids in the world know about the Digidestined. It should make their work a little easier if they don’t have to hide the fights each time. Plus, since emails can slow down the villains, having the aid of the other kids can really be useful. Most of the adults will probably still be left in the dark since they can’t really comprehend the world of Digimon, but that’s okay. It made for a really fun plot in season 3, but it would need a lot of screen time once again so it would deserve its own movie if the series ever gets that plot.

I think it is safe to say that Tai is the best character here. He’s pretty serious the whole time and doesn’t hesitate to go into battle. Matt’s a close second though as he is also ready for action and has matured a lot over the years. He even acts as the leader a bit although Tai will always be the true commander of the team. Izzy helped out a bit from his end as well with a little aid from Yolei. Of course, the whole situation was Yolei’s fault as well so she was really trying to fix her own mistakes at that point. Mimi and Joe didn’t really get to do much, but at least Joe lent his bike to Davis and Ken so they could make it in time to help out. Ken and Davis were solid characters as well. I definitely agree with Davis that he should have been allowed to go and help from the get go. If Diaboromon had to deal with 2 Mega level Digimon at once, there is a chance that he never would have made it to the human world. The small Digimon weren’t really causing all that much damage anyway so they would have been fine even if they had been left to their own devices. Ah well, they got to prove their worth in the end after a rather long run to make it.

The soundtrack is all right here. As with most of the Digimon films, it takes a rather serious, Godzilla esque tone for the music. There was a nice quick theme that played near the end during the battle on Earth though. I remember that one being pretty solid. I do miss my classic English Dub Digimon evolution theme and hope to see it a bit in Tri or some kind of remix at some point, but I know it can’t always be around.

Also, one thing I definitely like about this film is the fact that the Digimon just hang out with everyone in the real world. I never liked the fact that they were forced to part ways at the end of Season 1, but the films helped to correct that. Now, the Digi Destined can hang out with their Digi partners whenever they want. Even when the Digimon go back to their world, you know that they can always come back to hang out as well. It also gives the humans more options since they can quickly summon a Mega to defend themselves if an enemy suddenly attacks the human world. Otherwise, they’d be defenseless and that would certainly be a problem. The season 2 cast is still basically defenseless without Davis and Ken (I don’t count TK and Kari) so they shouldn’t go too far. I’m still interested in how the 02 cast could lost in Tri, the main two members are fairly tough. Ah well, we’re getting closer to Tri so the mysteries will start to become clear.

Overall, Revenge of Diaboromon was a good way to bring back the fan favorite villain. I’ve always considered him to be similar to Broly in that sense as he is one of the only movie villains to return and it always takes the full cast at their peak in order to stop him. Without the season 2 guys, the DigiDestined would have been doomed against Diaboromon and his new power. He had the complete edge in the Digital World thanks to his army and in the real world his new form’s durability was quite impressive. Omnimon’s attacks couldn’t make a dent in his armor. It was a fun way to say good bye to the original cast until the new Digimon Tri movies. I do wish that the film could have been longer and I’d like the movies to start adding a little more color. It doesn’t have to be a lot all at once as a gradual effect will do, but I like my sharp colors. However, the film still holds its own and I’d put it in second behind Our War Game.