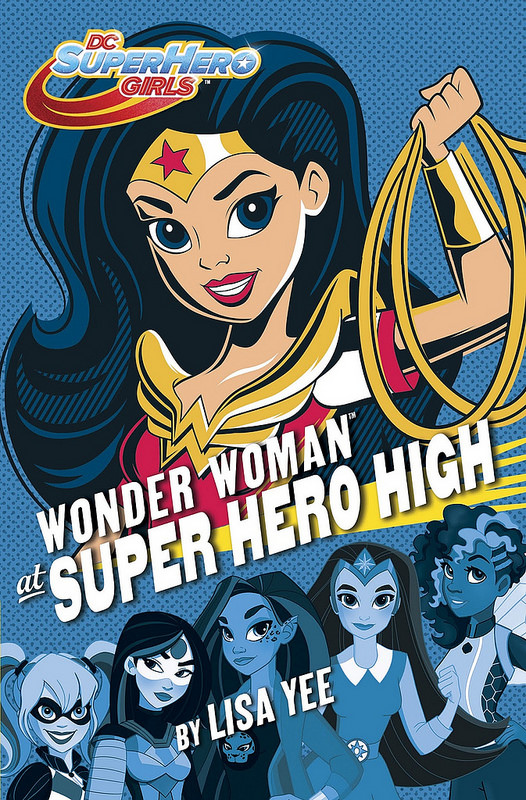 It’s time for another book review. I haven’t read a whole lot of books lately so it’s always fun to go back and finally read through one. The DC Superhero Girls lineup always seemed pretty interesting. The comic I read on Free Comic Book Day was fun and it seems like a nice piece of the franchise that people of all ages can enjoy. The book is also fun although Wonder Woman herself can be a little annoying. I look forward to seeing how the sequel fares.

Wonder Woman is finally joining Super Hero High and she looks forward to meeting everyone. She hasn’t really left the Amazons…in forever. Unfortunately, this means that she takes everything literally so expressions and jokes always tend to go over her head and result in awkward situations. No matter, that is not enough to deter Wonder Woman and she aims to help her school win the big Olympic Style event against the rival team…the Bad Boys!

I like the style of numerous short chapters as opposed to a few long ones. Maximum Ride did this as well and it makes you feel like you’re constantly accomplishing as opposed to once in a while. I believe the same is true of video games as well. You can finish the actual novel in a decent amount of time. It’s not short, but it’s not very long either. You can say that the size is just right. Books are interesting though in the sense that the first half of the book can usually all go to set up and development. You’d think that there wouldn’t be much room for the plot then, but it all evens out somehow. Either way, this book didn’t need to worry about a plot all that much as the main focus was on introducing Wonder Woman to the rest of the class.

As I mentioned earlier, this is the only real annoying part. Wonder Woman’s naivety is a little too extreme if you ask me. Do the Amazons not have any figures of speech? Her mother went to the school and clearly knew how to socialize so I’d expect Wonder Woman to have picked up on some of that. Even just a small bit would do. Wonder Woman means well and she’s a good hero, but I think that the story would have worked just as well even if she had known how to deal with everyone. They could have just emphasized how nice she is and the plot lines would have still worked. She still wouldn’t accuse the others all that much and would have rolled with all the tricks and media coverage just to be considerate. So, that’s why I think she could have been a better written character.

Of course, she makes some good friends during her stay at the school. Poison Ivy, Katana, and Harley Quinn seem to be her main friends. Quinn’s an interesting case though as she is still quick to humiliate everyone around her including Wonder Woman. Her rationale appears to be that it’s okay since she does it to everyone and they are still students so some mischief is fine. For the most part, I’d say that she keeps it to reasonable limits…except for when she threw all of Wonder Woman’s stuff away. That was a bit much, but she’s a fun character otherwise. Poison Ivy’s all right. She’s the very timid character of the bunch so she’s not my favorite character, but is fine overall. Katana’s one of the more likable characters as she is always eager for a fight and also tells it like it is. When she suspects that someone is trying to sabotage WW’s costume designs, she speaks up about it, which is more than most of the cast is willing to do. She’s a good friend to have and she will ensure that Wonder Woman isn’t subtlety bullied by the others.

Lois Lane has a fairly large role here as well as she helps Wonder Woman find out who is sending her the mean letters. Ultimately, she doesn’t find out a whole lot, but it’s hard to do much when you only have some letters to go off of. I thought that the book did a decent job of constantly misdirecting you as to who the culprit was. There were only a few people that it ever could have been anyway, but from those it was hard to pick one with total confidence. Steve Trevor shows up, but his role is pretty sad the whole time and the plot could have definitely been cut out. He just had no purpose in the story and the whole time you’re just wondering if the book is simply going through the motions.

Superman had a cool cameo though as he decided to root for the main team even though the media was probably hoping that he’d be impartial. Still, how could Superman root for a team like the Bad Boys right? It’s just not his style. It’s also cool how he’s still an adult while most of the other characters are teenagers. It’s an interesting AU in that sense as you never know where everyone stacks up when it comes to age. There are a lot of different stories that you can tell about the heroes being at school so this series can certainly go on for a while. It’ll just need to be careful not to be repetitive, but that shouldn’t be all that difficult of a task.

Overall, This was a fun start to the Super Hero High adventures. The cliffhanger has Supergirl joining the school so it’ll be fun to see her become one of the gang. In a sense, she’ll be Wonder Woman, but potentially a more likable version. I’m also waiting for some of the villains to show up and cause some mayhem in future volumes. The rival school already got school’d by Wonder Woman so we’ll need new threats if we want to take them seriously. I’d recommend checking this out if you’re looking for a fun little Superhero story. Even if you’re not usually a superhero reader, you can swap out the names and it’d just be a fun school story. There’s really not much to dislike here and my only real complaint is Wonder Woman. It’d be cool if Superman appears more in the sequel, but it’s not necessary…it’ll just give the story an extra bump up.