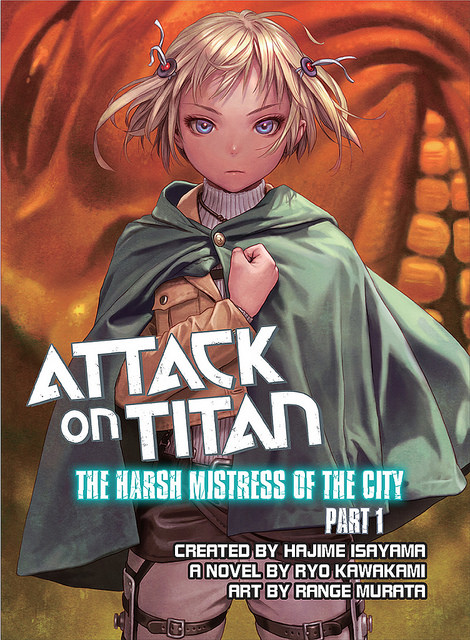 There are some series that can start out on a high note and keep that level of quality intact. Look at the Rudolph the Red Nosed Reindeer. It has the super emotional song from the first film, but still managed to get by just fine in the sequels without it. That’s because the writing and characters were on point. Other titles like Skip Beat can start out decently interesting and go into the gutter. It’s not about how you start a race, but how you finish it. That’s true in life, cooking, platformers, pie eating contests, and anything else that is worth your while. This novel may have started out to be pretty good and a contender for best novel in the franchise, but crashed and burned in the second half. The title should have been a giveaway I suppose.

The plot of the book takes place in a small little town in the Titan World. The bridge collapsed so everyone is kinda sorta trapped in the town. They can go outside though so I guess they aren’t really trapped at all. I don’t know exactly how the layout is since it doesn’t make much sense, but essentially all of the other villages have left them for dead. All of Rita’s bosses end up getting bumped off so she is suddenly the leader of the military. She goes from being a really nice person to a corrupt dictator and decides that the only way to give the people peace is to murder them and anyone who falls out of line or looks at her the wrong way is subject to death. She will destroy anyone who defies her wish of a Utopia!

Meanwhile, Mathias is the other main character. He was a rich guy who never had to work for anything and was ignorant of the ways of the commoner. He was good friends with Rita, but he ended up murdering her other best friend so he had to go into hiding. He must now find a way to take her down and considers that he may have to use lethal methods. Friendship and camaraderie is thrown to the winds in this tale as everyone does what they feel they have too. Things get a lot worse before they get better and they never really get better so just focus on the first part.

This adventure is two novels long and the first one was actually pretty decent. It was a fun enough tale about Rita and Mathias and how they lived very different lives, but did their best to connect with each other. It wasn’t a bleak and gritty story the way that most Titan adventures were and it was cool to just have a happy scene for once. It figures that this wouldn’t last right? The story started to get a little more grim as Mathias made a deal with some bandits to rob his father in exchange for getting him to the town where Rita was trapped. It didn’t go very well so the bandits murder a bunch of soldiers and then Mathias panicked so he blew up one of the young workers who was helping Rita. He panicked again after that and ran off. This basically happened in the final pages of the first book so it was quite a downer.

The second novel is where it really goes off the rails though. Rita was apparently traumatized after seeing her best friend murder her other friend so she decided to go down a dark path. She forces people to get eaten by the Titan she planted in the city and tortures others until they get her some intel. Nobody is safe now and she murders her father and is prepared to do the same to Mathias if she can find him as well as her best friend Amanda. The novel shows us in great detail just how insane she has become. It gets about as bad as the main Titan series in that regard and there’s no way she can come back from this.

This is why the ending of the book is rather hard to swallow. The author suddenly tries to make her sympathetic as she was only trying to help and she’ll be a nicer person now. She has this 180 character development in the span of 2-3 pages as Titans attack the city and suddenly we’re supposed to see her as a nice person again. Mathias also forgives her for murdering everyone and putting the townspeople in jeopardy every day since it just doesn’t matter now. Never mind the fact that one of Mathias’ main allies was poisoned to death right in front of him on Rita’s orders. She may claim that it was for the greater good, but she stepped well over the line of vigilantism and became an evil villain during this book. It was far more extreme than the book and characters acknowledge afterwards and it was just puzzling the whole time. It was an even more drastic character arc than Shu’s from Guilty Crown and that’s pretty scary. It may not be in Black Butler levels quite yet, but Rita is easily one of the most evil main characters that I’ve ever seen.

It goes without saying that I didn’t like her. Regardless of how good she was in volume 1, she nullified it all in the sequel. I didn’t care for Mathias either as there is no way he should have panicked so much upon seeing the scout and he handled the situation as badly as possible. It was hard to take him seriously as the rebel leader since he was always terrified of everyone and got tricked so many times. He was just annoying to see. The rebels were also a bit much as they were all too overconfident and full of themselves even though they could never do all that much when it came time to fight. The super hyped leader of the Rebels went down in the worst way possible as his drinking habits finally got to him and poison ended his career. You’d think that he would have been a little smarter about something like that.

In the end, the only real good character was Amanda. Even she was a little fishy as she took forever to make a move and just allowed people to be tortured and eaten. At least she did something about it though. She also got a lot of hype as being the best fighter in the squad, but naturally once she turned good, Amanda was surpassed by Rita. So much for the hype eh? She still put up a good fight though and was probably the only character who actually stayed true to herself. Again, the book kind of glossed over the fact that Rita was so evil in the end as she gets Amanda back her gear and they team up again. It just shouldn’t be so smooth. If anything, I think the ending should have kept Rita as a villain, it certainly makes more sense than suddenly making her a hero again.

Even the ending doesn’t offer much hope though as the heroes lost their town to the Titans. Their plan is to head to the next town, but they already know for a fact that the Town doesn’t want them and will attempt to slay the group. It’ll come down to yet another fight and that should give the Titans an opening to move in and take them all down. It’s Attack on Titan though so you should never expect anything even remotely happy for the conclusion.

Overall, What started as potentially the best Titan novel ended up being the worst one. It’s why I always say that you can’t really tell these things ahead of time. A whole novel (or 2 in this case) is more than enough time for a story to turn rotten. You won’t even recognize the characters by the end as they could basically be other people. In the end, what really destroyed the book was that it was way too dark and violent. If you thought the other novels were gritty, this one is far more intense. The novel could have made Rita’s character transformation a little less drastic and it would have worked a lot better. There’s no good reason for her to become a full fledged mass murderer. She should have just gotten more obsessed about the rules and we could have had the town be under a curfew with a lot of punishments handed out every day. The situation didn’t need to jump all the way to 10 so suddenly. Had the book showed some restraint, it would have been a lot better and glossing it over so much at the end didn’t help either. If you want a good Attack on Titan novel, I suggest checking out Before The Fall. It’s the only good one at the moment and shows you what Titan novels should be like.