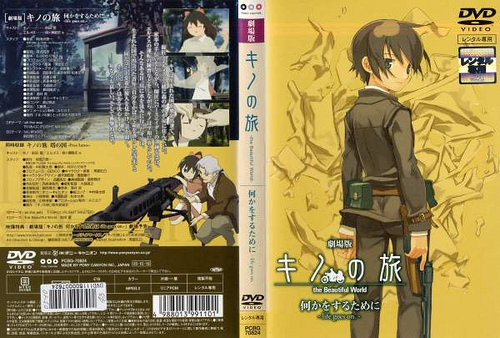 It looks like Kino is back on the job with this prequel OVA. We’re back in the days of her youth before she became devoid of personality but still after the tragedy of the original Kino. At less than 30 minutes long, this OVA is fairly short, but it’s not bad. We get to see more crazy customs and a lot of pondering by the cast. In a way, you could say that Kino’s Journey is like a grim Charlie Brown…just think about it.

So, Kino wants to find the village where the original Kino used to live. After all, she may have taken his name, but she feels like she can’t properly use it until she wraps up these loose ends. Her master allows her to go, but gives Kino a gun just in case. Kino may run into all kinds of dangers and having some form of self defense has never hurt before. What could have happened to change Kino from the happy girl that she used to be into the emotionless person that she would transform into? It is all explained in this special.

We may as well get down to business right off the bat. The series likes to show a lot of odd superstitions and customs from the various places that Kino visits and this one is no exception. The villagers have decided that anyone beyond their village is someone who cannot be bound by their laws. As such, they decide not to do anything while an old lady murders all travelers who come by so that she can avenge her son. Many travelers meet an ill timed fate at her hands until Kino shows up one day and puts an end to it. Kino ultimately puts her gun skills to use and the taking of a life took its toll as she immediately became a different person. I suppose it’s hard not to get jaded after that, but Kino should have suspected something.

I figured that the old lady was approaching nut bar factor 6 once the animation gave her a red tint and she started glaring at Kino. Kino didn’t quite realize this even after she started to tell the lady about how her son was murdered by Kino’s parents. Probably not the best way to go about this although the lady was going to take her down anyway. Remember, never accept a tea from a stranger or it’s probably going to be spiked. I suppose the old lady was almost a decent antagonist, but I’d like to see another gun pro as the main villain at some point. It would give Kino more of a challenge.

I can’t say that I’m crazy about Kino’s animation. It’s not really my style as it goes for a more retro, grainy look. I suppose making it look older can help make the atmosphere a little more mysterious, but I’m sure you could do this with modern animation as well. There’s not much of a soundtrack since this is a rather quiet show, but it was neat to hear the classic sound effects from the show.

While this special was good, there is one area where the franchise could improve a lot and it would help future titles. The main cast needs a serious revamp. As it stands, there aren’t really any likable characters at all. I liked Kino until she reverted to her TV show form in the end, but nobody else stands out. The Motorcycle is a pretty bland character and the master didn’t seem to have a personality. The main villain probably stood out the most and she’s totally insane. Adding in good characters can definitely make a difference and it’s probably what separates this from Twilight Zone as the two have a very similar concept. This show just doesn’t have the cool alien episodes or supernatural adventures and prefers to stay old school. Not a bad decision per say, but it does limit its opportunities.

Overall, Life Goes On is a good way to continue Kino’s Journey. I clearly did enjoy it more than the show as this kind of series is definitely a case by case basis. If the story is good then we’ll have a winner, but if the traditions are too dicey then it won’t have the same effect. This special was interesting enough and the time went by at a good speed. If you enjoy adventures where you get to see different lands and situations then this should be up your ally. It’s a special that easily stands on its own so you don’t need to have seen the show to get what’s happening. It’s not the most exciting thing out there, but it’s good enough to warrant a watch.