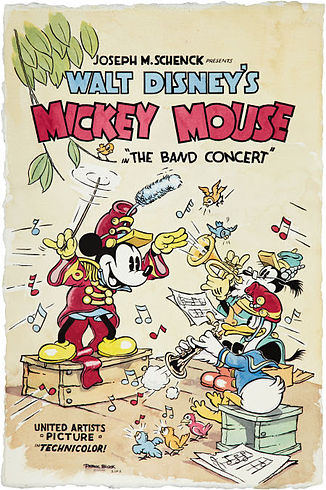 It’s time for another classic Disney review! In this special, Mickey Mouse is actually the antagonist for once. In my head canon, Mickey Mouse let the fame get to him and he forgot to look out for the little guys. As such, he is now the leader of a band and only allows top musicians to play with him. Donald tries to get in on the action, but Mickey reacts violently each time. He’ll have to think of something to get in on the act, but things get tough when a tornado sweeps through and carries them all off. Can Mickey finish his song or will Donald interfere again?

It’s a pretty entertaining special and I can see why people consider it to be one of Disney’s stronger ones. I thought it was more enjoyable than the others that I’ve seen as well. It’s pretty high energy the whole time. Sure, Mickey is pretty out of character, but it just goes to show that even he loses it once in a while. At least Mickey is super focused as not even the tornado could break his concentration. His team didn’t miss a beat and that’s why they’re considered as the pros.

Meanwhile, Donald Duck did his best to fit in. He didn’t let the others get him down and came with a lot of flutes just in case. I’d say that he’s easily the best character in this special. Donald is a reminder to us all that nobody can stop you from playing your tunes except for yourself. This special was a little light on dialogue so we didn’t get to hear Donald’s iconic voice as much as I’d like, but it’s still always fun to see him on screen. Donald is certainly my favorite from the old Disney characters. Another bonus is that Goofy doesn’t get much to do here since it’s just a bunch of Goofy ripoffs in the band and none of them have any lines if I recall correctly. Most excellent!

The actual song that the band was playing was pretty good as well. I definitely don’t mind old style songs for a special like this one. After all, something like Brave or Excalibur Clash wouldn’t fit so well right? I sometimes like to wonder what is better, to have a really epic song for something simple like baking a cake or to have a fairly uneventful theme playing the whole time. The latter would be forgettable, but the former would hint at something epic coming up and then you’d just be disappointed. It’s a tough question for sure.

Overall, it’s fun to check out these retro specials. They’re really short so you can breeze through them, but the animation holds up well. Mickey Mouse and the others certainly got iconic through these shorts so Disney knew how to market even back then. Still, I doubt anyone could have ever guessed just how legendary they would ultimately end up being. There are a lot of specials so it’ll probably be a while before I see them all, but I’m getting there step by step.