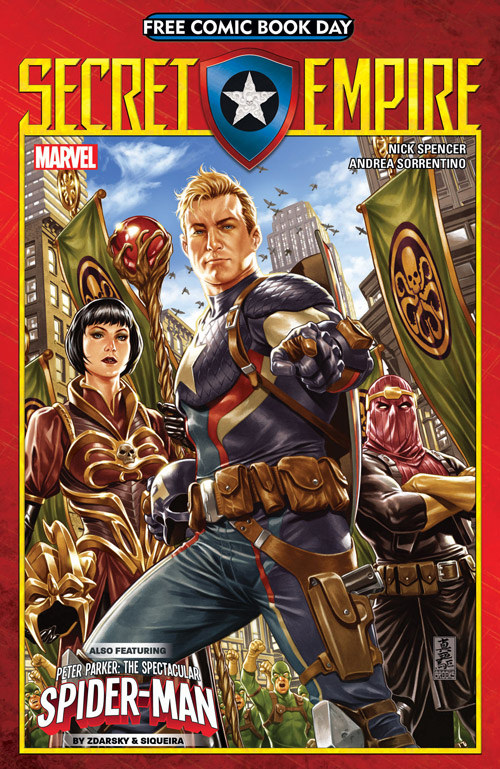 It’s time for a look at the big Marvel event that is coming up. The premise is pretty laughable and the actual comic has more plot hax than I’ve seen in a very, very long time. That’s part of the charm though, think of this as a satirical parody and you’ll be just fine. Otherwise, you’re just going t have to stretch your disbelief on this one a bit.

So, as you have probably heard by now, Captain America has turned evil. He works with Hydra now and wants to rule the world. The issue has him attack the Avengers so that he can bring everyone under his domain in one fell swoop. The Avengers roster is pretty strong as this point since they have female Thor, Iron-Man, Hulk, Ms. Marvel, and a bunch of other fighters. No worries, Captain America has this planned out through very vague stuff as the heroes just start fainting. The narrator is pretty dramatic about the whole thing as he lets you know that the heroes were clearly outmatched. I value his input, but the heroes should have easily defeated Hydra. Even with Captain America on their side….it’s not as if the villains are that strong.

The art isn’t bad. There’s a red effect playing the whole time so it can be hard to see anything though. I don’t see this event being all that great, but I’m hoping that it’ll be somewhat good. Any Marvel event has the potential to be great since you’re bringing all of the big characters together for a lot of hype action scenes. How can that possibly go wrong right? I’m just going to need the writers to come up with a bunch of reasons for how the Avengers lost so easily so that at least one of them can be believable. Evil Captain America holding Mjolnir? Ha!

The backup story sees the start of a new Spider-Man series that must be written by Slott. The dialogue is just so bad that it must be him right? It starts off with Spider-Man and Mary Jane arguing quite a lot about everything that they can think of. They get in a lot of personal insults and then Spiderman has to run off to fight the Vulture. Spiderman acts very aggressively the whole time as he keeps on insulting the Vulture over and over again. Finally, they’re both immobilized because the new Trapster comes and takes them down. She steals the cash and insults both of them as well. Good thing she’s one of the “nice” villains who doesn’t want to actually destroy the heroes. She could have finished off Spiderman but decided not to do so. That’s nice of her.

I’m also glad that the comic referenced how old Spiderman is nowadays. The new Trapster mentions how he was around when she was a kid so he must be ancient by now. It’s definitely true since Spiderman should be very old at this point and time. Luckily being a hero gives you some immunity to the usual effects of time passing. You just can’t stop a friendly neighborhood Spiderman. I can’t say that there’s much of a hook to continue reading the story though. It seems like this is going to be a pretty bad depiction of Spiderman and the new villain isn’t much of a threat. Perhaps the point is that Spiderman will be back to dealing with street level opponents, but that doesn’t really come across as very epic now does it? Still, if the writing improves then it could be a good story.

Overall, I still can’t get past the concept of Secret Empire. Am I really supposed to be taking Hydra seriously after all of these years? The characters sure weren’t as they kept making puns and one liners even while they were being defeated. Clearly they weren’t feeling the danger. For Spiderman it seems like the same ole same old stuff, but I’m sure they could do something there to make the whole thing more exciting. Hopefully the event/series premiere ends up turning out good. It’ll have to be from the normal comic readers though as this issue likely won’t bring more people on board.