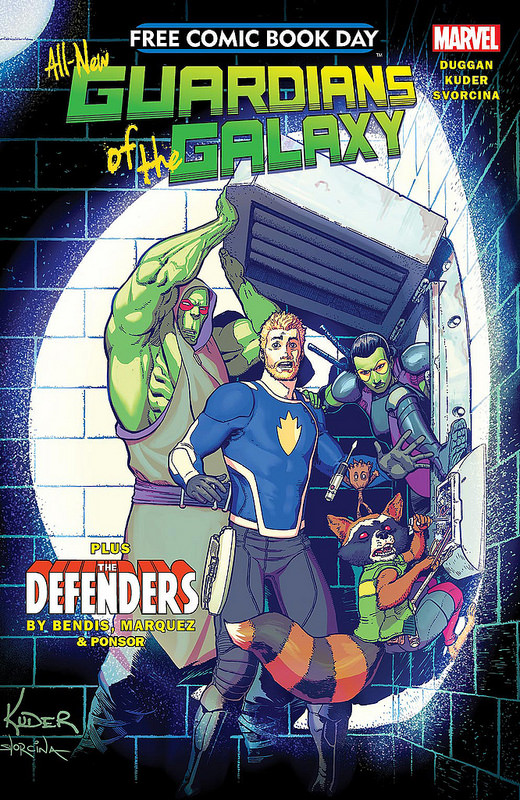 With the film currently out, it definitely makes sense to have a Guardians comic. The marketing guys were definitely ready. It’s also clearly movie inspired at this point with the roster being identical. Surprisingly the comic seems to have gotten the D rank artists. The art looks terrible and I’m just wondering what happened to the series. The previous comics that I had read of it looked quite good so this is a big drop in quality. In particular, Rocket and Drax look very off. Still, you can’t say that Gamora or Star Lord look much better either.

In the plot, the team has gotten captured by the Nova Core. The Nova are finally back in biz after apparently being out of commission for a while, but now their members are all expendable green aliens who are picked on by the Shiar. The Guardians escape of course and steal a ship as well. The problem is that everyone is after them as per usual so the team is going to have to stay sharp and stick to the shadows. It’s a decent story, but the art is just a real drawback. The comic also got surprisingly brutal in one scene as someone’s eye is taken. That scene was pretty unnecessary and you can probably guess which member of the group brought this to the table. Meanwhile the “Drax is a pacifist” plot will definitely be intriguing. We’ll see how long that lasts.

Luckily, the backup story is a lot better. This time, the Defenders are getting some hype since the show is almost here. With the Kingpin out of the way, Diamondback wants to bring Hell’s Kitchen to its knees once more. The problem is that Daredevil and his friends are always getting in the way. To fix this, he heads to Jessica Jones’ office and shoots her. He also sends a message to the other members via attacks from his cronies and declares the neighborhoods to be his. If the heroes attack him…he’ll attack back!

This story was good because the art was very solid. The shading effects were great and all of the characters seemed well rounded. The writing was solid and this is a good way to hook in a new audience of comic readers. The cliff hanger was good and even if these gangsters seem a little outmatched, it could still make for a pretty good story arc. I’m not sure about Jessica losing so easily but maybe she doesn’t have any real abilities in the current comics. That or this Diamondback fellow is just that fast. Regardless, it brings some nice stakes to the table.

Overall, this was a good issue. Defenders really brought its A game and it’ll be nice to see the team get some recognition again. It’s been a long time since they were talked about in the same sentence as the Avengers or Fantastic Four so if the series gets big, then that problem will go away. Guardians didn’t really go anything for me. I suppose the Shiar vs Nova corp subplot could be good, but only if there are some actual characters on the Nova side and they’re not just all nameless aliens. Bring back the X-Men as well, those crossovers always looked pretty fun.