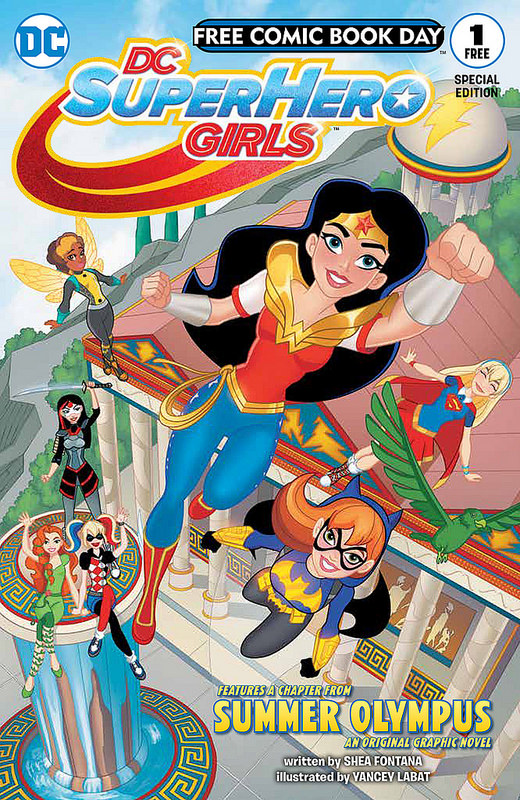 I got to read one of the novels for the SuperHero Girls series so I’m finally a little more familiar with it than I used to be. It’s a fun concept and a good way to get more people to read comics. I can certainly get behind the series. It’s also impressive how it expanded so far in such a short amount of time. It appears to be going strong.

Well, the comic starts off with Wonder Woman and her pals dealing with a pair of rhyming villains. They had a lot of good burns even if they naturally lost to the Amazon warrior. After that, Wonder Woman is invited to spend the summer with her father Zeus, but is a little intimidated at this prospect. Fortunately, she is allowed to bring her friends. Nobody wants to go so Wonder Woman ends up settling for Bumble Bee. Upon her arrival, a gust of air assaults the heroes and Wonder Woman wonders if this was really a good idea!

There’s not a whole lot of action of course, but it’s a fun read that you’ll be able to blast through. It’s also very interesting whenever you see a villain since most of the characters who are usually villains in the mainstream comics are now heroes. I wonder how the writers decide which villains to keep as villains. Originally I would have thought that every character would be a hero, but I suppose that wouldn’t make sense and would take away any sense of danger.

The story isn’t quite as engaging as the one from last year’s event, but it’s still pretty fun. The friends all came across as rather unsympathetic to Wonder Woman’s plight and I’d call them mean spirited if I didn’t realize that it wasn’t intentional. They just already had plans. The artwork looks pretty solid. It’s not absolutely top of the line the way that a lot of DC comics look. It is going after the My Little Pony/Strawberry Shortcake crowd with brighter colors and more abstract designs. Maybe “simple” is a better way to describe it. It’s not all that intricate or detailed, but it makes it easier to read. All of the character models look right so I’m definitely on board with this.

Overall, SuperHero Girls continues to be a fun comic series to follow. It even had Supergirl catch the villain instead of Wonder Woman which lightly hints that Supergirl is still the faster heroine. It’s always a fun matchup to think about. The Zeus arc should be pretty fun, especially since it seems as if at least one god is against Wonder Woman. My money’s on Ares personally, that guy always did have a bit of a grudge.