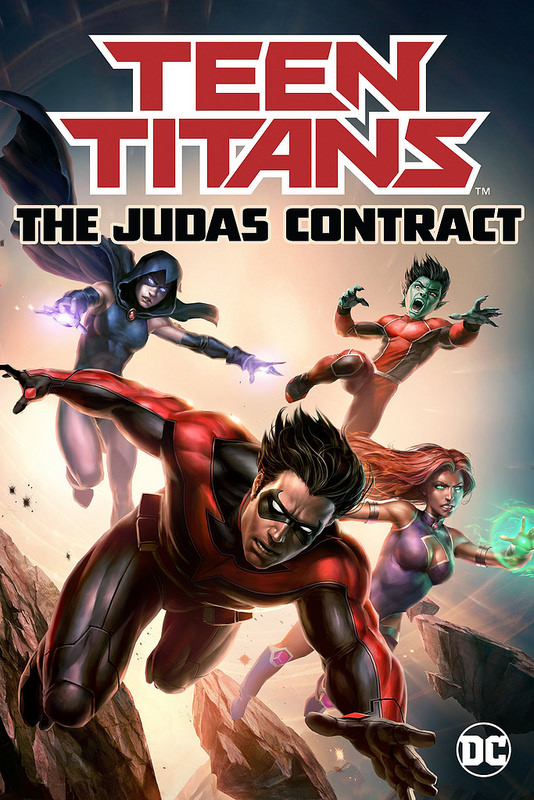 Now I can finally be caught up with the main DC films. They’ve been on a solid roll and it’s good to have DC finally reclaim the throne. That being said, it’s not nearly as good as Bad Blood or Justice League vs Titans. Those films did set quite a high bar though and this film is still pretty solid. The action scenes are on point and all of the characters get to show off their skills. Considering that fans had been waiting for this film for around a decade, it was nice for them to finally get a payoff.

The Teen Titans are finally a pretty close knit team. They’ve even got a new member named Terra who is useful for breaking into enemy bases. Nightwing does his best to get back into the swing of things since he left the team for a long time. It looks like he showed up just in time since the assassin Deathstroke has shown up once again and he has his sights set on the Titans. The Justice League aren’t available to help in this round so Nightwing has to put his training to good use and solve this issue on his own.

The film starts off with a decent action sequence as we learn about one of the Teen Titans first missions. At the very least, it was how they first met Starfire and ultimately she would become the leader. I have to say that the old roster may have been a little stronger since they had Kid Flash, but Starfire’s a pretty decent replacement. The actual Titans from that era were fairly unlikable as expected since the film really played up the whole Teens angle. That also ends up hurting the main cast to an extent as well.

The main plot with Deathstroke taking everyone down was a lot of fun though. I was wondering how they would incorporate Deathstroke into the film since he met an untimely demise a while back, but the reason was satisfactory and the most plausible one of the bunch. Fortunately for him, Deathstroke also got a lot stronger and became better at hand to hand combat. He looked so terrible in Son of Batman, but this was a great way to finally treat the character with respect. I’m definitely a Deathstroke fan and his portrayal here was spot on.

Naturally, Terra also gets a big role, but I can’t say that she was likable here at all. I’d actually say that her TV show version was probably better. This one’s subplot with Deathstroke was pretty unnecessary and her “Too tough for everyone” personality didn’t work well. If you want an example of a character who pulled it off, look no further than Damian! Damian’s role here was fairly small since he wasn’t in the comic and the writers didn’t want to upset the fans. Still, he looked good in his brief appearance as he put up a fight against Deathstroke and seemed to be the only member with common sense. I know the Titans are about acceptance and all, but letting in random people with no background checks is extremely risky. Damian’s hunch proved to be correct as it always is.

A minor subplot is how Starfire is worried that the other members treat Nightwing as more of a leader than her. It’s to be expected since he was the leader for a while, but he’s a nice guy and does his best not to usurp her authority. Starfire’s not a bad character and still a big step up from the TV show version. She could be better though. This also wasn’t Nightwing’s best appearance and all of the scenes with him and Starfire typically just slow the film down. He still does well in combat though.

Beast Boy’s still as annoying as ever. There’s no way Terra should fall for him just because he is constantly pestering her. He was basically asking to be betrayed the whole time and it’ll probably be tough for me to ever be a big fan of his. Blue Beetle’s scarab continues to act up and it’ll be fun to see if a film tackles that plot at some point. His subplot was pretty boring though and definitely didn’t need to be in the film. It’s nice of him to help out, but did it have to immediately have to also become a romance subplot? What happened to just having nice co-workers?

Raven gets the smallest role here, but she already had her own film so that makes sense. Unfortunately, she is heavily nerfed as a result. Honestly, the power levels are pretty bad all around here which is a shame since the previous film did pretty good with them. Raven losing to Terra is one of those “I can’t believe that happened” moments and the Titans just ganging up on Brother Blood at the end was also pretty iffy. His powers seemed to magically vanish and suddenly he was getting wrecked by everyone. The only main fight that I was really okay with was Deathstroke taking on Damian and Nightwing since a super soldier serum can definitely make that plausible. Every bit of strength and speed helps a lot in a fight like that.

The animation is definitely sharp as expected. All of the fights are pretty sharp and the character designs on point. DC’s never disappointed in this area though so it’s hardly a surprise at all. Unfortunately, the soundtrack didn’t return from Justice League vs Teen Titans. That one had some really good tunes, but this one went for a more generic ensemble. It wasn’t bad, but I can’t remember a single tune, you’d think that it was a silent film.

Ultimately what holds this one back from being as good as the others is the writing. It’s a little more sub par this time around as it’s a TEEN Titans film as opposed to being a Teen Titans film. There’s a lot of romance and drama everywhere with some rather iffy lines being thrown around. We did get our fair share of superhero action as well, but these elements definitely weakened the film just enough. It also doesn’t help that I’m not a Brother Blood fan and he’s as boring as ever. At least he got a power up so he could actually fight here. Still, you can easily forget that HIVE is in the film and it wouldn’t really change much.

Overall, The Judas Contract is a good film. It’s not as sharply written as the last few films and Raven was nerfed way too hard, but it’s still enjoyable to watch. The film breezes by since it’s so short and that allows then pacing to always be pretty quick. Damian’s a highlight as always and Deathstroke has fully reclaimed his glory. I look forward to seeing what the rest of 2017 can bring for DC animation. I want to see a Justice League movie now that DC is bringing its A game back. A Trinity War adaption could be a lot of fun or we could even skip to the Darkseid War at this point. Wherever we go, it should be hype!