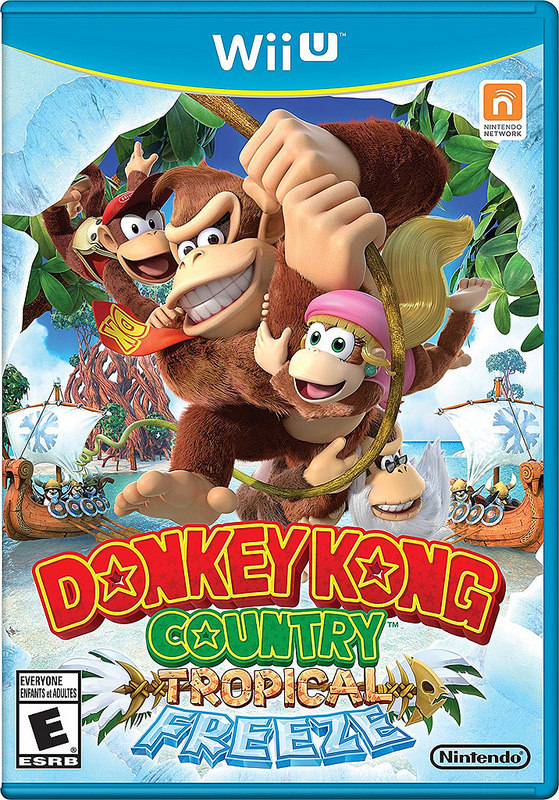 It’s time to review the final DK Country game and possibly the final main DK game of them all. The Country series has been pretty solid for all of the installments so it’s nice to see what the Wii U can bring to the table. The game is a little shorter than Returns and noticeably easier as well, but it’s still a quality platformer. One nice mechanic that they added was the dash and now I can’t imagine playing a DK game without it. It makes the characters so much more versatile and deadly in the levels.I certainly had a blast spamming it and it’ll remind you of the 3D Sonic games.

The plot involves a group of ice creatures deciding to take over a mountain. This angers DK and his pals because they want more bananas and they don’t grow in frigid temperatures. Thus, DK and friends decide to beat people up along the way and eat what they can. Still, can they defeat this Bowser impostor or will the trials be too much for them? The story definitely pales in comparison to the last game though for one key reason…the first 4 worlds are filler. They have nothing to do with the plot and there aren’t even any ice levels in them. For a game that’s called Tropical Freeze, this was a little odd. Once you enter the final 2 worlds then the ice levels start to show up so that was neat. Either way, the level variety is always fun, but I wish the plot could have worked with that a little.

The gameplay is the 2D platforming that you would expect. That being said, as mentioned earlier we now have a dash mechanic. It is incredibly handy as you can cross large distances with the move. It’s also not too automatic or easy so it feels like a legitimate technique that you’ll want to master. If you learn it just right, you’ll find yourself blasting through the levels. The gameplay is very smooth and you can definitely know that this is a AAA game right off the bat. I was very happy to trade in the Wii remote controls for a more proper All Pro and Gamepad setup as well. It’s night and day comparing the two styles for this platformer.

While the levels are significantly easier than DK Country Returns, it’s not really fair to say that it’s too drastic. The main reason for this is that I just got done completing the former so it’s possible that I’m just more prepared for whatever the DK series throws at me right now. It’s like playing Dark Souls 1 and 2 back to back. 2 will probably feel a lot easier than 1 did initially. I do think that Tropical Freeze probably had the tougher bosses though. It’s a close one, but the last boss for example would certainly be rather difficult to defeat in one player mode. He has a lot of health and it’s hard to predict his horn attack. It almost feels purely random. I don’t think any of the bosses are inherently unfair though. They’re tough, but you just need to keep on going at them until you win.

The soundtrack isn’t bad. There are no super hype themes like the Returns villain jingle, but they’ll get you through the stages. The boss theme that plays when a boss first shows up is similar to Mighty No 9’s main boss theme which is pretty interesting. There’s a good guitar/drum solo that works well for that. I don’t really recall any of the stage themes, but they were pleasant enough. The graphics also look pretty sharp for the title. It brought back the Shadow levels and the elements all look really sharp. The characters also look good in the cutscenes. Nintendo never disappoints when it comes to the technical aspects and they rarely do with the gameplay either.

There’s a good amount of replay value here as you’d expect. Collecting all of the puzzle pieces in the levels will certainly take a good amount of time. There are quite a few of them in each level after all. Most of the levels require repetition to really get them down so it’s more about the time than the difficulty. I believe you unlock an extra world if you do that so that’s a nice incentive. It’ll certainly give hardcore DK players a few extra hours to have fun with. The main game will only take you a handful of hours as well. 6-8 I’d imagine, but that’s a pretty decent length for a platformer. Having 8 worlds helps a lot, but 6 will do.

Overall, Donkey Kong has brought us another pretty solid game. If you want to really experience the difficulty as the true DK experience, make sure you choose to play as DK. If you want to coast through the levels a little easier, make sure to pick Diddy Kong or Dixie. They can cheese you through just about any obstacle. I look forward to seeing another Donkey Kong country game rise to the surface. Hopefully the plot will be a little better even though I know that is rarely Nintendo’s goal. As long as the gameplay is good, I suppose the rest doesn’t matter quite as much and Nintendo certainly knows how to handle gameplay. I never got to play as Cranky, but that’s fine. I get the feeling that his special ability wouldn’t have been all that great.