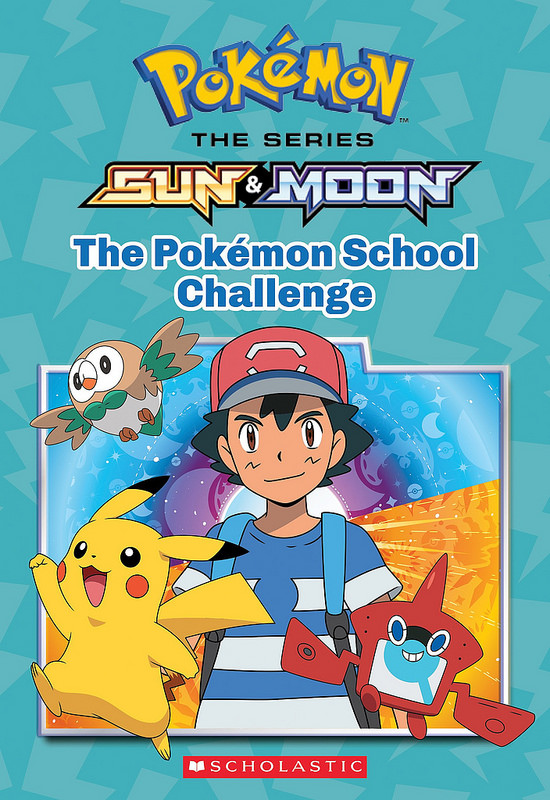 I read the first volume in the Pokemon chapter book series for the recent Sun and Moon adventures. I was debating on whether to review this book or just wait until the series ends, but the latter could certainly end up taking a while. Ultimately I may start reviewing the individual books for some titles with no foreseeable end while for others a series review still makes sense. It’s tricky, but especially since this book is so small it seems reasonable. It covers around 2 episodes of the anime give or take. The series had a lot of controversy surrounding it when it first came out and it’s easy to see why. Pokemon went from being a really serious action show to a comedy. It’s not the Pokemon that I grew up with, but it works out well enough.

The series starts with Ash being on summer vacation. He sees a lot of cool new Pokemon while at the new region and asks his Mom if he can stay. She allows it and he quickly joins the school so he can learn how to be a Pokemon Trainer. I can understand why he would want this knowledge since he’s been training for over 10 years with nothing to show for it. He hasn’t even aged a day for some reason. So, Ash sticks around and everyone starts to teach him the ropes. However, the island’s sacred guardian has taken an interest in the kid and challenges him to a fight. Can Ash really win this battle?

Ash has definitely lost most of his character development from the old days so part of the plot in the series will likely be him gaining it back. He learns something new in every episode so in about 100 or so episodes he should be a good strategist once again. It’s a long while to wait, but what else can we do right? It’s just the way it has to be I guess. Pikachu has also gotten quite a bit weaker so it’s rough for the pair. They used to be one of the strongest duos and now they’re getting kicked around left and right. It feels bad when you really think about it. They are still good leads though. They mean well and are always up for a challenge. The series works much better when you just think of this as a prequel. Imagine that it takes place immediately after episode 1 of the original series and you’ll be set.

I think one of the parts where a book can adapt this better than an episode is that the comedy gags don’t stand out as much. Ash getting pinched and saved from random disasters doesn’t seem as bad when you’re reading about it compared to actually seeing it on the big screen. He keeps a little more of his dignity this way, at least that’s how I see it. For example, I can’t stand the living Pokedex in the anime. That may be a bit strong, but at least in AMVs and such he just gets in the way. In the book he barely talks at all so he’s not as annoying.

That being said, learning all of the names is going to take some time. The new rival is a guy who’s named something close to Kiwi. He talks a good game and has a Charizard so I’m expecting him to fight quite a bit, but he gets on my nerves. He seems to think of himself as a big shot. The other friends are nice enough but they start to blend into each other since their personalities are virtually the same. The teachers try a little too hard to all be suave and cool around Ash, but it just doesn’t really work. Once they fight and prove themselves, then things could be different.

Team Rocket doesn’t get to do a whole lot here either. Nobody really fears them and while they may be more of a threat in this region than the others since Ash has forgotten how to deal with them, they aren’t very interesting. The only part that will make their plot fun is Mimikyu once he’s a main character. I had fun watching his fights in the anime and he’s probably the best part in the whole region. He looked quite good in the book as he was beating Pikachu with ease, but had to leave since Team Rocket was getting wrecked. Why do they manage to snag really cool Pokemon like that one?

Finally, Tapu Koko is a pretty cool Pokemon. He easily has one of the best designs in the entire region which may not be saying all that much but I’m certainly a big fan. He lives up to the hype and really manages to be a thorn in Ash’s side. He’ll make for a good rival as I’m sure he isn’t quite done with Ash and friends yet. His appearance also resulted in an action scene so I’m all for that.

Overall, This chapter book is quite short of course so you’ll read through it right away. It still does a good job of covering quite a bit though. This region certainly is my least favorite because the animation is the worst and there’s less action than usual, but the former doesn’t apply to the book and the latter isn’t noticeable yet. If I didn’t know any better, I’d actually consider this to be a pretty promising start to the region. If you’re a Pokemon fan then you’ll certainly enjoy this and it’s a reasonable way to jump into the franchise. It certainly is new reader friendly. We’ll see if the next book adaption can be quite as good. Moreover, I’m ready for Ash to finally win a fight!