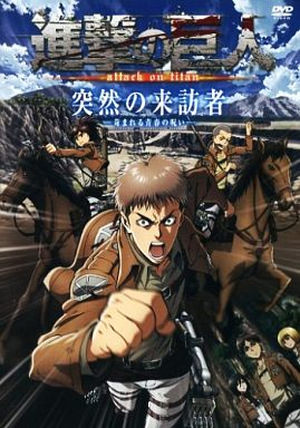 It’s time for another Attack on Titan OVA. You’ll be happy to know that this one is the best yet. It approached dangerous territory when the characters decided to go hunting, but the special did a pretty good job of handling it. It wasn’t perfect, but it managed to save itself as there was no blood or anything. It would be a little dicey if this was a long show were that kept happening or a movie with repeated scenes of this, but as a one off it wasn’t fatal.

This special should really be called Attack on Jean. He’s a pretty minor character in the main series, but he effectively got his own special here. Jean wants to get a cushy job in the Interior so he won’t have to fight Titans for a living, but this is proving to be difficult. His best chance is to do well in a training exercise, but then his teammates destroy this chance by just being better fighters in general than him. Jean doesn’t take this too well and hastily accepts a cooking challenge against Sasha. If he wins, she’ll have to stop up staging him every day of his life. The battle is on, but can Jean really win?

I do have to say that the remixed opening was handled pretty much perfectly here. We see a lot of shots of Jean running around and trying to be relevant and then at the end when the music is ramping up we just have him walking around since he usually doesn’t get to do much during the climax. It’s emotional yet also very fitting for the character. The soundtrack in general is easily 5 star material as we get most of the show’s famous themes from the first season. It’s just consistently amazing. The visuals are also pretty good. You’ll recognize the green energy effects the show loves to use and all of the character designs are on point. It’s not an action this time around so it’s hard to say just how good it is in the end, but it’s certainly good enough for me.

One thing that is interesting to note is that Jean is a whole lot meaner than usual. In the main series he’s not the nicest of guys, but he’s still pretty even tempered as he just tries to get promoted to a safe job. In this special he’s mean to his Mom for no reason and even threatens to punch Sasha. He resorts to stealing/cheating and just has absolutely no moral compass. I suppose it’s part of the humor, but I can’t imagine his fans would be too thrilled about this. The Mom subplot in particular felt random since in the flashbacks Jean was actually a nice guy and I suppose we are led to believe that joining the army corrupted him. He’s just not the nice guy that he used to be anymore.

The ending is also really cheesy so I wasn’t thrilled with that. We all know who should have won the cooking contest based on the two dishes. On the other hand, we can also assume that the wrong choice was picked because the judge was incredibly drunk. At least he was in character as I’ve never liked this guy. He has some hype but never does anything with it and is content to boss everyone around from the sidelines. Not the kind of guy you really want on your side.

As I mentioned before, there was one tricky scene where the heroes decide to hunt a boar for no good reason. Unfortunately they do nab him, but it was at least not done in a violent way. It’s a nice consolation. That’s really is for negatives and minor gripes. Beyond that, the special had really good pacing along with its soundtrack and graphics. It did a good job of embracing its comedic nature without going too far. For example, a good scene was when everyone transformed into Titans and could only watch as someone started taking everyone down. It was a nice high budget action moment that was certainly one of the highlights. It was just a good amount of fun.

I also liked Eren’s cameos as he called Jean out and also didn’t let Mikasa do all of his work for him. Eren likes to contribute so he will get strong enough to stomp all of the Titans. It would have been cool if the special could have kept in the scene where Eren beat Jean up, but at least the highlight is up on Youtube so you can always pause the special and quickly watch it during the beginning where it would have been perfectly thrown in. In case it wasn’t too clear, I was on Sasha’s team for this mission as Jean just didn’t do anything that made me want to root for him. He was basically the antagonist in this one after all.

The special also added some clever homages to the main series like when Sasha hit Reiner with her elbow in the same way that Eren attacked him in the forest. It was the same exact shot and I seem to recall 1 or 2 other instances of this. It was a nice bit of foreshadowing for the people who had already read the manga. Fans of the series will definitely get more out of this than average viewers, but both should still enjoy it quite a bit. It’s ironic that the best Attack on Titan special would be the comedy one, but now we know what the series could have been if it was a parody.

Overall, Attack on Jean was pretty fun. I wouldn’t mind if the series followed his adventures, but I have a feeling it would still suffer from the same problems as the original and a big problem would be that there would be fewer Eren scenes to try and bring it back up. The ending may be a little disappointing, but I’d still recommend checking the special out. It’s just pretty fun and quite possibly the only time you’ll be able to see Attack on Titan like this. It’ll truly go down as a collector’s item.

2 thoughts on “Attack on Titan: A Sudden Visitor: The Torturous Curse of Adolescence Review”