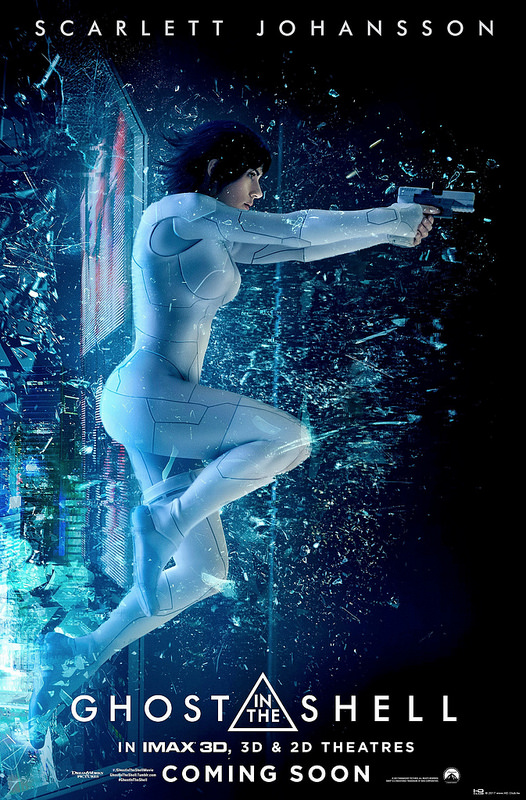 All right, it’s time for another Sci-Fi film. Fortunately this one embraced that side of things a lot more than Power Rangers. From the start you can tell that everything is a little more on point from the attire to the backgrounds. The whole movie takes place in a very futuristic NYC (Basically) which was instantly a good sign of things to come. The second half starts to lose focus a bit and I would have liked for Major to be a little tougher, but overall it was a pretty solid film.

Major is the first human to have had a full transplant into a machine body. Essentially, only her brain is still the real deal. Everyone else has dabbled with cybernetic implants though and normal humans are basically extinct. It’s all about Big Business and corporate money now as everyone tries to get richer and richer. Society has essentially fallen to the slums despite the enormous wealth to the top 1%. Major is an assassin who takes down all of the targets that she’s ordered to eliminate. The government has a lot of targets of course, but a hacker has surfaced who threatens the status quo. Even the Major isn’t immune to the hacking, but she decides to look into this anyway. She is being haunted by visions in the meantime though and is there something that the scientists aren’t telling her?

So as I mentioned, the costumes here are pretty good. I’m iffy on the Major’s since the costume has no real design. It also felt like it was basically just there for fanservice. I liked her black cloak that she wears for part of the film though as it’ll remind you of Mirror’s Edge or Sword Art Online. The trench coat that her sidekick wears is also really good and will remind you of Final Fantasy. Everyone just looks really cool and this is what a futuristic sci-fi is all about. FF XIII did it better than most and you can see a lot of similarities between the two. The city also looks great and the advertising also makes sense. The place has truly sunk even more as the ads are not for kids, but I can easily see this kind of thing happening.

The film doesn’t really have time to talk about all of the scientific advancements, but I’m fine with that since such an explanation would take an incredibly long amount of time. The effects are also pretty good like Major’s camouflage mode and the fight with the giant robot. Major’s suit has a nice energy feature to it where you’ll see it glow more as she exerts herself. Every part of the film felt like it had a good budget.

I was also pretty satisfied with the writing. It was pretty good and the characters stayed serious while not all sounding like high school delinquents or being over the top. They followed orders and just completed the missions efficiently. The movie even made the old boss pretty hardcore as he can apparently fight despite being at least 70-80 years old. The scene of him getting out of the car and shooting everyone was really quite good. Even the shooting scenes are better than the average film as they aren’t violent or anything. You can feel the impact without the film showing you everything.

I also thought Major was a good character. She makes for a very good assassin and her character arc is good. My one gripe with her is that she tends to get sucker punched a lot and it felt like she lost most of her fights by the end. She’s great in a fair fight, but villains rarely play fair. Giving her a little extra strength and speed would have been nice, but I suppose she’s technically supposed to be a normal robot. It’s her hand to hand skills and sharp intellect that separate her from the rest so that’s why she would be susceptible to a sneak attack.

Batou is a pretty good supporting character and the best one in the film if you ask me. He likes dogs and feeds the strays in the alleys between missions. He may not be as talented as Major, but he’s probably the next best agent on the force and can handle himself in any environment. He’s always ready to stick up for Major even if it’ll put him in a sticky situation and is just a really good guy. I was glad that he got a pretty large role in the film. The agency had one or two other agents, but they didn’t do much. I suppose they couldn’t fit everyone in, but the film did its best.

Cutter is one of the main villains and he’s a part of the shady government. He’s okay with murdering 100 people if it means he can get himself a new weapon. He’s completely evil the whole time, but does a decent job of hiding that for a while. He’s a good villain who takes himself seriously and has some good plans. He’s not over the top and he doesn’t try and take on the robots by himself. Cutter just thought everything through and he also didn’t go out quietly. Honestly I wouldn’t have minded having him as the main villain for the whole film. He was much better than the hacker.

Kuze was the official main villain. He had a cool design and looked like Starkiller II, but once he took off the mask the character died. He suddenly got emotional the whole time and while it was related to his tragic backstory, it destroyed the mystery of the character. I think the film should have just played it straight with this guy trying to destroy the world or something. That would have been neat.

The film starts off with a lot of cool action scenes and just cool moments in general. Seeing Major lead the interrogation was nice as it shows how you do that without becoming a villain in the process. She got her intel and didn’t have to act drastically. The team respected her authority and she earned it. The second half started to taper off as we didn’t get a lot of action and Major trying to find her identity wasn’t quite as interesting. The whole plot was a little anticlimactic and so we didn’t get a big Terminator esque final fight.

I also didn’t like the doctor at all by the end as she become another Professor Hamilton and just betrayed the heroes. So I can’t say I sympathized much when she was approached at gun point. If I have any real negative with the film beyond the lack of action and muddled plot in the second half, it’s that some of the imagery can just be odd and meant to look creepy without having any real depth. Everyone connected to tower, people thrown in test tubed, experimentation everywhere, etc. Fortunately this film was classy enough not to delve into those things as others probably would. It’s a glimpse at how dark the world is, but the film takes care not to go too far. It’s not violent, but the film has a dark tone throughout. It’s finally another example I can use for how you do a good dark tone.

We also get a pointless filler scene where Major has to poke at someone’s face for a while. I didn’t get the purpose of that at all. How I see it, maybe that was because she was wondering whether she was really different from a robot or not, but I don’t get how feeling it would help. Maybe she wanted to feel like a human, but certainly there are better ways. Either way, the scene just felt like it was there to be there, but it had no real purpose in the film.

I don’t know much about the original Ghost in the Shell anime, but I know it’s supposed to be a pretty deep series that tackles themes like humans vs machines and what a soul really is. This movie didn’t really tackle those topics so I can see fans being upset about that, but since there wasn’t a lot of time anyway, I was pretty okay with it. Especially since at this point we likely all have our views on that. You have a soul? Then you’re a person. Game Set, Match. Robots can’t develop souls, but it’s always a nice hypothetical if they could I suppose. It’s just not something I actually believe can happen. Nothing like that happens here either way, but if it did I could still roll with it since it is a Sci-Fi.

It’s also worth noting that the soundtrack is pretty good here. It’s the classic sci-fi themes that you’d expect. Coupled with the visuals, it really helps you get into the film more than you could have otherwise. The long intro felt like something out of Resident Evil, which despite its many flaws, certainly knew how to be epic. It was also able to do this without showing the title off twice during the opening, but I assume Ghost in the Shell did that in case you missed it the first time.

Overall, Ghost in the Shell is pretty fun and it’s a well done movie. I always like the premise of the elite assassin who goes around knocking people off and eventually wonders if it’s the right job. It’s sort of like Jason Bourne, but in this case Major actually has comrades who care about her and help her along the quest. If I had written the film, I would have added in more fight scenes with killer androids and it would have been a total action blockbuster. After all, the fights that we got here were really good, we just needed more of them. I’d certainly be up for a sequel since there’s still a lot of things you can do with this series. If you haven’t checked it out yet, then this movie is worth watching.

4 thoughts on “Ghost in the Shell Review”