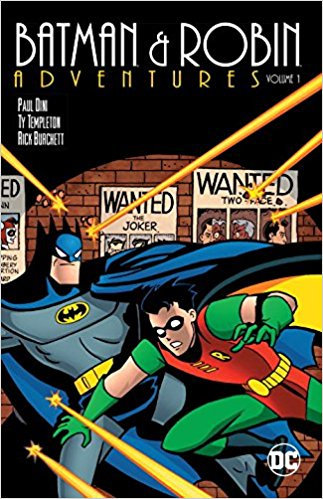 It’s time for some more Batman adventures! Robin gets to be a main character throughout this time which is certainly cool with me. He adds some witty banter to the dynamic and is the only Robin who grew up with Batman for this long so he can call the Dark Knight out if he disagrees with him. The stories are a little more serious than the normal Batman Adventures or at least it feels that way so Batman should definitely be glad that he has the backup. It’s a pretty solid collection of stories that has aged well.

The first two stories make up the initial adventure as Two Face has yet another relapse. He had been close to getting out of jail, but Joker tricks him into thinking that Bruce Wayne has backstabbed him by getting together with Two Face’s friend. He believes Joker of course since he has no reason to doubt the Crown Price of Crime and gets to work on taking revenge against Bruce Wayne. He even managed to kidnap Dick Grayson who had previously warned Batman that he had way too high of an opinion on Two Face. He doesn’t really believe in Two Face’s potential to turn good again unlike Batman. By the end of the issue Batman seems to agree as he finally considers Two Face to just be another thug. It’s a rather dark ending, but I probably agree with it. Two Face is constantly turning evil and I can’t seriously see him ever turning into a good guy. It’s just not who he is. It was a decently fun adventure although I still don’t like Two Face which limits it a little.

The next story had the Riddler return. He finally figured out that Batman had to be a rich billionaire who lived in Gotham to he kidnaps everyone who attended the latest billionaire meeting. Fortunately Batman doesn’t go to events like that and shows up to foil his plans. It’s a pretty straight forward adventure but I have to give the Riddler some credit for piecing the puzzle together. After all it just makes a lot of sense that Batman has to be rich and since there is a whole club for it, it was just a good idea. He may have lost the day, but he ultimately won the war.

After that, the next story was a Penguin adventure. He wants to free the Birds from the Zoo so he is smuggling them back to their homes, but only after they help him get rich. Ah well, there goes his sympathy points. Fortunately Batman is ready for them, but he does have to go through a few birds to do it which wasn’t cool. Batman should have just had some sleeping gas or something which could have stopped them dead in their tracks. It would have been a more peaceful way to claim victory. This was easily the weakest adventure in the collection.

I think the production values took a slight hit in the following story as everyone turns chibi at certain points and the character model is all over the place. Still, it’s a fun Joker comic so it still manages to be pretty good. He has vowed to destroy the Riddler so Batman decides to stop him. The problem is that Joker apparently always gets his man although the comic starts with someone managing to escape him. Batman basically foils him at every turn and doesn’t even let Joker take down any minor villains. I can see why Joker would be upset by the end since it was a pretty rough day for him. It was some nice hype for Batman’s detective skills though and Joker fans should be happy that he came so close.

The next story was another highlight as a magazine reports that Batman has fired Robin. Batman decides not to tell the magazines that this is a lie because he doesn’t deal with reports like that. It’ll all blow over. The problem is that a lot of people start dressing up as Robin and getting into trouble as they can’t handle the thugs of Gotham. This is getting out of hand, but what can they do? You can imagine the fun hijinx that ensues from all of this and the main Robin gets to prove himself once more. My only gripe with this one is that the fake Robins maybe talk a little too tough to Batman and get away with it. Like the one guy who basically threatened Batman not to try and make him go away so Batman just let him come along for a bit. I just don’t think threatening Batman is ever a good idea, but I suppose this guy knew how to make it work.

Back to a bit of a weak story as the Ventriloquist shows up. He breaks out of jail and decides to destroy his Mom so Batman has to really hurry this time. There’s a twist as his Mom is already dead, but he destroyed a picture of her and then shot himself. It’s just a very boring story with an unlikable villain. There’s just no real hook with this villain as he’s about as generic as they come and he’s not crazy in a good way. You can make a crazy villain be entertaining…or you can just make a villain be like the Ventriloquist.

Robin doesn’t look too good in the next comic as he is defeated by Poison Ivy and Harley Quinn and then brainwashed to do their bidding. The whole thing is a little humiliating for him but he gets a lot of hype as even Batman can’t out think him. Robin’s plans are simply too good and it shows that he really has learned a lot over the years. He isn’t the boy wonder that he used to be, Robin is now a true crime fighting expert. It wasn’t really my kind of story as Harley and Ivy rarely make for a great villain team up, but as a Robin fan I enjoyed seeing him get so much hype.

We get a Batgirl vs Talia story which is pretty fun. Batgirl had just been leaving her day job when Talia walked in and took down the guards. This naturally led to a scuffle but Talia proved to be way too strong for Batgirl which is really accurate. I like Batgirl as much as the next guy, but there is absolutely no way that she can hope to take down Talia. Talia is a master at hand to hand combat while Batgirl has just taught herself enough to beat the common crooks at this point. Talia tries her best to defeat Batgirl without destroying her which proves to be as difficult as you’d expect. While the ending is a little cheesy, it had to happen since having the villain actually win in the end would have been a little crazy. It was definitely one of the better stories with quite a lot of action to be found inside.

The final story has Talia return to tell Batman that she wants to stop Ra’s plan to destroy most of the world again. Robin isn’t invited but manages to follow them in secret as Batman unleashes his plan. It’s a pretty fun comic although Ra’s is probably overplayed by this point. His plans also always seem very easy to stop but I guess the strength of them is how well he covers them up. After all, if Talia hadn’t tipped off Batman, nobody would have even known that he was planning anything. He could have leveled part of the world before anyone even knew something was wrong. That’s actually pretty impressive, but once Batman is on the case, you may as well say that it’s curtains for the villains.

The collection is pretty similar to the last Batman one I read, but with more Robin stories which is always a good thing. Ironically despite the title he still missed a few issues here. I suppose that’s just how it goes and he can’t be in all of them but he does make the comics more fun. He finally gives Batman someone to bounce ideas off of and his detective skills are nothing to sneeze at. Batman’s also pretty great as per usual so the heroic duo is really on point.

Overall, I’d definitely recommend this collection if you haven’t read it yet. It’s a pretty good bundle of light hearted action stories and the writing is on point. The art is also pretty good and you’ll really be able to appreciate the designs. Some of the stories may lag behind the others, but I wouldn’t actually call them bad either. Even the weakest of stories can still be fairly decent in its own right. I have one more Batman collection coming up so keep an eye out for that review in the near future.