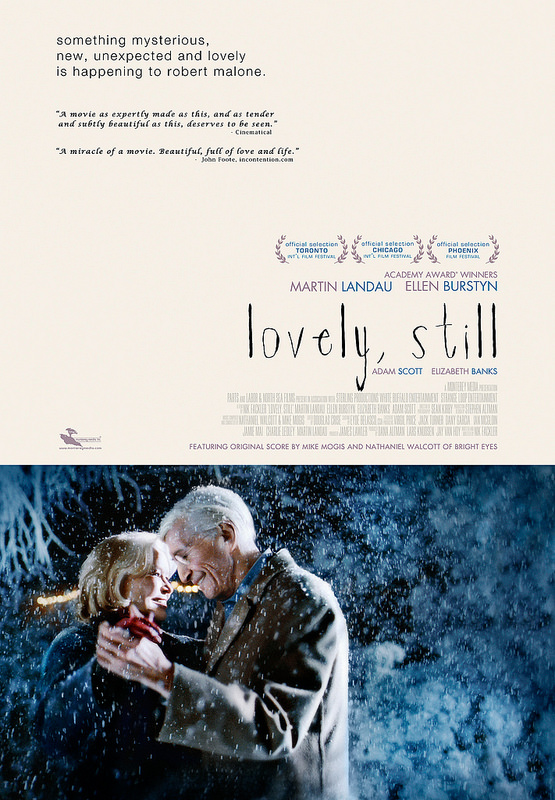 It’s time for a very unique romance film. This one definitely isn’t like most as it’s actually about two senior citizens. You typically expect that people would be satisfied with their current living situation by that age, but I guess not this lead. I’m not a big romance fan and while there are some exceptions, I can’t say that this was one of them. Still, it does have some pretty interesting visuals at times which keeps you guessing.

The film starts off with what is a usual day for Robert. He gets up early to go to work, goes home after work, then he goes to sleep. It’s pretty empty since he has no hobbies, but it is what it is. Then one day he is approached by his new neighbor and she wants them to immediately start dating. She seems awfully desperate, but so is Robert so they quickly get together. Mary’s daughter tries to warn her against this, but she’ll hear nothing of it and Robert asks advice from everyone he knows. Can this romance really work?

Well, as I mentioned, Mary seems really desperate the whole time. That should ring up some serious warning bells for Robert if you ask me. It just never feels like the romance was natural and that Mary was targeting him from the start. Sure, it’s nice to see some initiative from her I guess, but I just don’t know about this. Now, there is a massive plot twist by the end which does help this aspect of the movie. By the end Mary is a much better character than she appears to be. That’s one positive aspect of the twist and it really changes the whole dynamic of the film.

Throughout the film we also get some very random moments where Robert is dreaming and we see a lot of bright lights. It gets very trippy and meta with horror music that you would expect from anime. It’s fun to look at though and while it is pretty pointless, that’s one way to pad out the time right? It makes you wonder what the film is going for so you start having a lot of theories like, what if Robert is actually crazy? It’ll at least pop up in your mind, especially since Robert wrapped himself up a gun for Christmas. He’s definitely pretty unstable.

As for Robert, I’m afraid that I didn’t like him. With or without the plot twist, he’s just not a character that I can get behind. The film makes him appear to be incredibly naive, but he’s an old man right? It’s not like he just skipped his teenage and adult life. This guy should be pretty familiar with life as a whole by this point. Even if we incorporate the plot twist and assume that these parts of his past are foggy, it should also make him aware that something’s not right. So, I’d say that it just doesn’t really add up. He also jumps to conclusions and seems to be rather possessive. In short, there wasn’t really any reason for me to like him. He’s just not a lead that I can get behind and he’s not too grateful to Mike considering how helpful he was.

Mike is Robert’s boss and a pretty upstanding guy overall. He helps Robert pick up presents and even gives him a ride. He shares his intel and life experience with Robert in order to help the date go well. He is nothing but supportive and even then Robert just doesn’t show up to work one day and doesn’t even call out. Mike only found out because he happened to drop by the house. Mike was the best character by a long shot to be honest and easily the most enjoyable character. At first you’re not sure if he will be a nice guy or a really tough guy, but in the end we find out that it was the former all along. He is the comic relief character of the film, but not in the way you’d suspect. He’s not unintelligent or constantly making mistakes. Mike is actually very smart and even has plans on how to get rich. His comedic moments are from his quick dialogue and tips that may not go over so well. He delivers these lines with a straight face though and helps keep this film from being a total romance with no interesting plots to keep you hooked.

While the romance isn’t as bad as a typical modern film where it escalates from 0-10 within a night, I still didn’t like it. Again, romance at this stage is just too late. Even if it wasn’t, it’s just way too corny. Most of the scenes are just hard to watch. The whole time you’ll be asking yourself why these two people couldn’t just be friends instead of dating. If they’re both just lonely and want a companion then being friends makes sense. It doesn’t always have to suddenly get romantic. As a result, I just couldn’t get behind this. As far as the plot twist is concerned, it’s definitely interesting. It definitely adds some tragic elements to the film as well but they aren’t overplayed. It gives the film more depth and as I explained earlier it also makes the romance a little more passable. It’s not enough to save the film or anything, but it was a good twist.

Overall, This is a romance film that really feels like a romance film. Aside from the plot twist the film doesn’t do anything to make itself stand out. I suppose they felt like the gimmick of having the main characters be really old was good enough. While it’s not as if the film is poorly made, this is just a genre that has to be executed extremely well or it simply won’t work. There are millions of romance films and only a small% of them are actually good. It’s also really hard to build up a romance in a single film since there isn’t much time for development. If you watch this film, definitely watch it for Mike’s antics. He’s actually a fun character and his scenes are a blast. Still, you can’t expect one character to hold an entire film on his own do you? He does his best, but it’s not enough. If you want to watch a better romance film….I’m not sure what to tell you. If you want a good emotional film, then I’d recommend watching Dragon Ball Z: Resurrection F. You’ll definitely get emotional when the Earth is targeted!