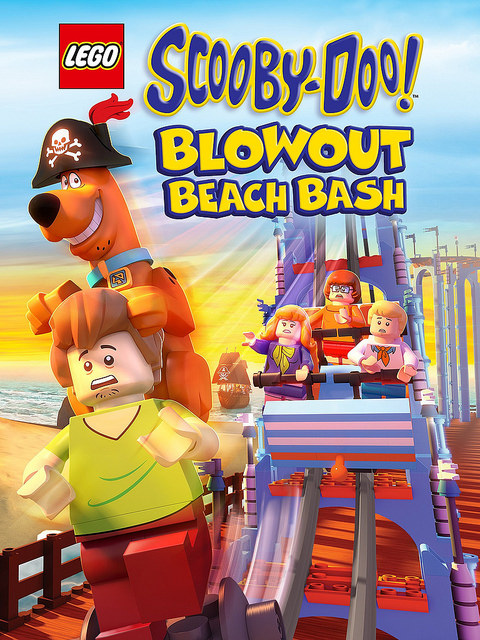 It’s time for another Scooby Doo film. LEGO titles are very popular nowadays and it seems like every franchise wants a piece of the pie. It’s still not my favorite format but it tends to work pretty well with Scooby Doo. The characters can really act crazy here and are just as self aware as ever. We don’t get to see Shaggy and Scooby eat since eating is still very hard to do with Legos, but that’s the only real drawback. It’s a very fun Scooby Doo movie that goes by quickly and I would actually consider it to be one of the better movies in the series.

The Mystery Gang has just finished another case and they are excited for another one, but then Daphne and Shaggy drop a bombshell. Fred and Velma just aren’t fun and they act as partypoopers every time the gang tries to have fun. They take this personally so Velma and Fred decide to prove that they are actually a lot of fun. They will do this by being awarded the King and Queen positions at the big Summer Bash going on in the next town over. Unfortunately, a pair of ghosts have been popping up lately and so the bash might be cancelled. Fred and Velma decide not to help since they are too busy dancing so this time Daphne and Shaggy are going to have to try and solve the case. Can they do it or will they have to ask Fred and Velma for some help one last time.

Right off the bat I can definitely confirm that I liked this plot. Velma and Fred always put the mission first so it’s easy to see how they might not seem fun, but it just means that they aren’t slackers. Let’s be honest here, Daphne rarely takes the mission seriously as it is. She often gets distracted or simply doesn’t care. Shaggy is pretty obviously not into the mission in any of the films. As a result, it’s pretty ironic every time they talk about taking things seriously. As Velma points out in the film, Fred and her do the heavy lifting in every single case. Surely the other members can pull their weight for one case right? Unfortunately not so in the end Velma and Fred are called back into action.

In the meantime, they do prove that they know how to have fun. They come up with a cool new dance and even get the old Captains of the Bash to leave since their attitudes aren’t very good. It does seem like they were always like that though so winning the Bash in the first place was a little suspect but with enough money trading hands I suppose it is possible. As per usual I would say that Fred was the best character here. He took everything in stride and even convinced Velma to turn her tumble into a dance. Then he still had enough energy to help save the day.

The only part of the film that wasn’t very satisfying was the ending. Long story short, Fred and Velma decide to relinquish their titles to Shaggy and Daphne out of pity since those two were unable to solve the case and they also weren’t able to become Captains of the Bash legitimately. I feel like Fred and Velma should have kept the crown since they really did put a lot of effort into obtaining it. It just feels very undeserved for the other two members to get the crown after all of that. Still, the other members can’t call Fred a square after this film.

As you can imagine the writing is pretty solid here. The humor is pretty solid and the characters are on point. The character histories are a big reason as to why this film works in the first place is because of the character histories. I’m still not really a fan of the LEGO animation so I wouldn’t list that as a positive or anything but it works well enough I suppose. I’ll give the film credit for using the animation to its advantage by having their heads fly off and make that an actual part of the dance. Now that is how you work with the animation you were given. With hand drawn animation, of course the film would excel even more but no need to look at the hypothetical any more than that.

Now let’s look at the suspects. Naturally we have the previous Captains of the Bash. They seem determined to keep their crowns so cancelling the Bash would be one way of doing that. There are also 2 ghosts so that would make sense. There are also their parents. While they seem to be a nice pair of senior citizens, they do seem to have given up on the Bash rather quickly and are getting ready to sell to corporate. Perhaps they just want the insurance money?

There is also Mr. Corporate himself. Certainly one of the best characters in the film I might add. He has quite a lot of confidence throughout all of his appearances and isn’t afraid to use his money and position against anyone in his path. There are many reasons why he could be guilty if you really think about it. Corporate doesn’t look out for the little guys. Then there is his secretary. She is very timid and shy. She obeys corporate to the letter but always feels bad about it. Perhaps she has some pent up aggression that has led her to a life of crime eh? The secretary does have one scene where she blows up at corporate, but I can’t say I was a fan of that scene. The random blow out never really works and I’d say it just makes the character look bad for putting everyone on the spot. If you’re going to quit, do it in private later on. At least Corporate didn’t take it personally.

Finally we also have the Sheriff and his deputy. They definitely seem to want the Mystery Gang off the island as soon as possible and they are fans of the ghosts. They are hoping that the ghosts scare everyone away so the town will be nice and quiet again. These guys are rather direct which you may think is too obvious but maybe that’s what the film wants you to think.

We definitely have quite a few suspects here so it’s up to you to try and narrow the list down a bit. The newer Scooby Doo films usually have a lot of fun with the unveiling of the crooks and this one is no different. We get a bunch of twists and it’ll remind you to always suspect everyone until proven otherwise. After all, even the tour guide had something to hide. He may not have been the crook but judging from how fast he ran, the guy may have a previous crime on his record.

Overall, This was definitely a fun Scooby Doo film. Even though it’s the LEGO format I would consider this to be one of the better Scooby Doo films. It definitely captures the core of the franchise and it was probably the first time we had the plot revolve around Fred and Velma. We even got a few songs which were handled well. This is probably one of the first Beach films that I could recommend as well. With the proper blend of humor, action, and plot, this is a film I would definitely recommend checking out.