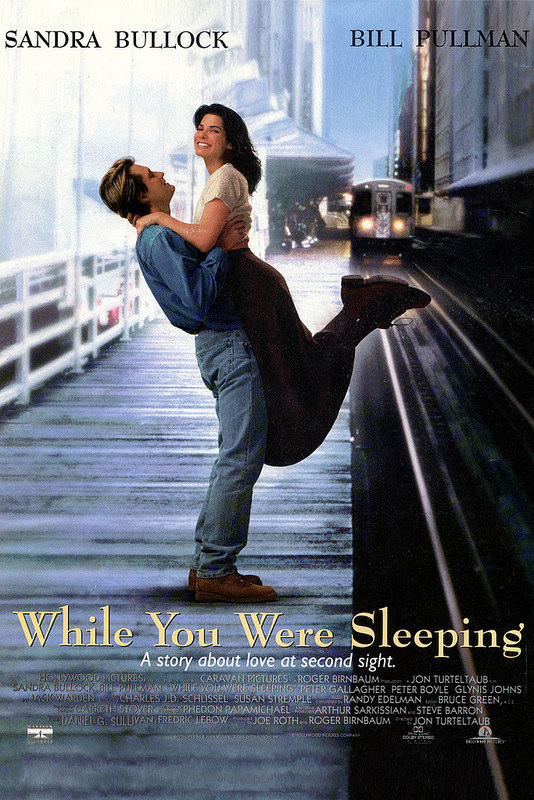 I can’t be the only one who thinks that this poster looks a little off right? It just seems photo shopped a bit with how Bullock’s character is being lifted. Maybe they couldn’t keep the pose up for the photo and had started to fall when it was snapped which caused a little blur effect. Maybe I’m just reading too much into this. Anyway, despite the lackluster poster the film is actually fairly decent. I dare say that this is one of the best romance films I’ve seen and maybe that’s because there wasn’t much actual romance until the end.

The plot revolves around a train ticket person named Lucy. Every day a guy named Peter comes by and deposits his tokens at her booth. She knows they are meant to be together, but they’ve never exchanged a word. Finally Peter works up the courage to tell her hi, but then he is mugged and thrown into the train tracks. Lucy manages to save him and takes him to the hospital. Peter is in a coma, but the family believes that Lucy is the fiancee after a quick mix up occurs. She decides not to tell them the truth because it would hurt them too deeply. Still, Lucy will have to plan things out carefully since Peter will be waking up at some point and his brother Jack is starting to suspect that something is off. Can she keep the secret from him?

So, you can probably imagine that quite a lot of shenanigans and hijinx ensue. Fortunately, they’re handled pretty well for the most part. You can basically tell what is going to happen the whole time, but as one Reddit user once said, virtually all movies are predictable. If anything, you should be worried when something unexpected happens as it may mean that the film has made a mistake in getting to the end. Instead you just want to see if the film executes the plot well. So while this film was predictable, it was still entertaining the whole time with most of the humor being on point and not being generally annoying.

Lucy is a reasonable main character. Saving Peter was naturally the right move and she tried doing what was best for everyone. She probably shouldn’t have tried going through with the wedding just to make everyone happy though. There’s definitely a moral there about keeping your happiness in mind as well. If you try to make everyone happy, but are miserable inside then this clearly isn’t the right path. Not to mention that then she would have been stuck with Peter for her whole life. Lucy tends to get along with everyone she meets in the film and it shows what a nice personality she has.

Meanwhile, we have Peter who doesn’t seem like a very nice guy. I don’t think he’s all that bad to be honest as he just has to sit in the antagonist role thanks to the film’s plot. If anything, he just doesn’t seem to have much of a backbone. He was knocked into the tracks quite easily and got knocked out instantly. That’s not really the kind of moment that will impress you and since Peter doesn’t really recover from this until the very end of the movie there isn’t much reason to like him. Not to mention that he seemed to be having an affair with a married woman which throws any last chance he may have had out the window. It sounds like he abandoned the family and while we never hear his side of the story, there’s not much reason to like him.

Then we have Jack. Honestly, I can’t say that he is a good character either. The main reason for this of course is that from his point of view, Lucy and Peter are together so she is strictly off limits. Yet, he still can’t help but fall for her. I don’t care if she were a super model, the instant she is taken then you have to be able to completely move on. Jack doesn’t actually do much about his feelings and while he doesn’t make a move on Lucy, he’s not exactly subtle either. He should have probably just avoided her until the wedding or something if he really couldn’t get over himself. Of course it turned out okay since the whole thing was fabricated and he ended up with Lucy, but things could have easily gotten troublesome. He’s still much better than Peter though.

The rest of the family is pretty fun as well. Once they showed up I knew we had a quality family going. They quickly pushed the doctors aside and took charge once they saw Peter. They have a lot of fun at the Christmas gatherings and while they bicker and talk a lot, it does keep the place lively. While skeptical at first, they end up taking Lucy’s word on events and seem to be rather trusting. They’re also pretty sensible and don’t hold the whole thing against Lucy. Considering that they are the ones who typically take the rumors and confirm them as fact, it wouldn’t be right to blame her for any of this. As a result, the family was rather solid.

Lucy’s boss was also pretty fun. He did his best to listen to her stories and give some half hearted advice. You could tell that he was never too invested in her situation, but at least he still took the time to listen whenever they had an encounter. He couldn’t quite keep the names straight, but the guy was earnest so he was definitely low key one of the best characters. To counter this, we have Joe Junior who is easily the worst character. The guy doesn’t have much of a purpose in the film other than to create some misunderstandings and to look really bad. Why does the eligible bachelor character always have to be so untidy, unintelligent, and generally gross? By the end of the film things seem to have possibly worked out for him which is nice and all I guess, but he probably could have been cut out and the film wouldn’t change. At least his father was good as he didn’t blame Lucy for dropping the tree through his house.

Overall, While You Were Sleeping is a pretty fun film. The pacing is always quick and so the film never drags on. Given that Romance Comedies aren’t exactly my thing, this one definitely performed quite admirably. If the general premise sounds like fun then I’d recommend checking this film out. You really can’t go wrong here and if you view it more as a general comedy then you’ll enjoy it more since that’s definitely the main focus. It never gets too over the top and most of the misunderstandings are just amped up a little to make the whole thing work. If only all romcoms could be like this one.