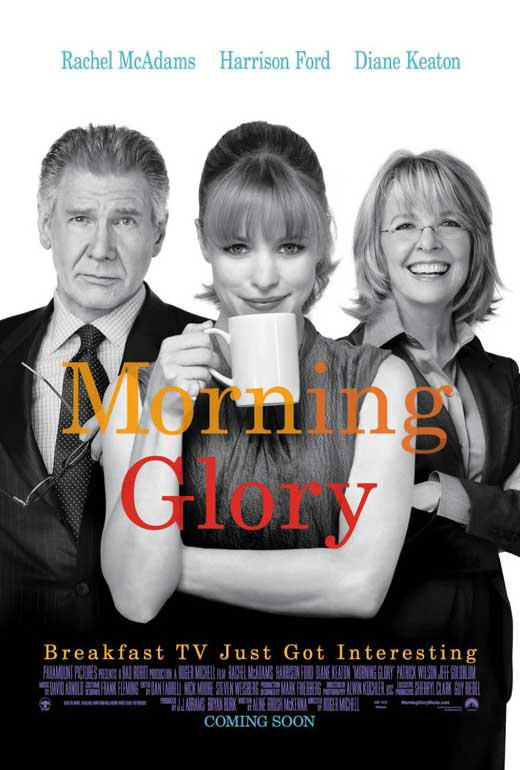 It’s time to look at a rom-com about an early morning news show. I’ve never bothered to watch one myself as if I have to wake up that early in the morning it’s because I’ve got to dash out or have to catch Grand Finals in a tournament. It’s an interesting option though and I suppose it’s good that people have something good and wholesome to watch at that hour. It’s a pretty fun film that had some good potential, but ends up squandering more of it with a rushed romance subplot. Take the rom out of the rom-com and this movie would have been a lot better.

The film starts off with Becky having a good day at work. She has to get up extremely early for her job, but she’s used to it and also enjoys it. Unfortunately she is fired due to corporate wanting to cut down costs and adding someone in from outside the company. Fortunately Becky gets hired by another Early Morning show, but this one has really been under tough times and will soon be cancelled. She has to get the ratings up very quickly or she will be fired once again. To do that she will have to switch up the daily routine of talking about nothing and getting the station to report real news. The first step in this process is bringing back Mike from his unofficial retirement.

Right away Becky is introduced to the politics of the workplace. It’s handled pretty realistically with all of the unwritten rules about who you can and can’t talk to depending on the situation. It really depends on where you work of course, but there are always intangibles to get used to and then the work will go smoothly. Alternately you can try to be oblivious or just boldly ignore the rules and have fun. Work should be fun so just keep that in mind and the rest will fall into place. Becky notices that some of the workers aren’t actually working and that’s part of why the show is going downhill. As such, her first order of business is to fire someone. After that she looks for Mike.

See, Mike is actually hired by the company, but he refuses to work so he is currently earning 6 million dollars just to stay at home and play golf. I forgot that TV reporters are paid so much, but either way it is crazy to see a company effectively throwing away 6 million dollars on someone who doesn’t work. That’s probably the most unrealistic part of the movie if we’re being honest here.

Becky has to use some extreme measures, but before long she gets the station back in shape. She did a really good job of growing into the position considering that she jumped from entry level into being the big boss instantly. That shows how desperate the company was, but also that she had the talent for it all along. The end of the movie is a little iffy though. She is offered a position at a better company where she will be making significantly more money. It’s always a tough call of course, but do you go with the job where you were very close to being fired and have absolutely no job security, but get to hang out with your friends, or go for the big bucks? I don’t really think the latter choice is wrong in this case, but of course it’s ultimately her choice. I do think if you like a job enough then the pay doesn’t matter much, but I certainly do factor job security into that.

The only weak part of Becky’s character is the romance with Adam. So, Adam shows up out of nowhere and they immediately hook up. It’s especially odd since she was only around for like a day and had a pretty big position in the company but he didn’t care. The guy’s a freelance worker, but still, I’d figure that you don’t hit on the boss day 1. My mistake. This romance is just so terrible through and through. Adam is the personification of bad advice as he tries to tell Becky not to take her job too seriously and throws her phone in the fridge so she can’t use it. Even by the end he’s a bad influence and he never got to be even a remotely good character. The romance alone took this film down 2 stars as it was just soooo bad. It’s also basically just an excuse for fanservice as otherwise the film had played it straight. Well, we did have the guy who got fired and his unnecessary gimmick, but at least that didn’t last long.

Mike is portrayed as a really unlikable guy who is super stuck up and the film succeeded on that angle. It’s impossible to root for this guy and the only reason he shows up at all is for the money. There’s nothing heroic about this guy and he just brings in a bad attitude to the company the whole time. He’s an entertaining character of course, but strictly as the villain. I don’t really buy into the cheesy turnaround at the end. Heroic or not though, he is probably the most entertaining part of the film.

Then we’ve got Colleen who has lost all faith in the show and believes that Becky is doomed. I guess this is for good reason since apparently none of the other bosses did very well. At least she was the most open to trying new things though. Without her the show wouldn’t have had a chance. Not much more to say about Adam than what I already covered so we can skip this guy. One of the worst characters in the film. Then we have Lenny who has been with the company for ages, but decided not to move up. He likes his current job since he doesn’t have to work at all and lets everyone else take the risks. Definitely a smart character since sometimes going up isn’t necessarily the best thing to do. Then there is the big boss Jerry. The actor always does a good job of just talking nonstop without taking a breath and that’s what makes the character fun. Jerry doesn’t actually get to do all that much besides that so it’s more of a glorified cameo appearance than anything. Still a very fun character.

As I keep mentioning, the film was just a lot of fun. The writing isn’t amazing or anything, but it manages to deliver on a lot of the jokes. The film doesn’t drag on either so the pacing was well kept as well. The first half does beat the second, but that’s how it is in almost all rom-coms as the second half gets a little more serious since the film has to wrap up at some point. It never gets too weak though, it’s just that the romance scenes really destroy all of its momentum. If you enjoy rom-coms then you likely won’t mind the scenes much so they shouldn’t really impact how much you enjoy the movie.

Overall, Morning Glory is a good ride through the world of TV Broadcasting. The film manages to get quite a few big names in it. Certainly more than I would have expected. The plot is fairly unique and I do like how for once the main character didn’t mess everything up. The trope here is usually that the lead is in over her head and by the end of the film learns how to be a great leader. Here, Becky knew what to do from the start and just kept making the show better and better until it finally surpassed its limits. That’s the kind of main character you want to have. She was almost good enough to save the film.