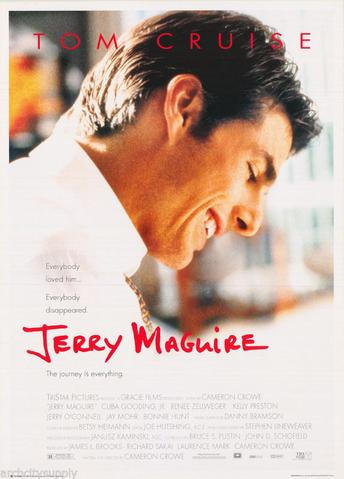 It’s time to look at one of the oldest Tom Cruise films. This was back before he was climbing towers and taking down whole organizations in the MI series. It’s definitely very different from his other movies. This is a fun one but a film that also has its share of flaws. It’s time to look at a day in the life of Jerry.

Jerry is a great sports agent. He’s always been able to snag his athletes and get them to sign him on for the big money. Thing is, his company helps so many people that they don’t get quality face time with their agents. Jerry decides that things need to run a little differently around the office and releases a memo that they should treat the players better. He is quickly fired as a result and Jerry decides to start his own business in response. One girl from the office, Dorothy, decides to go with him. Can they succeed against such a big company?

The sports part of the film is definitely its strong suit. The montage of Jerry trying to contact a bunch of players was a lot of fun even if most of them wouldn’t come through for him. It’s so well done that you even don’t mind the rival who is definitely the antagonist here. The guy makes for a pretty solid villain overall. He has a lot of confidence and certainly a good amount of connections as well. Deciding to fire Jerry at a cafe was also a smart move to endure the lead wouldn’t fight back. It’s under handed for sure, but I’d expect nothing less from corporate.

Meanwhile Jerry is just a fun character to have in the lead as well. He is great at bluffing and acting confident even when that is certainly not the case at all. He certainly made a memorable exit when he was leaving the company and lived up to his own memo about giving his players a lot of face time. Jerry did his best to be fair. Where he falters is in the romance angle. He was already with someone prior to the film starting so you know that she is going to lose out to Dorothy. Usually the films either make the old flame super mean or super nice depending on if they want you to be sympathetic or not. In this case I think they were going for the former but it didn’t work. The lady was brutally honest at times but she was also dependable and just seemed like a solid character. She was also willing to make the relationship work but Jerry was adamant about them breaking up. Keep in mind that later on he talks about the exact opposite since he is apparently no quitter. It was hard to believe him by that point. At least she hit him with a nice combo before leaving.

As for the romance with Dorothy I naturally couldn’t go for it. Of course they couldn’t simply be professional co workers who were friends without taking it a step further right? It had to be a cliche romance. It’s unfortunate because it continues the narrative that you can’t stay friends in such a scenario. It also escalated quite quickly and the actual scenes take way too long. They drag and drag as they pull down the film’s score.

Then we have Dorothy’s kid who is super annoying. He is basically just around to get everyone in trouble and/or guilt trip them. He hangs up the phone on Jerry’s biggest client which turned out to be okay of course but if he client had taken offense and left that would have been it for Jerry’s career. Everything works out for the kid of course but he puts himself into a lot of bad situations so it’s hard to really feel bad for him. His emotional scenes also don’t work so basically any scene with him out the film to a halt.

Meanwhile with Dorothy herself she wasn’t a bad character but not a particularly good one either. On one hand I do appreciate the fact that she stuck up for Jerry by leaving with him even if it wasn’t the most financially responsible thing to do. She made a stand and stuck by it. She was supportive through the company’s tough start and put in the work. Then the romance set in and that was that.

Let’s talk about the best character here, the football player. He is very loud and always talking but the important thing is that he speaks his mind. No one ever has to guess what he is thinking because he will spell it out for you. He is trying to make sure he secures a good future for his family while at the same time working on his game so it’s tough. He is taking a gamble on Jerry the same way that Jerry is getting everything on him. Both characters have a mutual benefit here so naturally they stick together quite closely. Jim is a good friend to have and without him Jerry would have been doomed right from the start.

It was also nice to see the Cowboys dominating the competition in the climax as well. The movie quickly cuts away before the Cowboys steal the win to spare Cardinal fans the tragic flashbacks but from the scenes in screen you can probably tell that they seem to have the edge. The Cowboys were a very intense hard hitting team back then and didn’t lose many games.

Overall, This was a pretty fun film but the romance did hurt it quite a lot. Those scenes would be quite painful and take away from the really fun first half. Considering that this film was handling a lot of genres I’d say that it did pretty well. If it took out the romance drama and focused on the sport comedy part it would have been a lot better. As it stands I would still recommend checking the film out. It does feature the iconic Tom Cruise run near the end which I was starting to think actually would not make it.