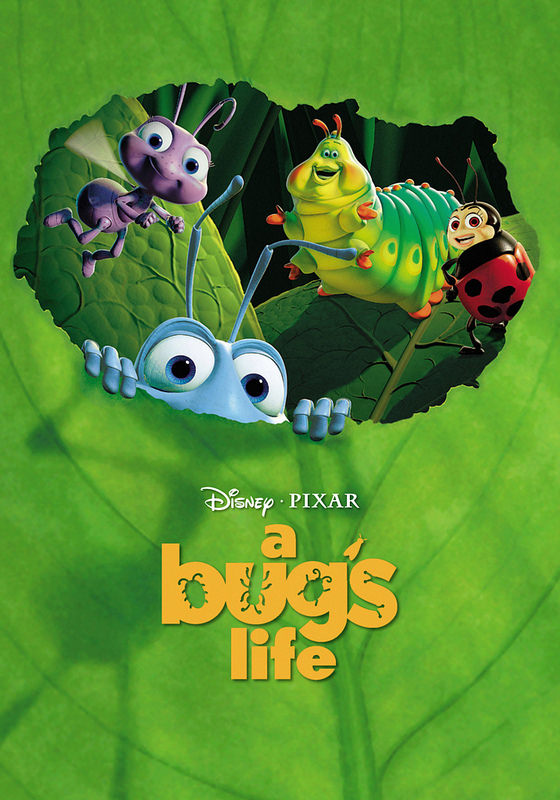 Lets look at a Bug’s Life. The film itself is nothing all that special compared to some of the other big animated films of the last decade, but it’s still a quality film. It doesn’t really do anything wrong and will keep you engaged from start to finish. It’s a fun adventure with good pacing, but you will get the feeling that it’s just lacking something. That extra impact to raise the film from a solid 7 to a great 8. I don’t know what that something is though so maybe the film would bring it for a sequel.

The plot starts by introducing us to the Ant pack. These guys are very strong in number, but they are rather passive. They aren’t even confident about going around a leaf without being told how to do it by one of the elders. Their own insecurities have led them to be tamed by the Grasshoppers even though the Ants badly outnumber them. Flik decides that Ants shouldn’t be working for grasshoppers like this and has begun making inventions to help make their lives easier. Unfortunately his inventions often backfire so he is convinced to leave the tribe under the pretense of recruiting powerful allies. That’s when Flik discovers a circus of powerful creatures and realizes that this is his chance. Will the performers want to help? Even if they do, can they possibly win against trained Grasshoppers?

It’s a fun enough plot. Naturally when a film is based around animals this can get pretty dicey but the film never goes that route which is fortunate. You wouldn’t really expect animal violence in this film anyway but it’s always good to have confirmation. The Grasshoppers make for pretty good villains. Some of them are even pretty vicious like the leader, Hopper or the one who is always foaming at the mouth. It makes for intense visuals and you do realize that the Ants are doomed in one on one fights. Even as a team they better have really good combos because otherwise they would be wiped out. The leader of the Grasshoppers is also the kind of villain who doesn’t give up easily. Even at the end Hopper was trying to reclaim his dominance at the top of the food chain. Unfortunately he ran into the best character of the film and one doesn’t often walk away from such an encounter. It was actually a rather vicious end for the guy.

If the film has a weak point, it would be that most of the characters aren’t all that engaging. I didn’t really care for anyone from the circus. The Ladybug who talks tough never actually acts tough when it’s climax time so he’s out. The others didn’t even try fighting at the end even though some of them look like they should be able to put up a good fight. They were also quick to walk away with the circus owner although I won’t put too much blame on them since the Ants did not want them. That brings me over to the Ants. The Ant Princess is definitely not a quality character and her plans are no good. Even after she figures out the main character’s deception, why send the circus troupe back? They definitely don’t have enough time to meet the Grasshoppers’ demands now so making do with these guys was her only option. Instead she just puts the Ants in a position to be ganged up on and eliminated. As the leader she needed to make a better call. The ex leader, aka the Queen wasn’t great either. She didn’t really do anything the whole time and was content to be on the sidelines. That’s not leadership material either.

As mentioned before, this doesn’t apply to the villains though. The Grasshoppers are certainly quite intimidating and the leader knows how to control his pack. If they dare cross him then they must take a punishment. He’s also bold enough to be surrounded by Ants and not care. If only the Ants were as brave. I haven’t talked much about the main character, but I’m afraid that he’s not very good so he fits in with the Ants. Even when the villain threatens to destroy one of the kids Flik backs up and decides to keep the peace. That’s definitely not something that any true main character would do. If you won’t stick up for your friends then you can’t be a hero.

The graphics aren’t bad. All of the character models appear to be on point. It definitely has more jungle type landscapes than the average film since most of it takes place in a grassy environment. There isn’t really much of a soundtrack though so don’t expect any great tunes to jam to. The writing is pretty good with a sound script. None of the characters seem over the top, at most they are just very naive like the average Ant. It’s almost hard to root for those guys since the Grasshoppers just seem a lot smarter and more strategic. The Ants have every possible advantage if they would just use it.

Overall, A Bug’s Life is a good film. It reminds you of the strength in numbers tactic and that you can’t submit to another species without a fight. If you haven’t seen this film yet then I would recommend checking it out. It’s a solid adventure film with a bit of action which makes for a pretty solid combo. Maybe one day these characters will show up in Kingdom Hearts. The movie doesn’t really leave any cliffhangers as it’s a complete ending but you could easily follow up on it by having another species decide to move in when they hear that the Grasshoppers have fallen. There are a lot of possibilities there.