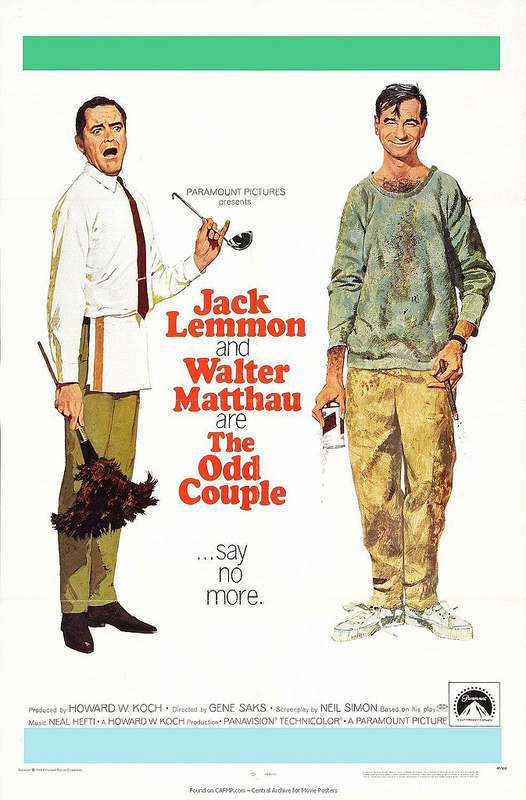 It’s time to look at the original Odd Couple film. The TV show was always pretty fun but how would the movie fare in comparison? Naturally you aren’t going to go in expecting it to beat the actual show but if it could still be a fun adventure and work as an episode then that would be a success. I can safely say that this was a pretty fun movie. It’s definitely aged well and the concept is timeless.

The film starts off with Oscar having a card game with his buddies as per their weekly routine. Initially I actually thought that one of the friends was actually Oscar since he was certainly pretty confident in his chair and smoking to boot. They’re all having a good time until they realize that Felix has been out a while and may be trying to destroy himself. Fortunately that guy managed to pull his back so now he was unable to do it and makes it back home. Oscar realizes that Felix can’t be by himself for a while so he suggests that Felix moves in and then they will be roommates. Felix agrees and so their story begins. However, Felix may prove to be a bit more of a handful than Oscar ever could have imagined.

Right away you may be on team Oscar here as he was willing to make a pretty big change in his life just to help Felix. He was perfectly content living by himself and only did this because Felix still seemed to be a bit crazy. He’s also quite patient with Felix’s antics. Felix chases off all of Oscar’s friends, makes him miss the big moment in a Baseball game, is embarrassingly loud at restaurants, cries a lot, etc. Oscar is able to look past this since he does want to be a good friend. Oscar’s not perfect and he’s certainly not the cleanest guy around, but he always seems pretty reasonable.

Then we’ve got Felix. He’s a lot harder to sympathize with since Felix ends up taking everything too seriously and just makes things way too difficult for Oscar. Some things just feel deliberate like his allergies. Even if his method is effective, he just comes across as too socially insensitive. Felix either doesn’t realize that half of the things he does are so extreme or he doesn’t care. Both options don’t really help his case all that much. So when the two characters inevitably fight and Felix thinks about moving out you have to admit that it’s the right call. If the bridge can’t be mended then at the end of the day it is still Oscar’s place and he can make living there pretty uncomfortable for Felix.

The film goes at a pretty good pace. Some scenes may be a little long like the opening where the main characters think that Felix might die though. It went on for such a large chunk that I was wondering if the film’s main story was going to include those friends the whole time. It’s a fun scene all around though so maybe the length was necessary to ensure the writers could throw all of the jokes in there. I wouldn’t have minded seeing more of the friends really. They seemed decently nice even if they were on the completely opposite side of Oscar in how tolerant they were of Felix. They didn’t even give him a chance.

I’d say that the writing is pretty solid as well. The characters are mostly reasonable and the contrast between Oscar and Felix is depicted well. You can almost instantly see how the dynamic will play out because the two characters’ traits can be guessed as soon as they appear. If there is a weak point in the movie it would have to be the part with the Pigeon sisters. They aren’t all that entertaining and are probably the most exaggerated characters. They laugh at everything and seem like rather odd neighbors for sure. the “romance” angle here is mostly just used for comedy as you know Oscar has no shot as long as Felix is around. While the scene does give Oscar a big reason to finally leave Felix for good it could have been done another way.

The climax is also why Felix certainly couldn’t end up being a good character for me. Timid or not, he totally deserted Oscar there when the main character needed him the most. When you start something you gotta see it through and Felix did not. As a result he basically betrayed Oscar. This gets even worse in the ending where we find out who he ran to while making everyone else worry. Felix is a humorous character so I’ll give him that. The guy has his moments, but when the chips are down he is someone that you absolutely cannot count on. He will let you down every time.

As far as the soundtrack goes there is really one big theme, but it has certainly gotten iconic over the years. The TV show remixed it a bit, but if you’ve seen the show you will still recognize the theme as soon as it shows up. It’s a pretty good slice of life theme and adds some atmosphere to the first scene of the movie. Based on the beginning you actually may get the wrong idea about the genre for a little while which is nice. The film did a good job with the misdirect there which really started the film off on a good note.

Overall, The Odd Couple is a pretty fun film. The jokes are well delivered and the dynamic between the main characters works well for this kind of plot. Oscar is definitely the guy I was rooting for as his more laid back approach just makes him a lot easier to get along with. Still, Felix isn’t as bad as he could have been as with these kinds of films one character usually ends up being super unreasonable. Felix doesn’t falter much until the end of the film. If you haven’t seen this film yet then I’d recommend checking it out. It’s just a pretty balanced movie that makes for a good watch.

2 thoughts on “The Odd Couple Review”