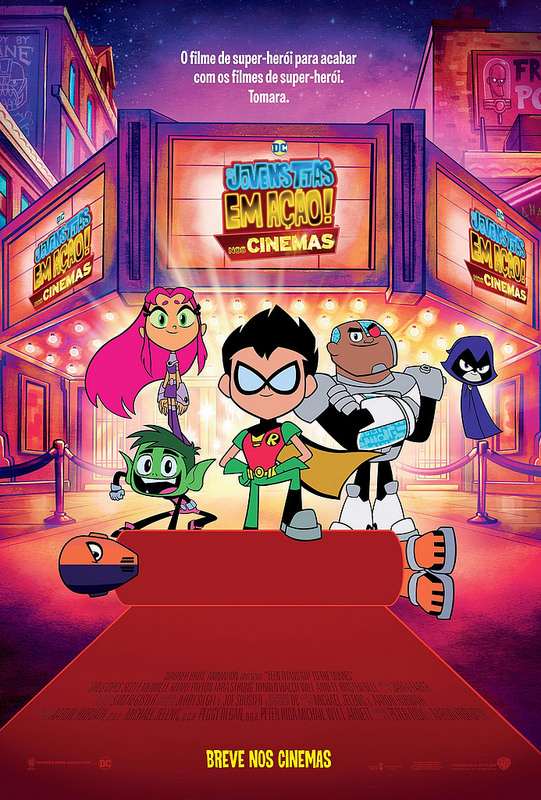 It’s time to look at the Teen Titans GO! movie that came out recently. I’ve watched the show ever since its beginning and it’s always been very hit or miss. It can have some decent episodes and then it can have some truly terrible ones. As a result the show is leaning towards a negative rating at the moment, but of course things can certainly change by the end. With a film I figured the writers would try to be on their best behavior and come up with a good story so as not to embarrass its viewers. Well, the movie is a considerable step up and I can happily say that it was a quality movie. I was worried for a little while, but it all turned out okay.

The film starts with the Teen Titans being mocked by the Justice League. While Robin and co. aren’t thrilled about this it’s hard to deny that the League have a lot more going for them. They’ve got big budget films on their resume while the Titans haven’t got a clue. Robin decides that the only way their group will ever be respected is if they get a big budget movie. They head over to Jade Wilson to plead their case but she explains that she’ll never make a film about them. The only way around this is if the Titans can get rid of all other heroes or finally get an arch nemesis. Both options will be tough for these guys, but Robin knows that it’s time to step up. Can the team do it?

Slade gets a pretty big role here as you’d expect since he is easily the Titans’ most iconic villain. This film is the first time they’ve met in Go continuity so it was nice to see him arrive. He’s played in a much more comedic light here as you’d probably expect. It may take a little while to get used to him since his “Mind Manipulation” gimmick isn’t quite as humorous as most of the other Titans. Still, he does give us a pretty good twist by the end (Well, if you’ve read the comics you might not be fooled but the twist works to an extent regardless because there are two routes that the movie could have went with) and he can certainly fight. I was glad to have him on board here.

Where the film excels is naturally in the writing/humor. See, typically the issue with the series is that the humor is cringy instead of funny. Usually it’s very crude or just flat out gross. This film rarely goes there and instead the humor is in how crazy the Titans are and how unprofessional the team can be. A good example of humor is how the Titans go around preventing everyone’s origin. The humor can also be a bit dark in how they have to murder some people without going too far into dicey territory. As I mentioned the only gag that drags on is Slade’s. (Saying his name gets old as well) When Slade isn’t around the rest of the humor is fast and to the point.

I also liked the film’s soundtrack. Some of the songs were meant to be parodies of course, but they still worked very well with or without context. Robin’s song about being a real hero was awesome. Likewise I really enjoyed the Teen Titans opening song that was also used during the climax. It’s really impressive just how good the song is honestly. It’s the kind of song you could actually listen to in a serious context and still enjoy it. It helps that the graphics for both scenes with the song were quite impressive. It started the film out on a high note and right away you could tell that it was a bit of a step up from the show. Even the animation was quite on point here. While the style isn’t really different from the show, there is a lot more movement so I imagine that the animators had to use many extra frames. It allows for better visual gags and some nice action scenes as well. On a technical level the film had no issues and since the writing was solid as well you can see how this film got off on the right foot.

As far as the main characters go, Robin is certainly the best hero just like you would expect. He actually knows how and when to get serious unlike the rest of the heroes. He got the team their opportunity to get a movie and didn’t mess it up unlike the others. He really wants to be a good crime fighter and is just held back by the others. I’d go as far as to say that without the others he would have already had his movie. Still, he’s pretty patient with the other titans and has all the qualities of a good leader. Unfortunately the other four don’t look very good here. They actively try to wreck his movie in a fit of jealousy and rage. You could argue that it is quite personal since right after Jade tells the Titans to stop goofing around they immediately did the opposite. I think the implication here is that they didn’t like the way she said it, but it’s still awful petty of them. Cmon now guys. You really feel bad for Robin the whole time and even if he does get suckered by the end you can’t blame him for trying. This was his life’s dream and he may not have gotten the opportunity again otherwise. You go Robin!

Another strong area in the film is its ever changing plot. While getting a movie is the main focus of course the film goes into a few different segways where you think it may spend a lot of time doing something only to refocus. A good example of this is the heroes deciding to go back in time to change the superhero origins of the League to replace them. You’d expect this to be the bulk of the plot in any other movie but here this montage only lasts for a little while before the Titans go with plan B. I think that plot could have been its own movie as well, but the film could have potentially locked itself in a bit since then it would become a bit more predictable as to what would happen next. It still worked for the quick gags though. There’s just a lot happening in this film throughout and it has the kind of energy that you want to see in a movie like this. It embraces how crazy it is and ultimately ends up being the definitive comedy DC film.

Of course this wouldn’t be a true comic book film without a post credits scene right? It hints at a future project to come if you take the scene at face value. Honestly I wouldn’t have taken it very seriously myself since it would be the ultimate gag to get everyone’s hopes and dreams up. Of course, we do have a rumored crossover film coming up which is similar to a direct sequel so I guess in a way that does lend some credibility to the scene. Regardless it is a pretty fun scene though and one that I’m sure you’ll have fun with.

Overall, Teen Titans Go! really surprised me with this one. The humor is just so much better than you would have expected based on the show. We’ve gotten glimpses of what the show could be like from time to time, but to actually pull this off for over an hour straight? I couldn’t help but be impressed. Aside from the Slade humor being a bit weak I can’t think of any negatives for this film. Even if you haven’t seen the show before now I highly recommend checking this film out. It’s just a lot of fun and all you need is a basic understanding of DC comics or at least the comic book movie industry to really get into what’s happening here. Who knows, maybe you’ll be able to accept Robin as a real hero!