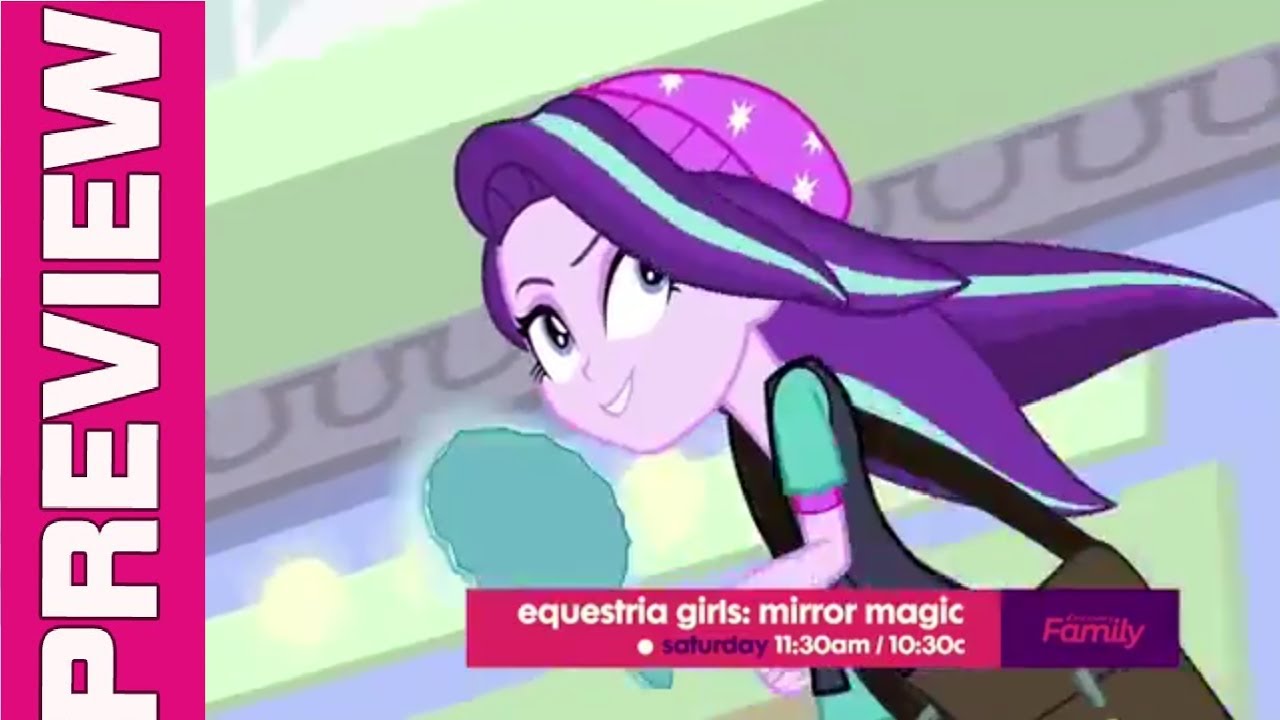 It’s time to look at the big climax to the trilogy! The Mane 7 have gone to the theater to see how the film went. Naturally it was quite good, possibly the best film they ever saw. The heroes are pretty nice people so they don’t want to make a big deal of this, but then they see that Juniper is working here and decide to pay her a visit. After trying to sabotage the film, Juniper was fired and forced to work as a sweeper at the theater. The Mane 7 remind her of this and let her know that it’s what she deserves. Juniper decides to get back at the heroes and finds a mirror. With it she can throw people into other dimensions and even finish her chores quicker. She slowly begins to use this mirror more and more until she is completely hooked on it. Now she does not want to ever turn away from it. Why should she when this grants her super abilities?

Sunset realizes that she’s going to need pony power for this one and calls up Starlight Glimmer. Together they can succeed where the Equestria Girls failed. Juniper may have magical abilities, but the heroes have the power of friendship on their side! The big battle between good and evil starts here and it will definitely ensure that you never look at the characters the same way again. It was nice to see Juniper get a super form here as the other specials had been pretty down to Earth. Seeing the characters go cosmic again was definitely a blast.

Meanwhile, Juniper is a pretty fun villain here like in the other special. I do think that it’s basically impossible to sympathize with her at all. Considering how many crimes she committed in the last special, you’d think that she would be incredibly grateful to be working anywhere right? Instead she spends this time griping the whole while. She’s clearly very bitter about everything and hasn’t learned a thing in her exile. By the end we find out that she just wanted friends, but I’m not sure that I buy this. There was certainly no indication that this was the case until the very end. I think the heroes basically tricked her into believing that this was the case.

I do think Starlight Glimmer was pretty out of character here though. This seems to be the case a lot of the time when the Ponies show up in Equestria Girls though. Starlight acts like a complete beginner here. She isn’t very powerful or confident which isn’t like her. She gives some advice here and there, but spends most of the time just staying in the background. She could have been cut out of the film and nothing would have changed. That’s my main problem with the whole thing. Starlight should have been brought in to have a big fight with Juniper or something. Otherwise why even show up? Still, at least we finally got the big meeting between the two characters even if it was handled poorly.

All told, this trilogy ended on a pretty high note. The writing was good and the special’s short length really allows for the action to start up right away. I still say that Starlight was misused here, but you can’t win them all I suppose. The mirror was a good piece of tech so hopefully it shows up again. It could easily be used for a bunch of different plots which would certainly be fun.

Overall,, I have finally finished all of the Magic specials. With this I am one step closer to catching up with the MLP series. That will certainly be a pretty big milestone. If you haven’t seen these specials yet then you should do so. All 3 of them combined are barely an hour so you really can’t go wrong there. The low key best character of this is probably still Juniper’s uncle. the guy really did his best to help her turn over a new leaf. It’s just a shame that she persisted in staying with the darkness. At least now that she’s friends with the MLP characters she’ll have positive influences. (Provided they remember to check up on her from time to time)