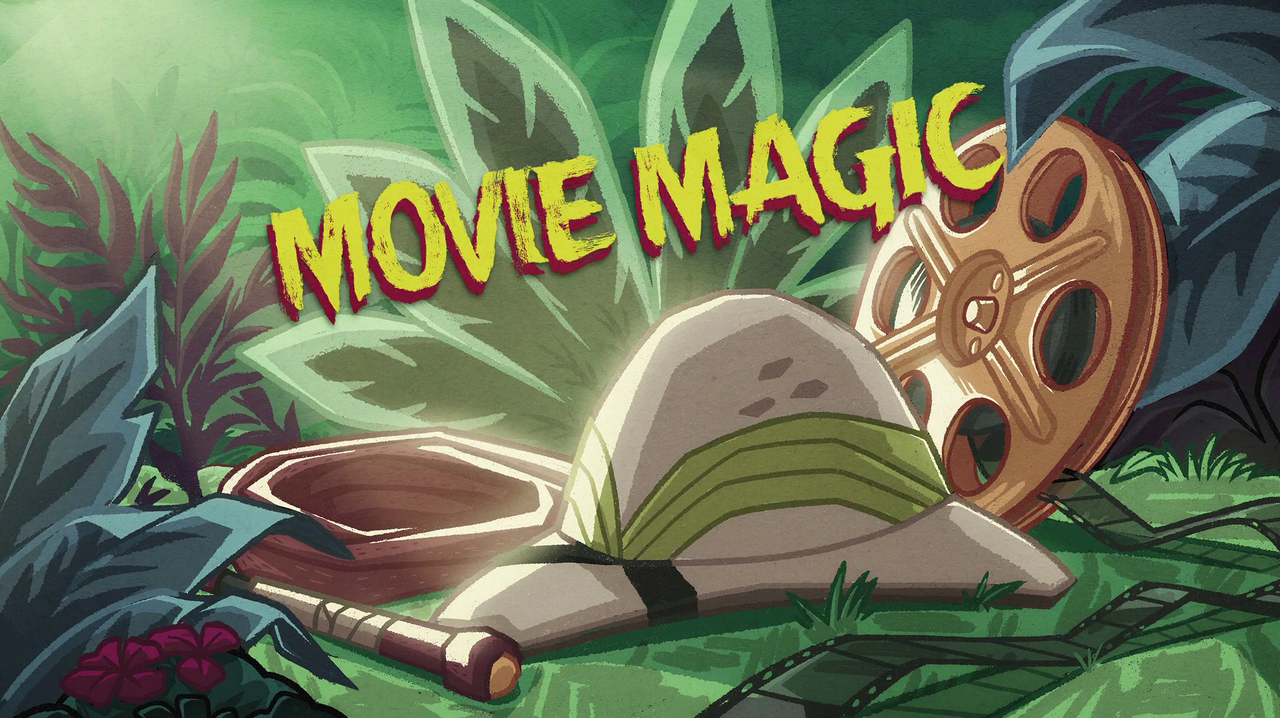 It’s time to look at the next installment in the Magic trilogy. The heroes have arrived on the set of a Daring Do movie and are looking forward to seeing it be made first hand. As Rainbow Dash is a big fan she is determined to help the crew do it right. Unfortunately a ghost has been scaring people off the set and now even the props for the movie have vanished. Without those the movie will have to be put on indefinite hold. Dash can’t have that and so she decides that the group will find this ghost. She even brought along her super speed amulet so she can take this villain down a few pegs. Still, will that be enough to defeat an actual ghost?

This really plays out like a classic Scooby Doo film. It’s pretty neat to see how the MLP crew would handle such a task. Of course, it is a bit obvious who the culprit is from the start. I think the one area where the special made a mistake is in only having a small cast around. From those characters only 2 of them feel like actual suspects. You have a spoiled actress who keeps saying that she wants out of this film and then you have a movie attendant who really loves being in the film business. Hmmmm, who’s the likely culprit? Well, the actress would be the obvious guess since she doesn’t like the movie, but through that you know who is actually guilty. Still, even if you know who it is the actual mystery is still pretty fun.

I do think it was a bit of a stretch how the villain outran Rainbow Dash though and then captured her. Rainbow Dash isn’t a normal human like the rest of these characters, she has actual super speed? The whole thing felt like plot hax to be honest. Still, it did add a little sense of danger which is always good though. The team’s plan to capture the villain was also pretty well thought out. It just goes to show that the ponies have brainpower as well as brawn.

The ending was handled pretty well as the villain starts to go through the motions of pretending to turn over a new leaf and all of that. The director doesn’t buy into it and wants the person off the set. This time the culprit basically gets off with a slap on the wrist, but I guess it makes sense since this character is likely still a minor and as such can’t do a whole lot of hard time anyway. She’s banned from the set and that’s really all you could ask for.

From what we saw it looks like the Daring Do film will be a riveting success. I was half expecting the actual Daring Do to show up, but I guess she could have ended up stealing the show. Surprisingly there aren’t any real songs here, but I suppose maybe that would have been out of place with the whole mystery angle going on. I’d say that the first special beat this one as a result, but Movie Magic certainly did have a little more danger and suspense in the plot so it was pretty close. There’s not much to say about the graphics as they are effectively the same as in the first special.

Overall, Movie Magic is a good follow up to the first special. The main characters are a pretty close knit team by this point so it’s nice to see them making plans and such to catch the enemy. The villain was also fairly memorable and made for a good antagonist. I’ll talk more about her in the final special review. The 2nd special in a trilogy is usually more for set up than anything else and that’s exactly the case here. The third special is where everything finally connects and we learn who is really pulling the strings here. Lets just say that everything has been leading up to this moment.