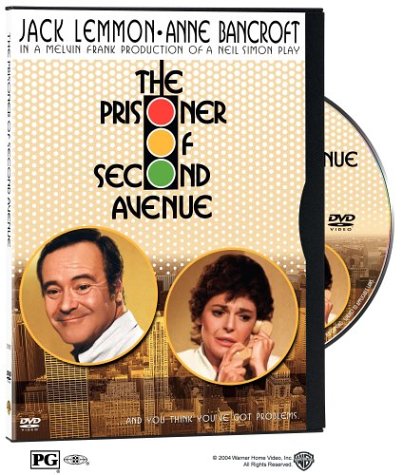 It’s time to look at a fairly old black comedy film. It’s one of those films that has a pretty solid premise and starts out good. Then the film unfortunately falls off the deep end and never quite managed to recover. You sort of know where the movie is going with this before it gets there and it’s not the direction it should have gone. The film just isn’t all that satisfying and at the end of the day the characters do end up being prisoners of second avenue.

The film starts off with Mel losing his job. It had been a steady job that he had for many years, but that is all over now. Adding to his woes is the fact that someone broke into his house and stole all the clothes, money, and items. His wife Edna is distraught as well, but she manages to keep herself together. She even gets a job to support them while Mel looks for one. The problem is that Mel can’t seem to find a job anywhere and so naturally he gets jealous of Edna’s success. Mel decides to guilt trip Edna about this every waking minute and quickly loses his mind entirely. Edna will have to do what she can to bring him back from insanity, but can she pull this off?

Mel is really what drags the film down here. A lot of unfortunate stuff happen to him for sure, but his reaction to all of it certainly isn’t all that good. I think him losing his mind goes a little too far. It gets to the point where he starts swinging a knife around and yelling about global conspiracies. It stops being funny pretty quickly and just goes into being very tedious/annoying. I couldn’t wait for him to finally get past this. It happens when he mugs someone on the street and steals his wallet.

That’s when the film decides to double down by having Edna lose her mind. It’s the film’s way of trying to say that anyone can and will snap once they lose their job. It really undermines how hard Edna worked to keep the family stable the whole time. Couldn’t she have at least gotten her win here? By the end the message is that Mel will once again support them, but Edna had been doing pretty good on her own. A better ending would have been for her to have kept her job with Mel just learning to accept this. As it stands, he didn’t learn to accept anything. Things just finally went his way and he decided to stop sulking. Edna cracking the way she did felt extremely forced and unnecessary.

This movie is at its best when it’s just poking fun at everyone and embracing its comedic elements. For example, Mel’s relatives were handled pretty well. They naturally want to see him get well, but aren’t about to throw their life’s savings at him. In their defense, paying 20,000 to start a summer camp where he would be the head sounds like a terrible idea. This guy’s insane, how can he be around kids? I don’t think it would do him a whole lot of good either. Then the psychologist they got him seems like a scammer who rushes out of the room as soon as the paid hour is up. He doesn’t care about Mel’s problems in the slightest.

Maybe Mel’s plot would have been better if we were ever given a reason to care about him, but he has a sour attitude from the start. He complains about literally everything and just never stops. Rather than seeing the silver lining in a situation he always seeks out the small rip in what’s good. Nothing ever works out for him because he doesn’t see the good in things. Take his vacation to his brother’s place. Mel spends the whole time complaining and trying to leave. He never gave them a chance.

It’s almost ironic that you will probably be rooting for the neighbors in all of their encounters during this film. Mel picks fights with the guys above him and the girls next door. In both cases I would argue that they’re in the right while he’s in the wrong. The girls are just trying to have a good time and they weren’t all that loud as evidenced by the fact that Edna couldn’t hear them. You have to make an effort to be annoyed. Then the neighbors upstairs have little kids who are trying to sleep so having Mel yelling at the top of his lungs late at night is naturally upsetting. They were just trying to cool him off by dunking him with the ice water. It may be a bit drastic, but Mel certainly started it.

The fast paced dialogue is definitely the film’s strength. We do get a lot of witty moments and as I mentioned the humor is quite good when it is trying. Just the sheer fact that the apartment is so run down is a great source for many jokes and such. It’s also good to see New York City from back in the day and how so much has changed and yet so much is the same. It always makes for a good backdrop for any film.

Overall, This movie was pretty fun at times. For the most part it’s a humorous adventure. It just begins to take itself too seriously once Mel goes crazy and never truly recovers from that. Those scenes are just painful to watch and Edna should have been able to have gotten a win at the end. Instead she goes down with Mel and by the end none of them really have their dignity left. I was also expecting them to get more of a win with the shovel once it started snowing, but then the film ends abruptly. In my head canon the neighbors basically won this round since they did blast Mel twice.