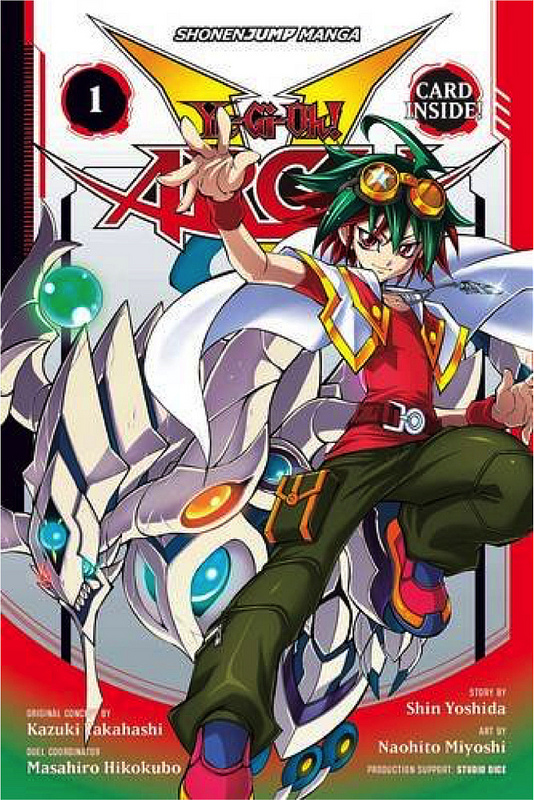 Yugioh Arc V certainly lasted a while but every Yugioh series must end at some point and 7 volumes is a go to number for the franchise. As with the other Yugioh titles this one opted to go for a completely original plot which is always a good idea since you don’t need to experience the same story twice. That being said, It wasn’t quite as engaging as the other spinoffs and from the manga sequels it is probably the weakest. I think it will probably make for a stronger read in volume format but monthly it could feel a little scattershot and rushed at times. As always you can look forward to having nonstop duels though.

Yuya is the main character and he has the spirits of 3 other people inside of him. Like Yugi he can body switch with them at any given point and they help a lot with the duels. Yuya is trying to stop a bunch of time travelers and enemy groups from using the G.O.D. card to wipe out humanity. He then runs into the main heroine Zuzu. She is determined to be his agent so she can make a lot of money. Certainly not the most noble of goals but at least she is trying for an honest living and not exploiting his skills. Can Yuya save the day or will this turn of events prove to be a distraction?

As with most Yugioh titles Arc V starts off rather low key with the stakes and by the end the lead is engaged in cosmic duels. It’s always fun to look at the progression there. I may be getting ahead of myself with the skipping here but the climax is excellent. We get a battle between two G.O.D. cards. Naturally both of them are comically OP with how their special abilities are basically all powerful. Landing a crazy infinite combo is basically all you can do to stop him. All of reality is at stake here since if Yuya loses then it’ll be like nothing ever happened the way he remembered it. Making an alternate reality is always an interesting idea but as the hero will always point out, it’ll always be “alternate” and not the real deal.

The art is pretty solid. It can get a little chaotic at times but not to the point where it would hurt your enjoyment or cause you to get confused. The action is captured pretty well by all of this. The character models are on point as well which is always important. There isn’t much to say about the writing as it is quite good. The name changes from the show can take a little getting used to, as with the characters’ new personalities. There isn’t a lot of time for most supporting characters. They show up for a duel and that’s about it. Technically I suppose that’s probably the case for most of these spinoffs. You only have so much time for duels after all.

The big villain of the series is Eve and she makes for a great final boss. It seems to be a bit of a trend with the final villain being a cosmic lady but I guess having it happen twice in a row may not be enough for a trend. Regardless she has a cool design and a great ace monster in G.O.D. The manga titles have always been on point with the original villains and she is no exception. Her right hand man was also pretty good. He definitely never felt like a big time threat the way that she was though. He was just there to stall the heroes a bit and was successful at his mission.

I do have to question the Adam guy though. He feels like a total villain even though I think the manga was a little ambiguous on that part. He basically goads Decklan into fighting Yuya one last time in the end. The thought was barely in his mind before that happened. I do think that Yuya deciding to destroy the god power right away may have been a little hasty but with how often power corrupts it was likely the right move. Likely the right move…but I was a little more on Declan’s side in the end. He wasn’t going to use the illusion but was hoping he could learn something from the power. It’s something that is worth doing. Imagine the technological innovations such a power could produce. It could be magnificent.

Meanwhile, Declan was pretty good here. I think he was more likable here than in the anime. Technically his character isn’t all that different, but maybe having him be the big final boss here made him feel more like a threat. His plans also seemed more well thought out here as opposed to the anime where it felt like he was on the losing side for a good part of the mental battle between him and the Professor. It goes without saying that Yuya’s dad is better here than in the anime because Yusho was terrible there. He’s one of the few characters where the anime probably dropped the ball a bit. 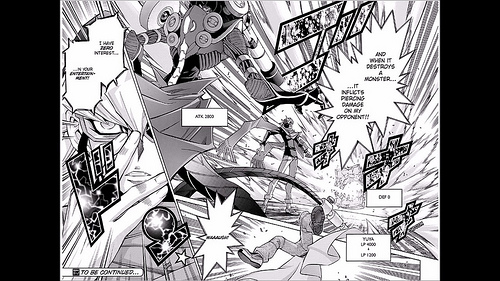 Meanwhile Yuya is definitely a solid protagonist. He has a goal right from the start and stays on the course til the end. He’s a little more serious than his anime counterpart and I dare say that he’s a better duelist at least in the start. That being said, he doesn’t have all the cool rage moments that his anime version had so he loses out there. The manga made the interesting decision to have him share a body with his other universe selfs and dropped the whole universe thing entirely. This was the part I wasn’t a huge fan of, but the whole plot is built around it so for better or worse it was here to stay. It’s interesting having Yuri act as a hero here. All of the personalities were pretty solid, but I’d say that Yugo takes the win here. He was definitely ready to take charge and made the hard calls.

I think Shay and Sora got the shortest end of the stick from all the characters. Shay is nowhere near the calm and collected guy he once was. He’s basically just a crazed lackey here. Sora isn’t much better. He’s at least a bit of a spy and still has skills, but after getting wrecked that’s basically it for him. Silvio’s pretty much the same. I think even if I hadn’t seen the show first I would have had a hard time liking Shay here. Suffice it to say the supporting character roster wasn’t amazing. Zuzu’s pretty decent though. Her decision to become Yuya’s manager is a pretty smart one since that’ll put her in a position to get fame and glory once he saves the multiverse. As for it actually turning out that way…well I wouldn’t get my hopes too high.

As far as the Yugioh spinoffs go Here are my current rankings. The best one is still Zexal then GX then 5Ds then this one. I think the VRains one has a good chance of beating Arc V as well. Again, this is still a great manga but it just wasn’t quite as much fun as the others. The other Yugioh titles simply set the bar a little too high I think. In particular it’s tough for Arc V since it was following Zexal which had an intense climax and around 3 different rivals. Against that, Arc V didn’t even really have a true rival character. Declan was more of an enemy than one after all.

On a more positive note, the manga did fix most of what I didn’t like about action duels in the anime. In the anime it all felt luck based as cards would just happen to be around to save the day. In the manga you know exactly how many cards are on the field from the start and you can only use 1 per turn. This prevents crazy strategies like in the anime where one guy picked up like 6-8 cards in a row and kept on using them. We also get a good amount of normal duels and even one turbo duel to keep it varied. At the end of the day this is still a Yugioh manga so you can expect a lot of amazing duels. Card duels are why I love the franchise so much in the first place and so long as the writing is solid (Which it was) then the manga is destined to be quite excellent!

The ending of the series may come across as a bit rushed. This is mainly due to the fact that the final events come out of nowhere and the ending isn’t really all that satisfying. It’s certainly nowhere near one of the worst endings though. Some aspects of it are pretty hype like the lead-up to a fight that likely won’t ever occur. The timelines possibly being rearranged and people not remembering the characters can be more annoying though. We won’t know any of this per say since the series ends so abruptly, but there’s a chance that things really didn’t go well for some of the heroes here. 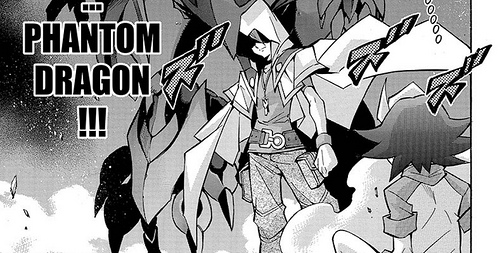 Overall, Arc V is definitely another great Yugioh title to add to the collection. It delivers with a lot of great duels and maintains a pretty epic feel throughout. It reminds you why the Yugioh franchise is just so much fun. Arc V is a complete manga containing pretty much every positive element that you would want to see in such a title.. You’ll be sad to see it go and hopefully the next Yugioh manga starts up soon. I would highly recommend checking this manga out and if you buy the new copies you can even get a rare card. Now that’s a steal!