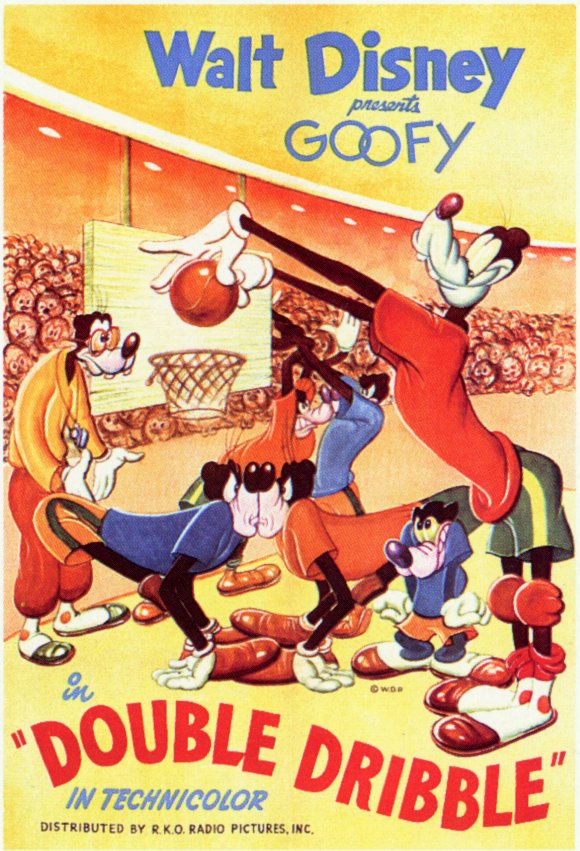 It’s time to look at a Goofy short. I haven’t seen a whole lot of these over the years as typically the specials are about Mickey or Donald. I admit that I assume Goofy’s specials would be the weakest since he definitely isn’t one of my favorite characters, but he’s actually not that bad here. In fact, the special is surprisingly real good and one of my favorites from these retro shorts that I’ve seen.

The plot of the special is all about a big basketball game that is about to start. The home team is heavily favored to win to the point where there is only one guy in the stands for the away team while the other one is packed. Both teams don’t have any real energy though but someone’s got to win. Additionally the blue (away) team has one player who may not be as tall as the rest but he’s got heart.

One interesting thing to note is how the blue team is actually about on par with the red one. I guess their fans didn’t want to pay the ticket prices of going to the away game, but it’s actually not because the team is bad as you may have expected. The game is within 1 point at the final seconds and that’s considering that the team was fielding a bunch of backups by this time. Both teams have basically identical players so this makes sense as well.

Even though the players start out with no motivation they gradually start to get into the game as the special goes on. This leads to a lot of fun tricks like guys appearing out of nowhere and even some crazy bodyslams. I guess even these players can feel that competitive spirit. The guys making the calls in the booth also did a tremendous job of keeping up with the plays on the field since it was all so fast. These guys definitely knew their stuff with the sport.

The animators also probably had a lot of fun here. The characters start out by using realistic basketball moves but by the end they’re using super speed, stretching abilities and all kinds of other techniques. As always Disney presents you with very smooth animations here so it all flows together really well. The fast paced nature of the animation fits perfectly.

Overall, Double Dribble is definitely a great special that I would recommend. It’s a lot of fun and doesn’t drag on. I also tend to enjoy specials that revolve around sports and what better one to show than a quick paced basketball game? If you haven’t seen this one yet then you should change that ASAP. It’s very short too so it’s not like it’ll take you all that much time to give it a whirl.